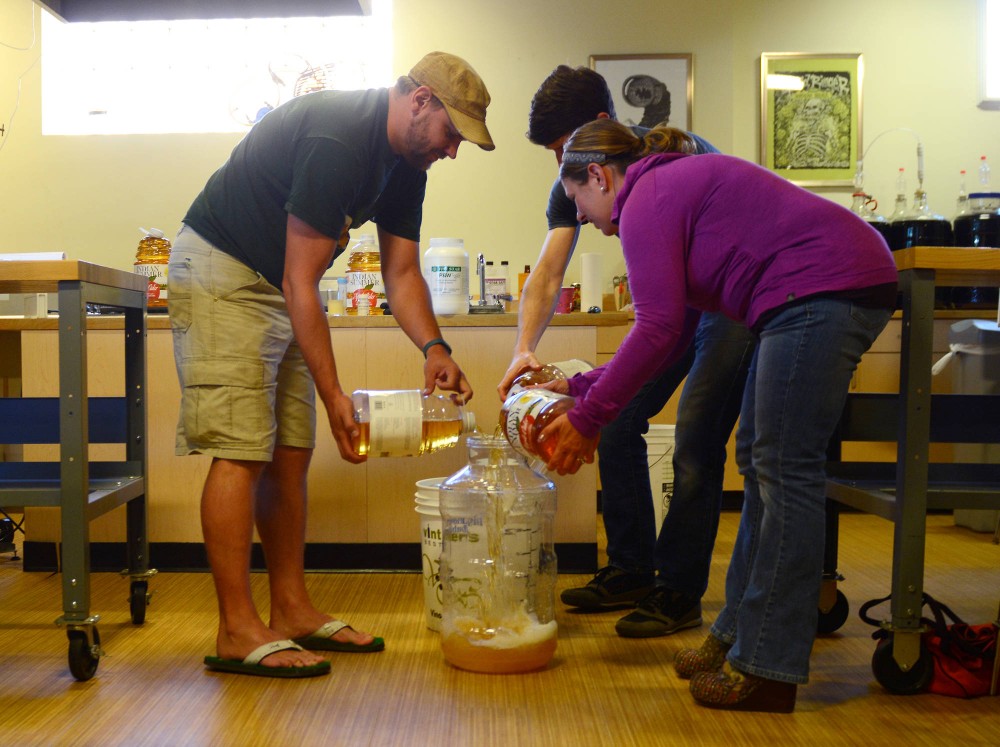 (left to right) Emmet Swartout, Christian Breitbarth and Tia Houseman pour apple juice into a container at a Northern Brewer workshop as a part of the process for making hard cider on Saturday. Breitbarth guided the workshop and has led various other classes at Northern Brewer.

Chance Wellnitz
It’s harvest season, and professionals and home brewers alike are making homemade hard cider from this year’s apples.
“If one of your friends is allergic to bees or yellow jackets, make sure to have an epi-pen,” Christian Breitbarth said to his cider making class at Northern Brewer, “or don’t
invite them.”
As soon as someone crushes their first apple outside for fresh-pressed juice, the insects swarm. Making cider from store-bought juices is much easier and often less costly, but doesn’t come with the same bragging rights.
Once a brewer has the juice, the process is simple: Sterilize the juice if unpasteurized; add sugar to bump up the alcohol content; add yeast to
ferment the juice; then wait. A second round of fermentation can follow for greater control of the finished product, but beyond the basic steps, much of cider making comes
down to preference and practice.
Breitbarth’s class — like all classes at Northern Brewer — is free, and students range from those entirely unfamiliar to home brewing to those who have brewed several times before and are looking for new tips and tricks.
Someone once came into Breitbarth’s class swearing by bleach to clean their equipment. “And that’s why your beer probably tastes like a swimming pool,” he said wryly.
Northern Brewer and Midwest Supplies sell and rent all the equipment needed for home brewing, a hobby people pick up for a myriad of reasons.
Emmett Swartout, who attended an introductory cider-making class, began after taking a class with his family.
“I just liked the process of having a bottle that was unlabeled and it was ours,” Swartout said.
With his wife’s permission, he said he and some friends intend to set up a mini brewery with the extra space in his garage.
Minneapolis’ Sociable Cider Werks started from similarly humble beginnings.
Founders Jim Watkins and Wade Thompson were roommates in college and, upon moving back to Minneapolis, began home brewing, which turned into home cider-making.
Since filing for their LLC in 2011, Sociable Cider Werks is already on the third expansion of their cidery in Northeast Minneapolis — a success Watkins attributes to the local community.
“[Sociable and the other Northeast breweries] wouldn’t exist if there wasn’t such a healthy community of people interested and willing to try new things and drink from a local producer,” Watkins said.
Watkins personally answers technical questions from home brewers via email and on tours of cidery conducted every Saturday.
When starting Sociable Cider Werks, he and Thompson reached out to brewers and cider-makers in the industry, and now he encourages others to do the same.
“We love it,” Watkins said. “We are trying to teach people about great cider, and part of that is getting people to make great cider at home, too.
“[Wade and I] made a bunch of garage batches that were not any good before we started figuring out what we were doing …That’s what’s fun about it: experimenting and learning new things,” Watkins said.
Delete Image
Align Left
Align Center
Align Right
Align Left
Align Center
Delete Heading