The animals were a part of the second annual Agricultural Awareness Day. 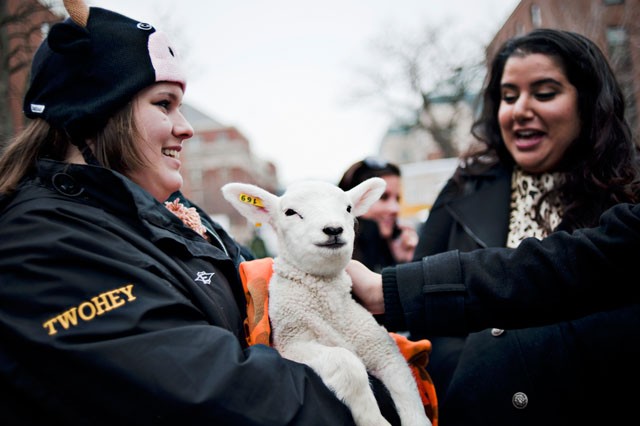 Tuesday afternoon was a star-studded affair on Church Street âÄî Katie Miron, Princess Kay of the Milky Way, was in attendance, and so were Ron, Harry and Hermoine. No, they werenâÄôt the characters of J.K. Rowling famous âÄúHarry PotterâÄù series âÄî they were 10-day-old lamb triplets.
Miron, the 2010 winner of the Minnesota Dairy Princess Program, and the triplets were there to support the second annual Agricultural Awareness Day held by the University of Minnesota Agricultural Education Club.
âÄúWeâÄôre looking to bring a little piece of the agricultural industry into the city,âÄù Miron, a University of Minnesota student, said. âÄúMost people donâÄôt have the opportunity to meet a farmer in their life.âÄù
Kathryn Jones, a University English junior, learned a little about sheep. Seeing the animals on her way to class, Jones decided she needed to stop on her way out.
âÄúI love baby animals,âÄù Jones said.
Jones talked with Theresa Twohey, the sophomore chairwoman of the event, about how the lambs are shown and how the judging can be similar to dog shows.
âÄúDefinitely having the baby lamb is a big way to draw people in,âÄù Twohey said. âÄúI talked to them a lot about the lamb itself âÄ¦ but also agriculture and where your food and fiber comes from.âÄù
Learning about where food comes from and meeting some of the farmers who grow that food is the ultimate goal of the day.
Numerous agricultural groups attended the event, setting up tables and tents along one side of Church Street. Planning for this year began shortly after last yearâÄôs event ended.
Animals from the  St. Paul Campus, as well as visiting animals, were brought for students to see and pet. And pet they did âÄìâÄì students, staff and community members came out of classroom buildings and stepped off sidewalks to get a closer look.
Warren Parker, 3, spent time petting the pig, his favorite animal in attendance.
âÄú[I] like the way it sounds,âÄù Parker said.
Parker came with his mother Shelley Parker, a University staff member, to see farm life while living in the city.
Besides pigs and lambs, there were llamas, sheep, cows, a calf, chickens and a duck.
Two assistant commissioners for the Minnesota Department of Agriculture visited the event as well.
Matthew Wohlman and Charlie Poster, both University alumni, were there to help show that Minnesota is still an agricultural state.
Employing one out of every five people, the agricultural industry is a driving force in the economy, they said.
By connecting the urban with the rural population, visitors were able to educate themselves, something that has been more common as of late.
âÄúPeople are thirsty for more knowledge,âÄù said Julie Tesch, the executive director of the Minnesota Agricultural Education Leadership Council.