Throw us to ‘The Wolves’

The play will complete its second run this weekend. 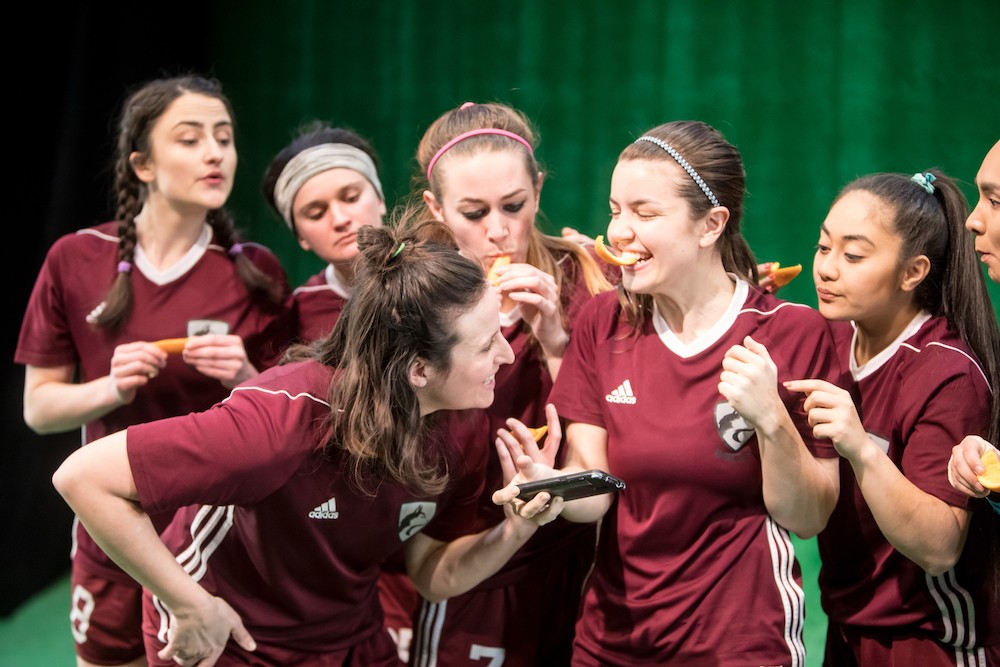 Photo by Dan Norman, courtesy of The Jungle Theater

A group of high-school aged girls sit on a soccer field, stretching. Three simultaneous conversations occur, and one girl throws the word “fuck” around a little more than everyone else.

Surely, this is a scene taking place daily around the world. Girls giggle and gossip, seeds of jealousy are planted and tampons are lended. Next week they’ll be back in the same place, connections growing deeper and deeper each time around.

The cast of Sarah DeLappe’s “The Wolves” consists of 10 women, each character nameless (save for the number on the back of their jersey).

Having originally made its Minneapolis debut last spring, the play, directed by Sarah Rasmussen, is back for a second run — same cast, same crew, probably some repeat audience members.

We’ll throw this out there early — each actor in the Jungle Theater’s rendition of the play is marvelous. The women are hilarious, both obvious and profound in their grasp of a character’s subtleties. Each artist makes you love their character with every bit of your heart.

Six of these women, as it happens, graduated from the University of Minnesota/Guthrie Theater bachelor of fine arts program.

While a majority have shared classroom pasts, the others aren’t necessarily left out. The Twin Cities theater community is fairly close-knit; all members run into each other at one point or another — usually at auditions where they found themselves in the running for the same role.

“Most of the women that are in ‘The Wolves’ I knew from auditioning against them … for, like, the one female role in a play,” said Chloe Armao (#14). “It’s been really exciting to actually work with [these women]. … There really isn’t an environment where you have nine young women all working together.”

As it happens, this is one of the best parts of “The Wolves.” All actresses are offered equal play time; favorite characters depend on an audience member’s mood — whoever they, for one reason or another, best connect with that night.

Dialogue, too, can be heard differently based on the viewer’s specific interest. With multiple voices constantly chiming, it’s hard to walk out of “The Wolves” without wanting to sit through it again.

The show follows a traveling indoor soccer team, the titular Wolves, as they make their way through a season. Set on turf, scenes capture the team’s pre-game stretches and conversations.

Though specific in concept — it’s about this team, this place, these girls —  universal themes jump out. There’s friendship, family, relationships, otherness, the sound you make when you fit a whole orange slice in your mouth.

After every show, cast members host a discussion with the audience. Topics vary based on the night, but a few comments have stuck out.

“It’s always my favorite feedback to hear from young women in the audience … about the agency they feel, the ownership they have over this play,” said Rosey Lowe (#8). “It’s about them.”

Armao and other cast members agree.

“There was one girl [who said] something to the effect of being surprised that her life was interesting enough for someone to write a play about it,” Armao said. “I think that’s really important, especially at that age. To be like, ‘Yes! It is important enough and interesting enough. As a society we’re invested in your experience as a teenage girl.’”

This sentiment shines through the show’s characters. As girls growing up in modern America, the relatability of their experience(s) is obvious. Yet, regardless of universality, each girl is absolutely herself. Tropes be damned, #00 is the only #00 in the world, and #25 is the only #25.

“They’re all complex and they all have an arc and they’re all interesting in their own right,” Armao said.

Timeline-wise, the actors aren’t too far gone from the days captured in the play. They can draw from their own experiences as teenagers, whether they were on organized sports teams or vying for that one female lead in the school play.

“I used to look back on that time in my life with a lot of embarrassment. [I’d think], ‘What was she wearing? Why did she do her makeup like that?’ I’d separate her from the person I’ve become,” said Meredith Casey (#2). “Doing this play has made me look at her with a lot more empathy. I can accept her as part of my story, and be more compassionate for the journey of being 16 and 17.”

A second run of a beloved show, with the same cast and crew, is a pretty rare occurrence in the Twin Cities theater community.

It happened with “The Wolves.” Thank goodness.

A third run, though? We can wish but … we suggest getting there this weekend.

When: Now through Sunday