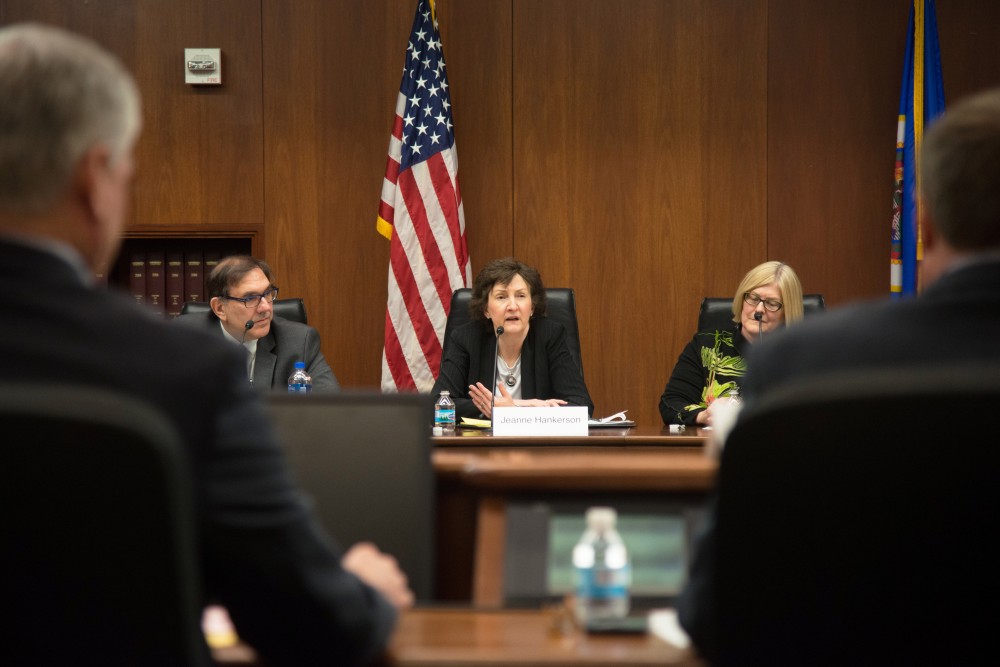 Jeanne Hankerson, center, answers an audience question about tuition during the 2018 Regent Candidate Forum at the State Office Building on Wednesday, April 25.

Candidates vying for a vacancy on the University of Minnesota’s Board of Regents met at the State Office Building in St. Paul on Wednesday to discuss their visions for the school’s governing body.

The forum, hosted by the University of Minnesota Alumni Association, served as a chance for University leaders to hear from candidates seeking Regent Patricia Simmons’ vacant seat following her resignation last month. The candidates discussed tuition, administration, student issues and the University’s relationship with the Legislature. In the coming weeks, lawmakers will be tasked with electing a regent before session adjourns on May 21.

“I wanted to give candidates an opportunity to address the major issues a governing body deals with,” University of Minnesota Alumni Association President Lisa Lewis said. “These are important roles that affect the state and people’s lives. Candidates fielded questions from an alumni association moderator before taking questions from the audience. All candidates listed tuition and student debt as a top issue facing the University. The five candidates are Mary Davenport, Brooks Edwards, Jeanne Hankerson, Wendy Shannon and Randy Simonson.

Shannon, director of the Graduate Induction Program at Winona State University, said welcoming diversity at the University is one of her priorities.

“Increasing the number of diverse students the University serves is very important, and that includes international students,” she said.

Candidates were also asked how they would make sure all University campuses work in unison to meet common goals.

“[The strategic plan] … would provide guidance within the system about how assets are distributed once they’re available and [make] sure there’s coordination and minimal duplication of effort between the various campuses,” she said.

He said the University should work with other campuses in Minnesota to bring researchers together. “The medical schools is sort of at a crossroads right now.”

Candidates were also asked how they would lobby for funding at the Legislature when the Minnesota State system has traditionally received more of their requested allocations.

Davenport, interim president of Rochester Community and Technical College, said the University needs to be transparent about its spending when asking the Legislature for state funds.

“Both [systems] have missions, and those missions are not competitive,” she said. “[The schools] have very different needs, and we need to justify that as we talk to the Legislature.”

The regent elected will also be a part of the board that elects the next president of the University.

Simonson, director of Prairie Holdings Group in Worthington, Minnesota, said the next president should have financial experience and be able to navigate a global environment.

“We are a global University. We work with institutions around the world,” he said.

Rep. Bud Nornes, R-Fergus Falls, chair of the House higher education committee, said there is no clear choice among lawmakers right now. He said dates will need to be set soon for a joint convention in order for a regent to be elected.

“It was an introduction, a starting point,” he said. “The candidates were prepared and ready.”