The Minnesota men’s team led 3-0 early Sunday against Purdue, but a charge by the Boilermakers made things interesting. 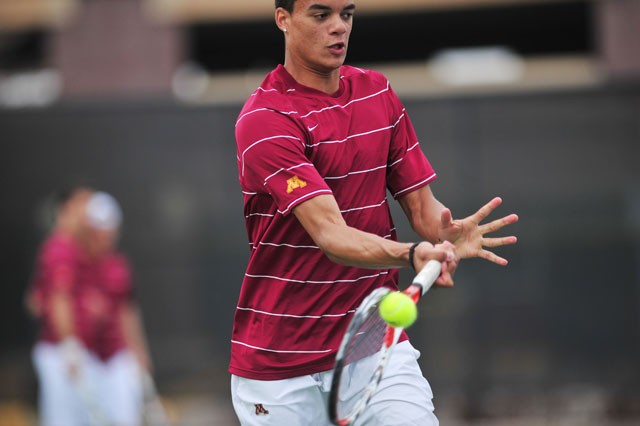 Sophomore Brendan Ruddock volleys the tennis ball at the Baseline Tennis Center against Purdue on Sunday.

After jumping out to a 3-0 lead Sunday, it appeared the Minnesota menâÄôs tennis team would cruise to a much-needed victory over Purdue.

In the matter of an hour, the Gophers watched their 3-0 lead dissolve and found themselves tied at 3 with the Boilermakers, the outcome contingent on the No. 6 singles match, where an unlikely hero rescued the Gophers from near-catastrophe.

After splitting the first two sets, MinnesotaâÄôs Michael Sicora and opponent Pawel Poziomski held serve to four games apiece. Sicora then proceeded to take the lead 5-4 by holding serve yet again, giving himself the chance to clinch the match for his team by breaking PoziomskiâÄôs serve.

Sicora went up 40-15, and had double match point coming his way, but the sophomore from Purdue remained persistent and forced deuce.

âÄúI knew it was down to me, and I thought, âÄòJust play solid and get a lot of balls back,âÄôâÄù Sicora said. âÄúIt was so windy out. The person that got more balls in was going to win the match. ThatâÄôs what I did, and it worked.âÄù

It was a big win for Sicora and Minnesota. In just his second singles match of the year, the junior clinched the victory against Purdue to prevent the Gophers from dropping back-to-back matches, as No. 27 Indiana handed Minnesota its third loss of the season and first in Big Ten play just two days prior.

âÄúItâÄôs Big Ten season. Any win is a big win,âÄù head coach Geoff Young said of his teamâÄôs performance. âÄúWe did enough to get the âÄòW.

âÄúIâÄôm really happy for Michael. Those [matches] are never easy to play. Those can get interesting, he did a great job.âÄù

Added Sicora: âÄú[The win] was necessary. Two losses in a row in the same weekend is tough for any team. For us to get a win and split the weekend is definitely a good sign for us.âÄù

Tough weekend for the women

After snapping a seven-match losing streak last Sunday, the Minnesota womenâÄôs tennis team dropped back-to-back matches against Purdue and Indiana. The losses push the GopherâÄôs record back to 5-13 overall and 1-5 in the Big Ten.

The men were without the services of Sebastian Gallego this weekend. The senior and two-time team MVP has been dealing with a foot problem that will keep him out indefinitely.