A&E sat down with Minneapolis comedian and magician David Harris to a talk magic, comedy and how the two interact. 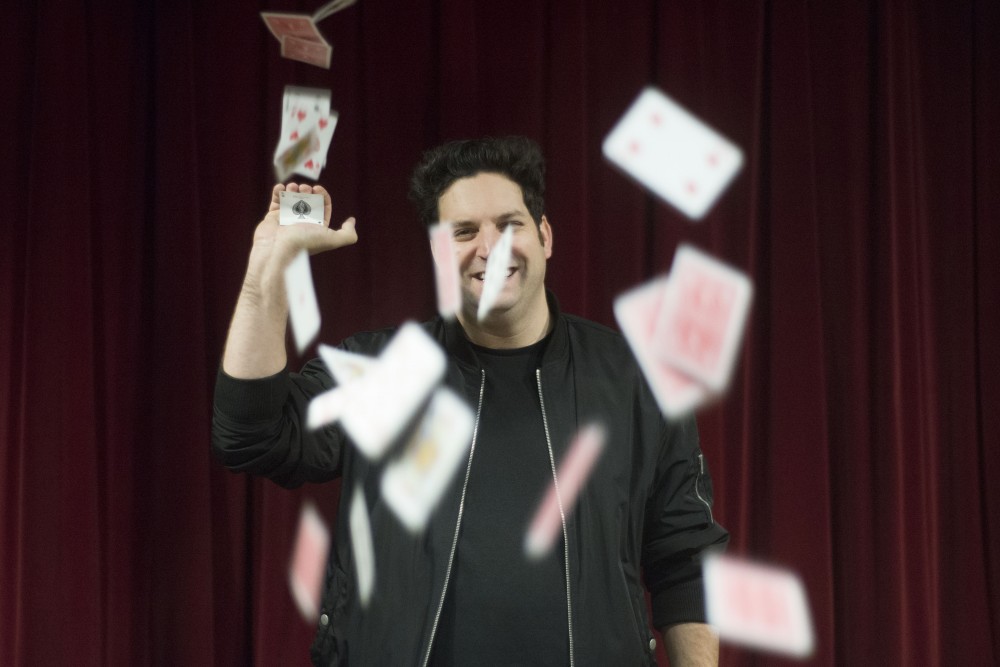 Cards rain on magian David Harris as he poses for a portrait at Bryant-Lake Bowl and Theater on Friday, Dec. 9, 2016.

If you want to find a stand-up comic in Minneapolis, all you need to do is walk up to the nearest person and ask. You have a fifty-fifty shot they’ll know one.

But if you’re trying to find a magician, you may have to look a little harder.

In the Twin Cities, the name David Harris has legendary — even mythical — significance among magicians.

So, to expose Daily readers to the wonderful world of magic, A&E sat down with Harris for a Q&A.

When and why did you start doing magic?

I always loved entertaining people. I had done little tricks and things when I was seven years-old with a Fisher-Price magic kit, and this kit my grandma had bought me off the television.

And then I was at one of my grandma’s parties and there was this magician who stuck a needle through a balloon but it didn’t pop. I remember that left a huge impact on me.

As a teenager, I realized I could make real money from performing magic. My parents were having job struggles and I was able to make almost as much money as them.

Eventually, I found myself at magic conventions, learning from older magicians and studying tricks from books.

What type of magic were or are you into performing?

Real magic. Now I do the real kind. No, seriously, I was fascinated with getting attention growing up and I would do magic for anyone that would watch. I remember the magic I was attracted to was the type that would impress the adults at the bar. Card tricks, coin tricks, tricks with napkins.

I copy what other magicians have taught me, basically. That’s sort of the way magic works: you put your own little spins on things.

I do prefer the stage because you can create something with a different type of impact.

How did you get into comedy?

I always had jokes in my act, and at one point my entire act was a joke. I was the class clown, the class magician and the class president. That’s when I peaked.

For me, when something bad happens in your life, you gotta write comedy or you’re gonna cry. When I was a kid, the first person I latched onto as a performer was Johnny Carson, and he was both a comedian and a magician as a kid.

Why do you think comedy and magic go so well together?

Magic is all about secrecy and hiding. Comedy is all about vulnerability. In some ways, they don’t seem to go together. But I think they can play off of each other. Like, you have to let the magic moment breathe and enjoy that moment before you start another joke.

What advice would you give to someone who wants to get into magic or comedy?

Go do something else.

I guess it’s a cliche answer, but you really have to love it. You’re not necessarily gonna make a ton of money. I’m lucky cause I do corporate events so I sell out a little.

I guess I learned that you just have to really put the work in. It’s not gonna just happen out of nowhere. To do anything well you have to put the time in. I got that advice from Louie Anderson.

Has anything ever gone wrong during a show?

It happens all the time, but most of the time the audience doesn’t know. Sometimes you’ll get a heckler and you get frustrated because you drove eight hours and then see seven people spread around the room in a North Dakota bar who didn’t think they would be seeing magic or comedy that night.

One time I wasn’t connecting at this gig somewhere in the farmland of South Dakota. I was doing this card trick to this man who wasn’t responding. So I said, “What is he, deaf?” and someone in the audience said, “Yeah, he is.”

You can find David Harris at the Joke Joint Comedy Club in St. Paul on Dec. 22 and 23, and at his typically sold-out show Modern Vaudeville at Bryant- Lake Bowl.

Editor’s note: This interview has been edited for length and clarity.