The Gophers head into the Midwest Regional ranked No. 3. The top-two finishers from the race will advance to the NCAA Championships. 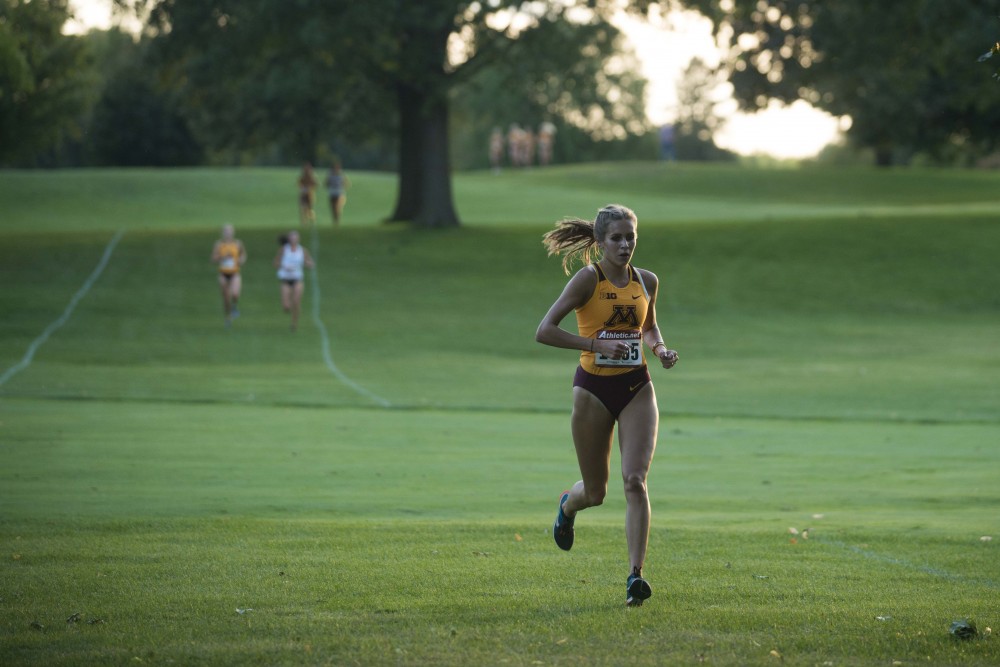 Redshirt Sophomore Anastasia Korzenowski holds the lead during the Oz Memorial on Friday, Sept. 6. Both Men's and Women's teams earned first place in the meet.

Coming into the 2019 season, the Gophers women’s cross country team knew different runners would need to step up to help the team continue its success.

The Gophers have also competed without their top two runners from last season in Megan and Bethany Hasz. The Hasz twins redshirted this season to prepare for the track season and will compete in cross country next season.

But head coach Sarah Hopkins was confident other runners would help lead the Gophers this season. Anastasia Korzenowski, Abby Kohut-Jackson and Jaycie Thomsen all competed at the NCAA Championship meet last season and have improved as the season has progressed.

At the beginning of the season, Hopkins said the team was very motivated despite competing without some top runners from a season ago. She also has a different approach than most coaches when trying to get the best out of her runners.

“They do have very high goals for themselves as a group,” Hopkins said. “For me, as a coach, I usually let them set their own goals because I feel like it is more powerful for them to come up with their own goals [rather than] me giving them goals and them just trying to do what I think they’re capable of. They have to own their goals and make sure that’s something they buy into every day.”

According to redshirt sophomore Tate Sweeney, one reason the team remains so motivated is the tradition of success in Minnesota’s cross country program. The women’s team has advanced to the NCAA Championship in 13 of the 14 seasons while also remaining competitive in the Big Ten conference. Kohut-Jackson said the team culture for the Gophers has also played a significant role in the team’s motivation and success.

“It’s great because we’re all so competitive, and we’re able to channel that energy, but then it’s even better because we want to see each other do well,” Kohut-Jackson said. “We can go head-to-head and battle it out in a workout, and then afterwards we’re laughing and having fun that keeps us having fun with it which is a big part of getting better.”

By staying motivated, the women’s cross country team has remained a successful program this season. The Gophers are currently ranked third in the NCAA Midwest Regional with the opportunity to qualify for the NCAA Championship meet with a top-two finish at the Midwest Regional meet on Friday, Nov. 15.