Minnesota overcame an opening game loss to Baylor to make it to the championship game. 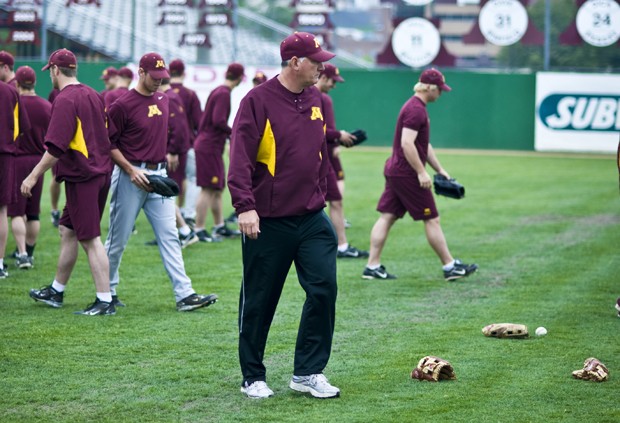 ThereâÄôs little doubt that Minnesota baseball head coach John Anderson was one of many looking forward to this season after the train wreck that was the GophersâÄô 2008 season. And although MinnesotaâÄôs 2009 season came to a grinding halt Sunday with a 10-3 loss to Louisiana State in the NCAA Baton Rouge regional final , heâÄôll certainly still take it. âÄúIf youâÄôd have told me at the end of last season that weâÄôd be 40-19 and playing the level of baseball that we did, IâÄôd surely have taken it,âÄù he said. With a runner-up regular season finish in the Big Ten and an appearance in the Big Ten tournament and NCAA regional championship games, the bitter memories of the GophersâÄô worst season in more than 60 years were erased as Minnesota returned to the form thatâÄôs become expected of AndersonâÄôs squads. If 2008 was a collapse, 2009 was something to build on. âÄúThey played pretty consistently and at a pretty high level for 59 baseball games, and thatâÄôs hard to do sometimes,âÄù Anderson said. Of course, the day after the season ends, the next one begins. But looking too far forward would be a mistake, because the building blocks the Gophers will have to work with in 2010 remain unclear. At first glance, they look to be in great shape. Just five players will be lost to graduation and, of those, only three âÄî designated hitter Matt Nohelty and starting pitchers Tom Buske and Chauncy Handran âÄî saw consistent playing time. But two weekend starters and a career .366 hitter will surely be missed; couple that with questions about whether juniors Eric Decker and Derek McCallum will return for their final year of eligibility, and Minnesota may have some major holes to fill. McCallum, a junior second baseman from Shoreview, Minn ., is fresh off one of the more remarkable offensive seasons in Gophers history. Along with his single-season record of 86 RBIs, McCallum recorded the sixth-highest batting average (.409) and slugging percentage (.741) in school history, the fourth-best hit total (95), and the third-most home runs (18) and total bases (172). He will almost surely be selected in the 2009 Major League Baseball first-year draft, which runs from June 9-11. Whether he signs with a team remains to be seen, but needless to say, should he choose to forego his senior season, Minnesota will miss him dearly. Perhaps even less likely to return to the GophersâÄô lineup is fellow junior Decker, a centerfielder from Cold Spring, Minn. Decker was drafted by the Milwaukee Brewers in the 39th round in 2008 , but itâÄôs likely that football will keep him from returning as a senior. Decker has insisted for months that he has yet to make a choice between football and baseball, but after setting a slew of school records last fall and being named a Biletnikoff Award finalist, given annually to college footballâÄôs top receiver, his future looks brighter on the gridiron. If thatâÄôs the case, thereâÄôs little chance that Minnesota will have its speedy centerfielder next season. Anderson said the Gophers could be losing a lot of quality players should Decker and McCallum leave, but he said the team will find a way to replace the departed. âÄúI do think we have more numbers of quality players that maybe not one guy can replace [McCallum, Decker, Nohelty and Buske], but maybe combinations can,âÄù Anderson said. âÄúThatâÄôs going to be our challenge, to try to find a little more depth in our team, but itâÄôs really there.âÄù In fact, with freshmen that redshirted this season becoming available and a new class coming in, Anderson goes so far as to say MinnesotaâÄôs roster will be stronger next season, even if it loses that core group of players. âÄúI think weâÄôre going to have a better 25-man roster next year than we had this year, no question about it,âÄù he said. âÄúWeâÄôre going to have more options and choices.âÄù