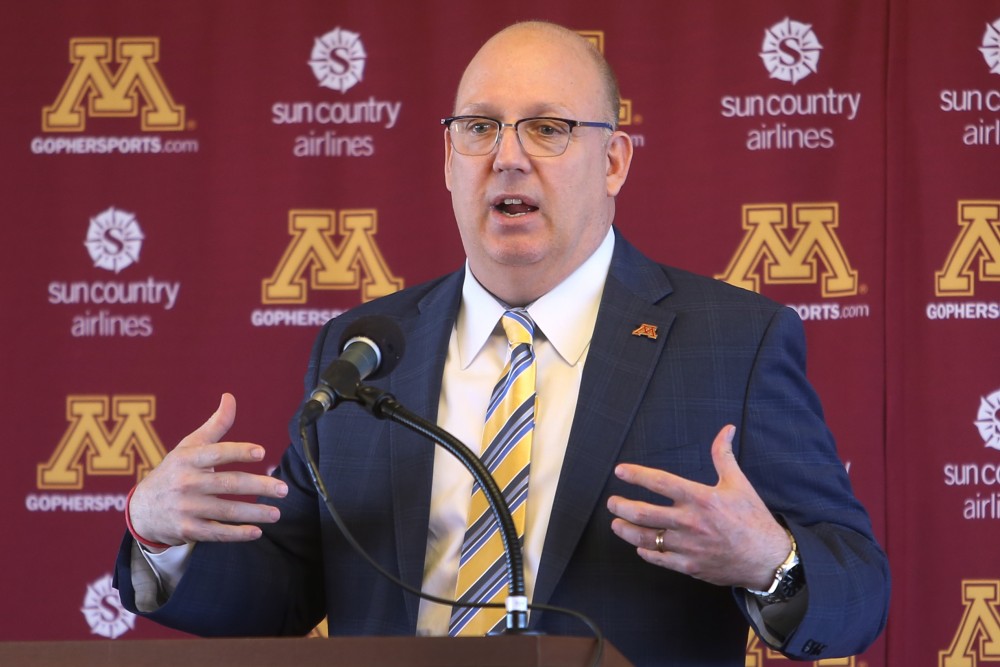 Bob Motzko has had a busy week.

Motzko’s St. Cloud State men’s hockey team was upset in the first round of the NCAA Tournament on Friday.

The coach said, the day after the loss, he received a phone call from the Gophers.

Minnesota had just lost its head coach, Don Lucia, after 19 seasons at the helm. The Gophers made the announcement official on Tuesday — Motzko would leave the Huskies behind and replace Lucia as the new head coach.

Now in his third stint with the Gophers, Motzko took part in a introductory press conference Thursday. He made statements regarding his past, present and future with the Gophers after he left St. Cloud State, his alma mater. He said the team will play fast and skilled, but will add toughness to the team.

“I told the team yesterday that the first thing we have to do is be humble,” Motzko said. “We’ve got to find a way to have a little humility into how we act. We’re going to roll up our sleeves and go to work.”

In his introductory press conference, Motzko spoke in front of the last two Gophers coaches, Lucia and Doug Woog, who were among those in attendance. Motzko said he has taken a lot from many former Minnesota head coaches.

He said, when he was a coach in the United States Hockey League, he would go to Minnesota practices and have Woog explain drills to him. He was also an assistant coach to Herb Brooks while he was at St. Cloud State and an assistant at Minnesota under Lucia for the program’s 2002 and 2003 national championship runs. As a player, Motzko said he tried out for the Gophers hockey team twice, but was cut by then-head coach Brad Buetow both times. He transferred to St. Cloud State to finish his playing career and eventually start coaching.

“One thing I talk all the time to our student-athletes and to our staff is, we want to be about low-ego and high-output,” Coyle said. “I call that humility and Bob Motzko represents that in everything he does.”

Motzko will have the entire summer to figure out how to prepare for next season. The Gophers recently had two early departures with former players — Casey Mittelstadt and Ryan Lindgren, plus the seniors who graduated.

Now, Motzko said there are some holes that need to be filled and more players need to be added to the roster.

“I fully understand what’s in front of me,” Motzko said.