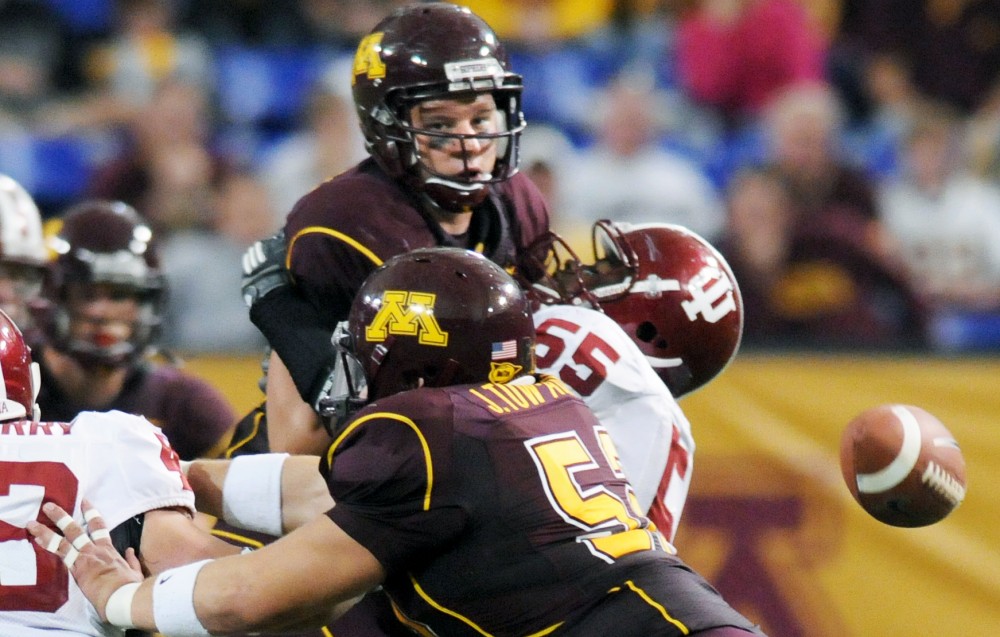 Amid the joy of beating Indiana 16-7 was a nagging feeling among Gophers players. They couldâÄôve won by a lot more. âÄúI think we couldâÄôve had four, five, six more touchdowns,âÄù junior receiver Eric Decker said. âÄúWeâÄôll have to fix that next week.âÄù For the first three weeks of the year, the Gophers were the only team in the nation to score a touchdown every time they were inside the 20-yard line, or âÄúthe red zone.âÄù They scored just one touchdown in four chances Saturday . âÄúWe have to score touchdowns in the red zone,âÄù head coach Tim Brewster said. âÄúThatâÄôs something we were doing really well, and we have to get back to it.âÄù The Gophers took the opening kickoff and moved slowly but efficiently down the field with a series of short passes and runs from freshman DeLeon Eskridge . After a completion to Decker, the Gophers had first-and-goal from the 8-yard line and a chance to take an early lead . Instead of looking again for Decker, who already had five catches on the drive, the Gophers called two consecutive run plays for Eskridge, who was stopped for one and three yards, respectively. On third down from the 4-yard line, quarterback Adam Weber was sacked. The field goal snap was skipped and Joel MonroeâÄôs kick went off the left upright. After 16 plays, 68 yards and more than nine minutes, the Gophers had no points . âÄúThat right there is why you score touchdowns in those situations,âÄù Decker said. âÄúAnything can happen on a play like that, and we donâÄôt want it to get to that.âÄù In another crucial situation in the third quarter, with the score tied 7-7, a 53-yard pass to Eric Decker again put the Gophers at the 8-yard line. Weber missed a pass to Eskridge, was sacked for four yards and, on third down, had to throw the ball away to avoid being sacked again . They settled for a field goa l. On the next drive, they made it to the 17-yard line before Eskridge fumbled . âÄúWe had a couple plays that weâÄôll watch on tape and kick ourselves in the shins, no question,âÄù Weber said. âÄúThankfully our defense was able to hold them.âÄù With offensive linemen Dominic Alford and Ned Tavale starting their first game since missing time with injuries, Eskridge had few holes to run through and Weber was hurried for most of the game. Weber was sacked four times , including the two big losses in the red zone. Eskridge averaged just 2.6 yards per carry and had just five yards on three carries in the red zone . âÄúWe did not do a good job protecting today,âÄù Brewster said. âÄúThatâÄôs something weâÄôll have to clean up.âÄù Las Vegas casinos had the gameâÄôs betting line âÄî the combination of both teamsâÄô scores âÄî between 58 and 60, which the teams didnâÄôt combine for half of. With their defense playing its best Big Ten game in four years , the Gophers offense was left wishing it couldâÄôve gave a more impressive score. âÄúThe game couldâÄôve went a whole different way,âÄù Eskridge said. âÄúThe defense played their heart out and gave us a lot of opportunities, so if we just took a chance and came through, the score wouldâÄôve been a lot different.âÄù