No. 2 Ohio State asserts its dominance

In singles, the Buckeyes won every set but one. 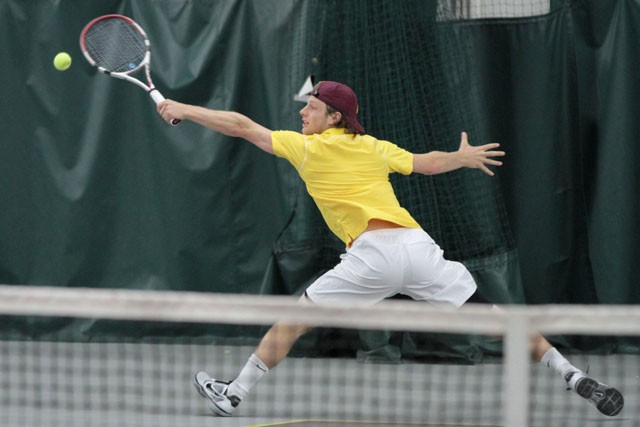 Minnesota entered this past weekend with just four matches remaining on the schedule, and with postseason implications on the line, each of the four would be important.

First on the agenda was unranked Penn State, and the Gophers made sure to handle business.

Minnesota jumped out to a quick 1-0 lead by sweeping the doubles matches, Julian Dehn tacked on another point after winning 6-3, 6-3 in No. 5 singles and Phillip Arndt was quick to follow, posting a 6-2, 6-4 victory in No. 4 singles.

Rok Bonin clinched the match for the Gophers with his 6-4, 6-2 victory in No. 2 singles, giving the team the deciding fourth point.

Tobias Wernet and Michael Sicora tacked on wins to give Minnesota a 6-1 victory, with Brendan Ruddock being the only player to drop a singles match.

Sunday against Ohio State, however, was a completely different story.

The Buckeyes came to Minneapolis sporting a 73-match win streak in Big Ten play, and they were every bit as good as advertised.

The beat-down began in doubles, as Ohio State jumped out to a 1-0 lead by taking two of the three doubles matches.

It would continue in singles, as the BuckeyesâÄô lineup featured six players ranked in the ITA Top-125.

No. 12 BuchananâÄôs victory featured an array of cross-court volleys, pinpoint shots down the line, and overpowering serves that often didnâÄôt allow a return.

Ruddock was defeated in straight sets as well in No. 4 singles, as was Bonin in No. 2, clinching the victory for Ohio State.

Sicora, Dehn, and Arndt would go on to lose their matches as well, with Arndt winning the only set of the day for Minnesota in singles.

âÄúItâÄôs a good match for us to look at the film and see where we could do some things better,âÄù head coach Geoff Young said of the loss against Ohio State.

âÄúGuys are playing good tennis, and [when] you play against some of the best players in the country, you get a chance to really see what you need to work on.âÄù

The womenâÄôs team lost two more matches this past weekend. After falling to Penn State 4-3 Friday, the Gophers were dismantled by Ohio State on Sunday 6-1.