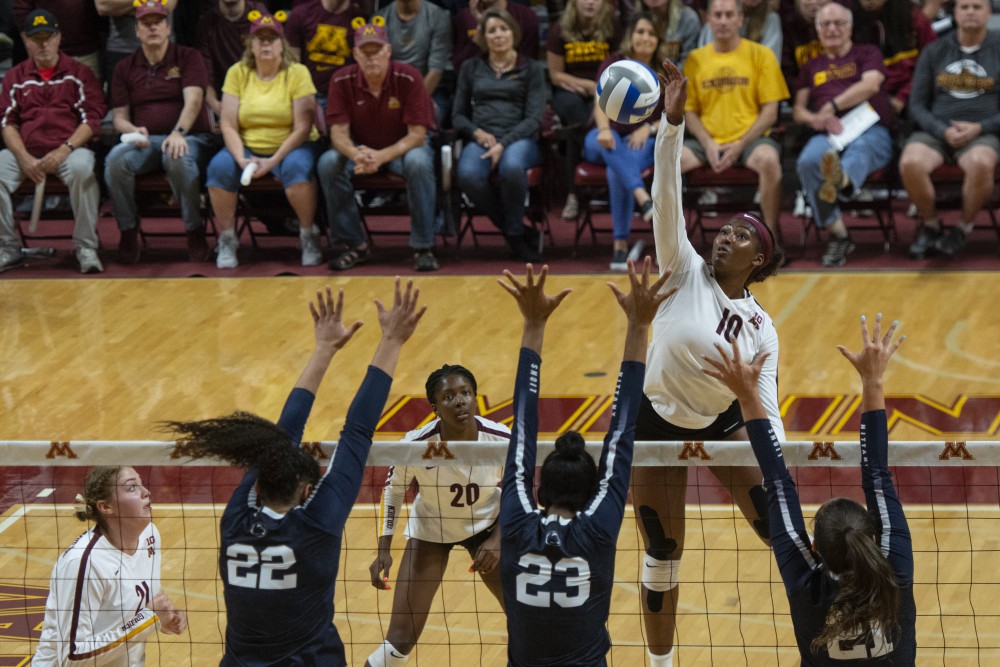 Opposite hitter Stephanie Samedy jumps for the ball during the match against the Nittany Lions on Wednesday, Sept. 19 at Maturi Pavilion.

No.7 Minnesota kicked off the Big Ten season with a victory over No. 4 Penn State Wednesday, sweeping the Nittany Lions 3-0 in a deafening Maturi Pavilion that held 5,500 fans.

The Gophers were led by freshman outside hitter Adanna Rollins, who had her first career double-double with 13 kills and 11 digs.

“I’d like to say I’m surprised but I’m not, Adanna is a really good volleyball player,” McCutcheon said.

Sophomore opposite hitter Stephanie Samedy was also a major factor in the win having 18 points off of 14 kills.

In a competitive first set, the Nittany Lions started off scoring four of the first six points. From then on it was a battle for every point. Eight consecutive points went back-and-forth between the two teams, leaving the score at 7-7. It continued to be a battle as the score increased to 15-13 in favor of Minnesota.

After a few hard-fought points by both sides, the score was 19 all. The Gophers scored six consecutive points to put them ahead 23-19.  A block by junior Alexis Hart gave the Gophers their first set point of the match.

Penn State answered back and trailed the Gophers 24-22. The next play, Morgan ended the set off a powerful spike putting the Gophers ahead 1-0 in the match.

“I thought our consistency was really impressive,” McCutcheon said. “It’s a really important skill for us.”

The Nittany Lions began the second set winning five of the first eight points swinging the momentum. The Gophers fired back and eventually tied the set at 12.

Morgan, like McCutcheon, credited being consistent and the mindset of focusing on the next point for the teams success.

A Rollins kill ended the second set at 25-21, putting the Gophers ahead 2-0 in the match. Samedy and Rollins both had five points in the set.

Rollins was playing in her first Big Ten match and said she was prepared for the intensity.

“it was exciting but I think I was more calm then I was tense,” Rollins said. “There was so much going on so I thought being calm was the way to go.”

The Gophers kept a five-point lead late into the set when the score was 22-17. Minnesota eventually won 25-19 and swept the Nittany Lions. Samedy had 5.5 points in the final set.

McCutcheon said he was proud of his team’s ability to close out each set and says they have improved vastly throughout the year.

“We were more disciplined and more able to execute at a higher level today than we were a couple of weeks ago,” McCutcheon said.

“Onto the next one. Its the Big Ten, there are no days off,” McCutcheon said.