University research and finances are strained under the government shutdown, officials told Smith. 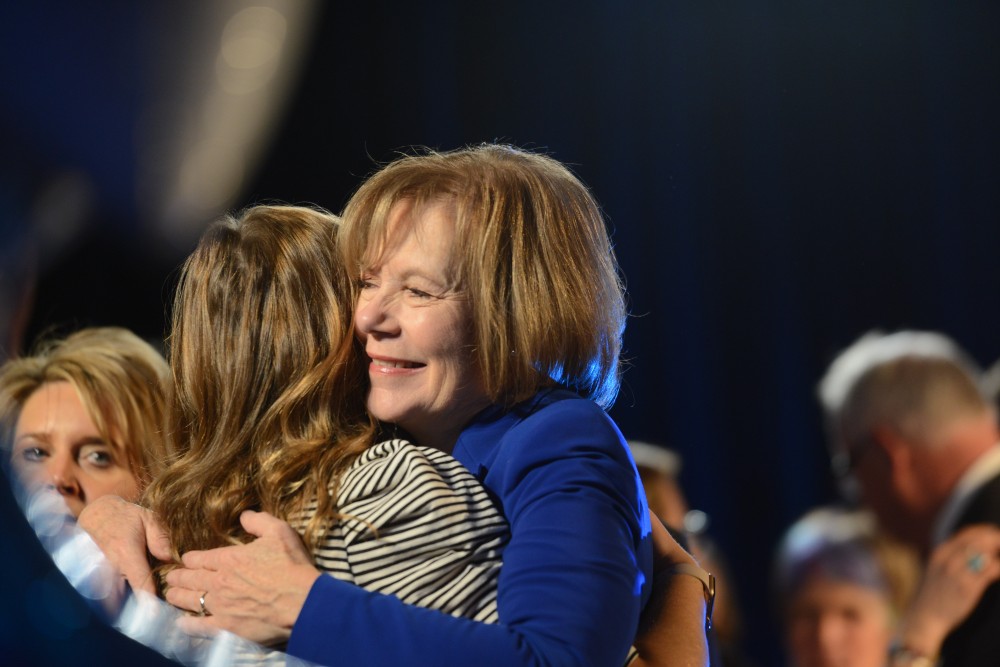 Tina Smith hugs a supporter during the DFL election party in Saint Paul on Tuesday, Nov. 6.

Representatives from departments like One Stop Student Services and the Polar Geospatial Center said the shutdown affects research projects, student loans, agricultural projects and a number of other University programs. Smith said President Donald Trump and Congress need to reopen the government and work toward immigration reform.

University research institutions are finding that many research projects, some of which are time sensitive, are being put on hold during the shutdown. This impacts farmers, researchers and students whose work and pay depend on research.

The University is spending $500,000 a day to compensate for a lack of federal funding during the shutdown, said Assistant Chief Financial Officer Mike Volna at the meeting. The total cost was about $10 million as of Jan. 18, with a projected $12.5 million by the end of the month. Volna said the University expects the federal government to reimburse this funding.

“All of these activities that should have been going on for the last month, of course, haven’t been,” said Associate Vice President for Research Administration Pamela Webb at the meeting. “So, you’re going to have a huge backlog, the federal government will, of projects that need to be funded, need to be awarded [funding].”

The government needs to reopen, taking the pressure off government workers, before a reasonable conversation about immigration reform can be had, Smith said.

“We should not be doing that behind the scenes without a full conversation about exactly how that works,” Smith said to the media. “And the people that we heard about today shouldn’t be used as bargaining chips in that conversation.”

While Smith said she will not vote for the president’s most recent proposal to end the shutdown, she is optimistic a bipartisan agreement can be reached.

“Earlier this year, Democrats and Republicans together came up with a proposal to reform immigration that included a path to citizenship for Dreamers and more border security, and the president shot it down,” Smith said. “But there is effort and energy in the Senate and the House, I think, to pass something strong. We just shouldn’t be doing it in these circumstances.”