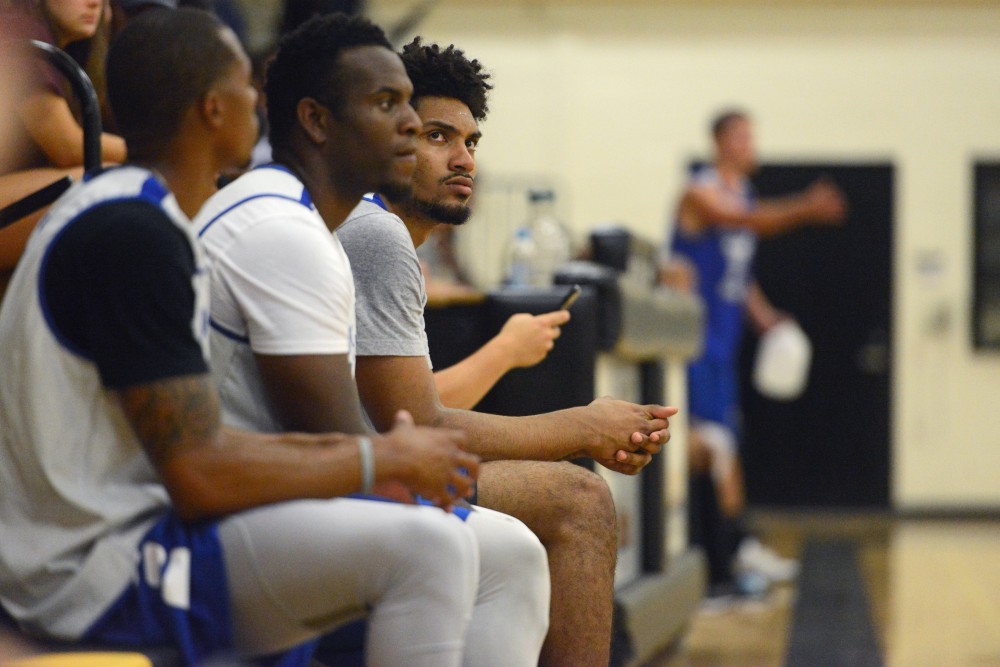 Junior Jordan Murphy looks around during the Pro-Am tournament on Wednesday, July 26 at DeLaSalle High School.

After a recent exit from the Pro-Am league Monday, Gophers basketball player Jordan Murphy is ready to get back to the collegiate season.

Murphy played in the Twin Cities Pro-Am League this summer, a basketball league with professional and collegiate players, alongside many of his fellow Gophers teammates. The team is coming off a year where they went 24-10 and lost in the first round of the NCAA Tournament.

“The Pro-Am is really big for us as a team,” Murphy said. “Every time we see each other on the schedule, we basically [are] really competitive and always talking trash to each other … in the locker room, making sure we give each other our best shot.”

Twelve Gophers players are in the league, two on each of the six teams.

Murphy’s teammate from Minnesota is someone he hasn’t played with yet, freshman Isaiah Washington.

“[The league] gives us stuff to work on,” Murphy said. “Basically, work on defense, work on some of your offensive game as well, and make sure to work on stuff that we would really like to try during the season.”

Murphy is originally from San Antonio, Texas, where he scored almost 24 points per game at Brennan High School.

“Being far away from home, being away from my parents [was a tough transition],” Murphy said. “I’m so used to them being at all my games, [so] them going to none of them my freshman year was something I really had to get adjusted to.”

Murphy said they watch his games on TV, but it was hard to get used to not seeing them in the stands when he played.

Not just his parents’ presence, but also their advice, especially his father Bernard’s, is farther away now too.

Murphy has been with the Gophers for two seasons, and he has quietly improved his game.

The junior forward was fourth in the Big Ten last season with 300 total rebounds, averaging almost nine per game.

The season before, he averaged eight rebounds per game to total 249.

“I think he could even become a better defensive rebounder,” said Gophers head coach Richard Pitino. “That’s scary because he already is a really good rebounder.”

Murphy had 300 rebounds, 218 of which were defensive boards, compared to the previous season when he totaled 249 and 162 defensive.

“When you’re a sophomore captain like he was, it means that people really respect you,” Pitino said. “They follow him … [and] most importantly he is a, ‘do as I say’ type guy which is really important.”

Murphy was one rebound shy of his 13th double-double of the season in the Gophers loss to Middle Tennessee State in the first round of the NCAA Tournament in 2017.

The team will look to move further in the tournament as they return all rotation players except one.

“[I’m] pretty motivated,” Murphy said. “We definitely want to go farther than we did last year. I think just when the expectations are so high that we [set] for ourselves… it can be hard to reach them, but I think it’s very doable.”