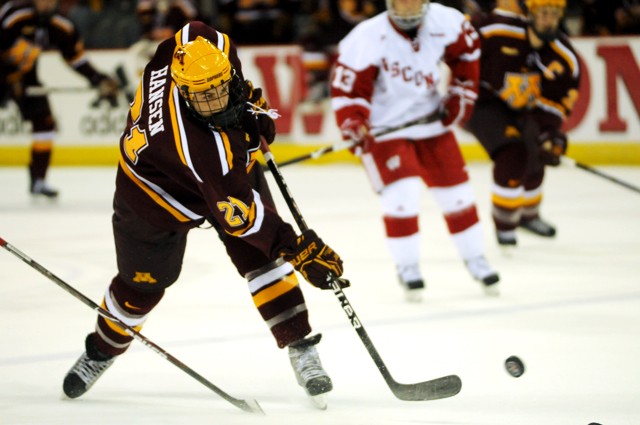 Despite coming off a two-game sweep over Alaska-Anchorage, the Minnesota menâÄôs hockey team was left trying to figure out how it would replace key players on both sides of the puck at Wisconsin for a two-game series at the Kohl Center. Freshman defenseman Nick Leddy broke his jaw during last FridayâÄôs game against the Seawolves, which will sideline him for six weeks, and senior Jay Barriball had season-ending knee surgery Friday after he was injured in practice. Without two of its top players, the Gophers were fighting from behind seconds into FridayâÄôs game in Madison. Just 24 seconds into the first period of FridayâÄôs action, Badgers senior Blake Geoffrion wound up and fired a shot from just inside the blue line that sneaked past the defense and junior goalie Alex Kangas for the early 1-0 lead. Minnesota fought back, scoring a minute into the second period, when sophomore Jordan Schroeder drove down the left side and found junior Mike Hoeffel with the perfect pass, which Hoeffel put into a wide-open net to tie the game at one. As was the case all night Friday, that GophersâÄô rally was short-lived, when 43 seconds later, Wisconsin reclaimed the lead when a Cody Goloubef backhander passed Kangas from directly in front of the net. Halfway through the second period, Geoffrion added to his total, scoring his second goal of the night on a slap shot from just outside the right faceoff circle, giving the Badgers a comfortable 3-1 lead heading into the third. In the third period, the Gophers attempted a comeback, with junior Patrick White scoring on a Minnesota power play to cut the lead to one. The power-play goal was the GophersâÄô second of the year, with White scoring on both chances. Ten minutes later, Wisconsin senior Ben Street put the game on ice, scoring off a pass from Michael Davies to end the GophersâÄô comeback and give Wisconsin the 4-2 Friday night win. Minnesota head coach Don Lucia cited turnovers as the key to the opening-night loss. âÄúThe thing that hurt us more than any tonight was turning some pucks over,âÄù Lucia said. âÄúThey ended up scoring goals two, three and four directly as a result of us not making a good play with the puck.âÄù Already down two key players after the losses of Leddy and Barriball, the Gophers entered SaturdayâÄôs game with yet another key absence. Hoeffel was a last-minute scratch after he suffered an allergic reaction prior to the game, meaning Minnesota would attempt to avoid its first sweep in the Kohl Center since the 1999-2000 season without two-thirds of its preseason offensive first line. SaturdayâÄôs game turned out to be about the players in between the pipes. Both teams entered the year alternating goalies between games, and with Kangas allowing four goals Friday night, sophomore Kent Patterson was expected to get the start Saturday, as he did in two of the previous three series. He didnâÄôt, and Kangas rewarded Lucia on Saturday night with a career performance. âÄúWhen coach Lucia told me I was going to go again, I knew I had to redeem myself from last night,âÄù Kangas said. âÄúI didnâÄôt play so well, and I knew I was going to come out and have a strong effort.âÄù Staked to an early lead thanks to a Tony Lucia goal 77 seconds in, Kangas played smart all game en route to a career-best 45 saves. âÄúFirst two or three minutes, you knew he was on,âÄù Don Lucia said. âÄúUsually when a goalieâÄôs on like that, heâÄôs going to be on the rest of the night.âÄù Tony Lucia added two assists to go with the goal in SaturdayâÄôs game. Coupled with an assist Friday night, Lucia had a four-point weekend, giving him a total of nine points in the previous two series. âÄúHeâÄôs really played well this year; heâÄôs elevated his game with the ice time that heâÄôs been given,âÄù Don Lucia said. âÄúHeâÄôs had to earn everything since heâÄôs been here; offensively heâÄôs obviously chipping in a whole lot more, and we need that with this team.âÄù With a two-goal lead heading into the second, the play of the night came directly following a Badgers power play. WisconsinâÄôs Brendan Smith , who was shut down all weekend, had a wide-open breakaway following his penalty for unsportsmanlike conduct. Smith took a pass from center ice and was all alone. He fired a shot to KangasâÄô right, but the goalie made a great save to deflect the shot and preserve the lead at two. âÄúIt was just one of those things where they got the guy out at the right time, and I was able to come down and get a piece of it with my blocker,âÄù Kangas said. âÄúKept them scoreless and that was obviously big.âÄù The Gophers added goals from White and senior Brian Schack , who was making his first start of the year after missing time due to injury. Minnesota withstood a late third-period Badgers rally and took SaturdayâÄôs game 5-2, salvaging a split and leaving Wisconsin with two points. âÄúObviously itâÄôs big to beat Wisconsin anytime. ItâÄôs a big rivalry,âÄù Kangas said. âÄúYou always got to win, especially on the road you always got to try and get points, and lucky for us, we did.âÄù Hoeffel is expected to be fine in time for next weekend when the Gophers return to Mariucci Arena and face their first non-conference opponent of the year. Minnesota will play Bemidji State in a two-game series beginning Saturday at 7:30 p.m.