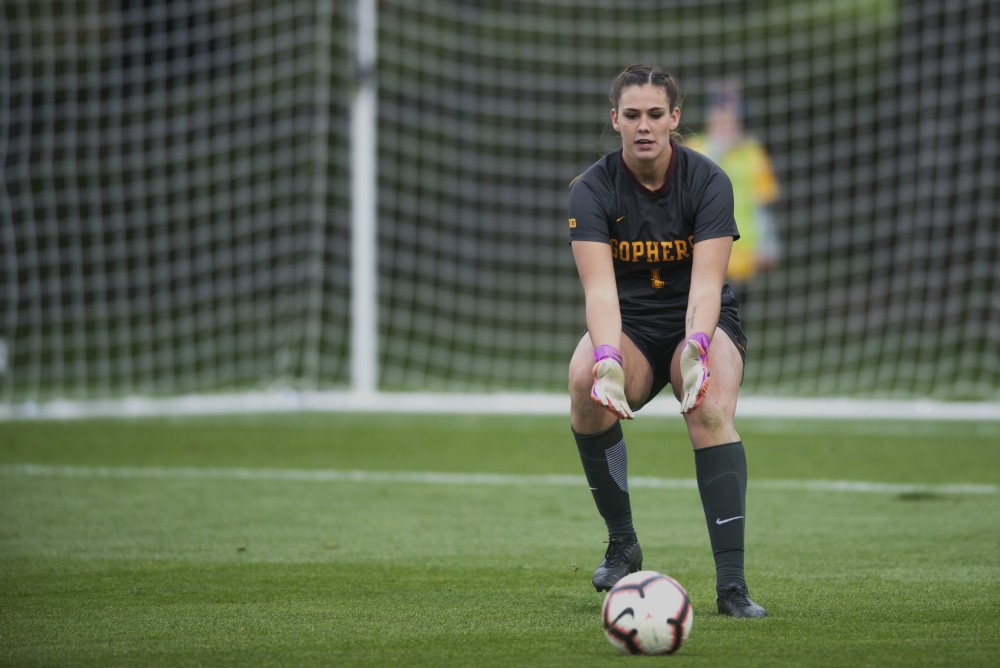 Rice scored on a counterattack, beating Minnesota goalkeeper Maddie Nielsen with a rising shot. It was Rice’s sixth goal of the season.

Head coach Stefanie Golan said she didn’t know how to react after Rice scored at first.

“All of a sudden, they were running back to midfield,” Golan said. “I was [thinking], ‘wait a second, how did that go in?’ I’ve got to watch that because my vantage point was blocked on that one.”

The goal came moments after Badgers goalkeeper Jordyn Bloomer made a leaping save on Gophers forward April Bockin. Wisconsin took possession after Minnesota couldn’t control the ball on the ensuing corner kick.

Golan said Bockin did everything she could to put the Gophers on her back.

“She was dangerous,” Golan said. “It was a great run. It was a great ball that was played to her and [Bloomer] made a fantastic save. The momentum was in our favor at that point. The second that the keeper made the save is when momentum came back the other way.”

Bockin opened the scoring in the fifth minute after receiving a cross pass from forward Patricia Ward.

Minnesota took a 1-0 lead into halftime, but Wisconsin took control of the match in the second half. Forward Dani Rhodes scored her second goal of the season in the 54th minute to even the match at 1-1.

Joy turned to sorrow for Minnesota when Rice scored the match-winning goal. Players cried after a stunning defeat to a longtime nemesis. Minnesota lost to Wisconsin twice last season: once in the regular season and once in the Big Ten quarterfinal.

“Emotions are high,” said midfielder Molly Fiedler. “We had great attitudes. It’s tough to end up with this result.”

Midfielder Megan Gray said Minnesota can’t dwell on this result for too long with two more matches remain on the regular season schedule.

“You have to take it personally, but you can’t let it affect [the next match],” Gray said. “The past is in the past, and we have to take this one and motivate us for the next one.”

Minnesota’s next match will be against Iowa on Thursday at Elizabeth Lyle Robbie Stadium. It will be the last regular-season home match for the Gophers. The match starts at 7 p.m.

Golan said the Gophers must win against Iowa (7-6-2, 3-4-1) in order to keep their Big Ten tournament dreams alive.

“We’re in a position right now where getting a win on Thursday is absolutely vital,” Golan said. “Were sitting in sixth right now. A win next weekend puts us in a good position to continue to play after our match against Penn State next Sunday.”