The market is one of many opening in the surrounding area. 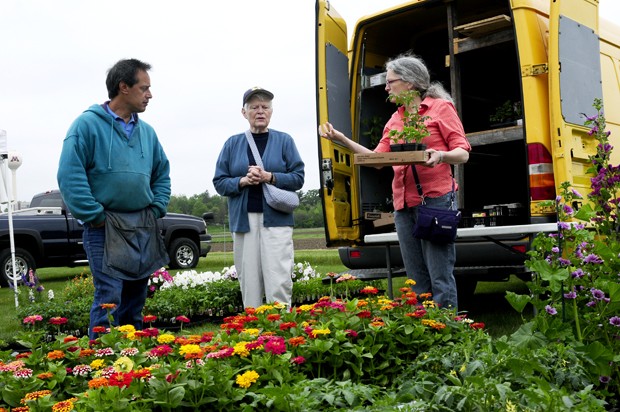 Farmers market vendor Peter Hughes, left, talks with customers Marjo Cavanaugh, middle, and her daughter, Peg Cavanaugh, right, at the farmers market in St. Paul on Tuesday. The farmers market opened on May 19 on the University of Minnesota St. Paul campus after moving from its former location across the street in Falcon Heights.

Access to homegrown foods has arrived on the University of MinnesotaâÄôs St. Paul campus. On May 19, a farmers market opened there after it moved from its previous location across the street in Falcon Heights. âÄú[The farmers market] gives us more exposure to show people things that are made at the âÄòU,âÄôâÄù vendor Jodi Nelson said. Nelson and food science senior Abigail Lundquist sell cheese at the market from the Food Science and Nutrition Dairy Salesroom . âÄúItâÄôs nice because weâÄôre essentially right on campus,âÄù Lundquist said. âÄúWe can always just tell people if they want to see more stuff or buy other products that we arenâÄôt able to bring here, itâÄôll probably boost our sales for tomorrow.âÄù The farmers market, located on Gortner Avenue, off of Larpenteur Avenue, is open every Tuesday, from 8 a.m. to noon. It will be open until late October, with the exception of Sept. 1 . Many vendors at the farmers market came from the previous location in Falcon Heights on Larpenteur Avenue behind the SPIRE Federal Credit Union, where it was located for five years. Peter Hughes , a vendor, said he likes the new location. âÄúBeing here is real nice,âÄù he said. âÄúI like it, the view is nice, I like the layout.âÄù Gloria Gebhard , a Maplewood native and University alum, said she likes the convenience of the market. âÄúI needed a place that was available on Tuesday because on Monday, Wednesday and Friday, IâÄôm busy,âÄù she said. Gebhard visits farmers markets a couple of times a year, primarily in the spring to get flowers, she said. âÄúItâÄôs beautiful, itâÄôs fresh, itâÄôs good and kind of fun,âÄù she said. âÄúThe people are interesting, the customers are interesting, and I just feel good about it.âÄù Some vendors said the atmosphere is better for both buyers and sellers. âÄúItâÄôs better for the environment because it doesnâÄôt travel as far, itâÄôs fresher, itâÄôs more nutritious, itâÄôs all around better for you,âÄù Courtney Tchida , student program coordinator of the Minnesota Institute for Sustainable Agriculture , said. âÄúI think the taste is really the most important, I think it just tastes better.âÄù Tchida created a curriculum for the first Student Organic Farm Planning class, from which came the student farm, âÄúCornercopia.âÄù Cornercopia is a class during the spring semester where students plan and plant produce in the greenhouse on a farm on Cleveland and Larpenteur Avenues. CornercopiaâÄôs interns run the farm. Products from Cornercopia will be featured at the farmers market in the first or second week of June, when the strawberries come in, Tchida said . Meredith Lovett, a vendor from Lake Elmo , Minn. found out about the St. Paul campus farmers market through a St. Paul farmers market organization. âÄúI told them what my product was and they suggested which markets would be good for me,âÄù she said. LovettâÄôs stand is called Heirloom Varieties . She describes her produce as unusual âÄî she has larger than normal cabbage and she said her broccoli grows in spirals. âÄúI thought, being on the St. Paul campus and with the agriculture department here [and] because I do such a specialty crop, that people would come to this market because they are looking for unique items,âÄù she said. âÄúI like unique vegetables that you will not find in Home Depot or Fleet Farm .âÄù