No. 21 Gophers beat Ohio State in series, but lose final game on walk-off

The Gophers are second in the Big Ten with an 11-3 conference record after the series victory. 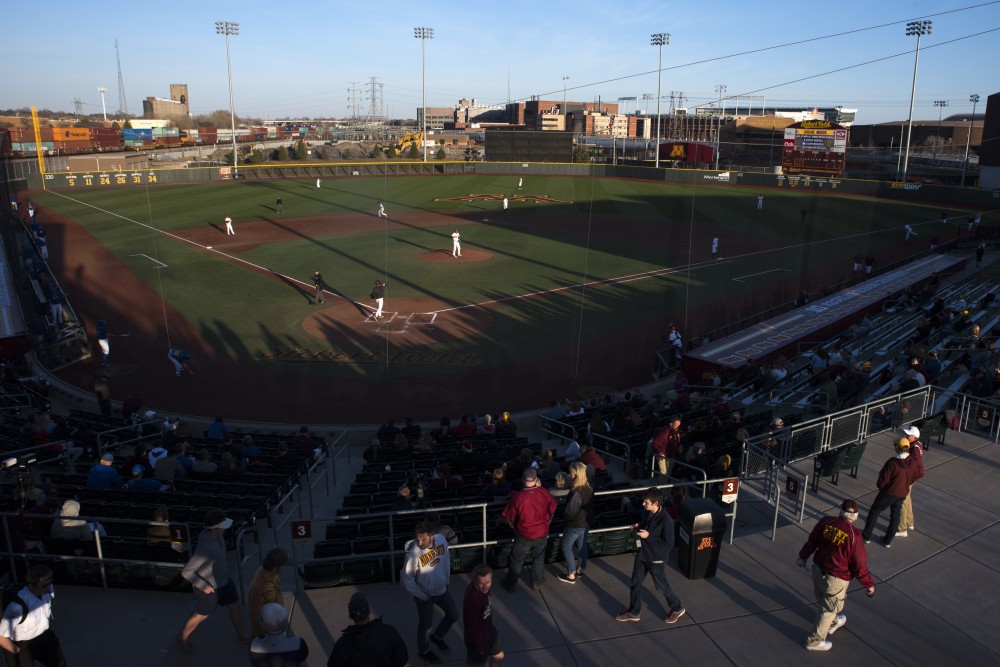 The Gophers baseball team takes the field during a game against South Dakota State at Siebert Field on Wednesday.

The Gophers have yet to lose a Big Ten series this year.

On Sunday, Minnesota notched its streak to five consecutive conference series victories, nearly finishing with a sweep over Ohio State.

“We won the series on the road and that’s hard to do in this league, and we had a chance to sweep them,” head coach John Anderson said.

Ohio State defeated Minnesota with a high-bouncing grounder with two outs and two strikes in the bottom of the ninth inning. Ohio State’s Dillon Dingler laid hit the grounder then ran to first. Gophers catcher Eli Wilson threw to first baseman Cole McDevitt but Dingler ran into him, knocking the ball out of McDevitt’s glove and sending two home for Ohio State to seal a 6-5 win over the Gophers in walk-off fashion.

“Max Meyer’s been perfect all year long and I think eventually the baseball gods catch up to you a little bit,” Anderson said of the closer who has 11 saves on the season.

Sam Thoresen started on the mound but was pulled after the third, allowing one run on one hit. Thoresen hit two batters and walked three others.

The Gophers tied the game in the top of the third inning thanks to a single from outfielder Ben Mezzenga that scored outfielder Jordan Kozicky. Then, the Gophers scored four more runs in the fifth, highlighted by a triple from infielder Luke Pettersen that scored two.

“Big Ten baseball: it’s pretty competitive,” shortstop Terrin Vavra said. “No team’s ever going to give up, and Ohio State didn’t and they gave us our money’s worth.”

A nail-biter victory was taken by the Gophers after a pitching battle ensued between Minnesota’s Patrick Fredrickson and the Buckeyes’ Ryan Feltner. Fredrickson tossed eight innings, stuck out seven, and allowed just one run in the first. Feltner threw for seven innings and allowed one run, too.

The game-winning run came from Pettersen in the ninth inning. He had a base hit to start off the inning, then he advanced to second on a sacrifice bunt from Mezzenga. Later, Petersen stole third and then reached home on a throwing error by the catcher. Petersen’s run put the Gophers ahead 2-1. Meyer closed out the ninth inning with his 11th save of the year.

“I’m just out there trying to do whatever I can to help the team win,” Pettersen said. “So in that situation, it seemed like taking that next base would really help us, and it ended up helping us win the game.”

Minnesota thanked its hosts with a run away, 11-1 victory in the first game of the series to get momentum for the weekend. The offense was led by Kozicky and Vavra, who each had three RBIs and two hits.

“A lot of the credit goes to the guys around me,” Vavra said. “It’s a tough lineup to get through and when you have guys around you that can also do damage, you’re going to get better pitches to hit.”