Minnesota lost the second match of its weekend series in four sets to the Fighting Illini. 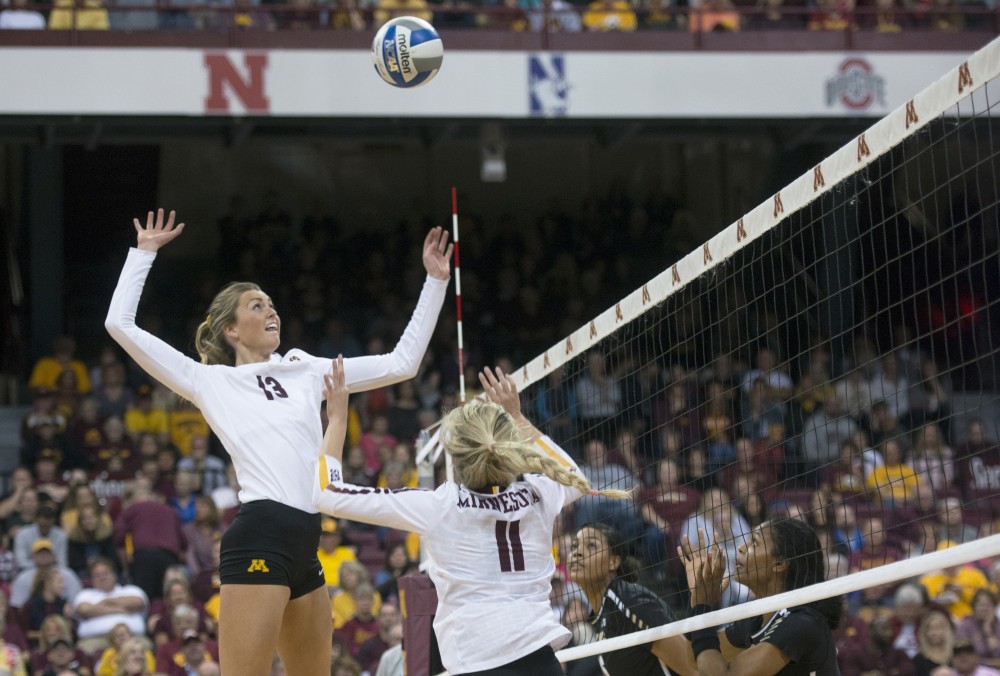 Middle blocker Molly Lohman jumps to spike the ball against Purdue on Wednesday, Oct. 11 at the Maturi Pavilion.

Coming into the weekend hot, the Gophers kept up their winning ways against Northwestern Friday.

In the second match, however, Illinois proved to the Gophers that unranked teams can still bring competition.

The Fighting Illini took the match in four sets on Saturday night in Champaign, Illinois as Minnesota finished 1-1 in its road trip. The No. 7 Gophers (25-4, 14-4 Big Ten) started off with a 3-1 win against the Wildcats in Evanston, Illinois.

“Coming in after last night’s win, we need to mentally prepare and be 100 percent focused, making sure our team is disciplined will help keep our energy alive,” said opposite hitter Stephanie Samedy.

Samedy led the Gophers with 16 kills and 15 digs. Outside hitter Alexis Hart followed with 15 kills and middle blocker Molly Lohman had 12 kills. Junior Samantha Seliger-Swenson came out with 45 assists, but Illinois’ setter, Jordyn Poulter, recorded 50 on the day. Libero Dalianliz Rosado had 13 digs and six assists.

“I think our season is going very well,” Samedy said. “We are working towards our goals all while trying to battle and learn at the same time.”

The Fighting Illini’s energy topped the Gophers. Illinois hit .333 versus Minnesota’s .190 and demolished the Gophers in kills 71-57.

After Illinois took the second set, it went on to win the third and fourth as well. The Gophers put up a good fight, though. Kills from Hart and Samedy led the Gophers early in the third but a 3-2 run put Illinois at a 2-1 lead. In the middle of the fourth, Minnesota went on a 3-0 run to get within one at 17-16. Switching rolls, Illinois ended the game on a 3-0 run and took the match 3-1.

The Gophers solidified a 3-1 win over the Wildcats on Friday night.

Samedy had a match-best 24 kills, Lohman with 13 kills and Hart added 12 more kills to the stat book.

The first two sets were neck-to-neck, with points going back and forth. The Wildcats brought their game to the third set, hitting .467 to Minnesota’s .065 and finishing the set 25-13. The Gophers won the fourth set 25-19 and came out of top at in the road environment.

“It’s important to understand that no match is given to us and we need to work for every single point,” Samedy said. “We need to stay humble and go into the match with the right mindset when playing unranked teams.”