A ban addressing the controversial practice of gay conversion therapy has passed through its first House committee. 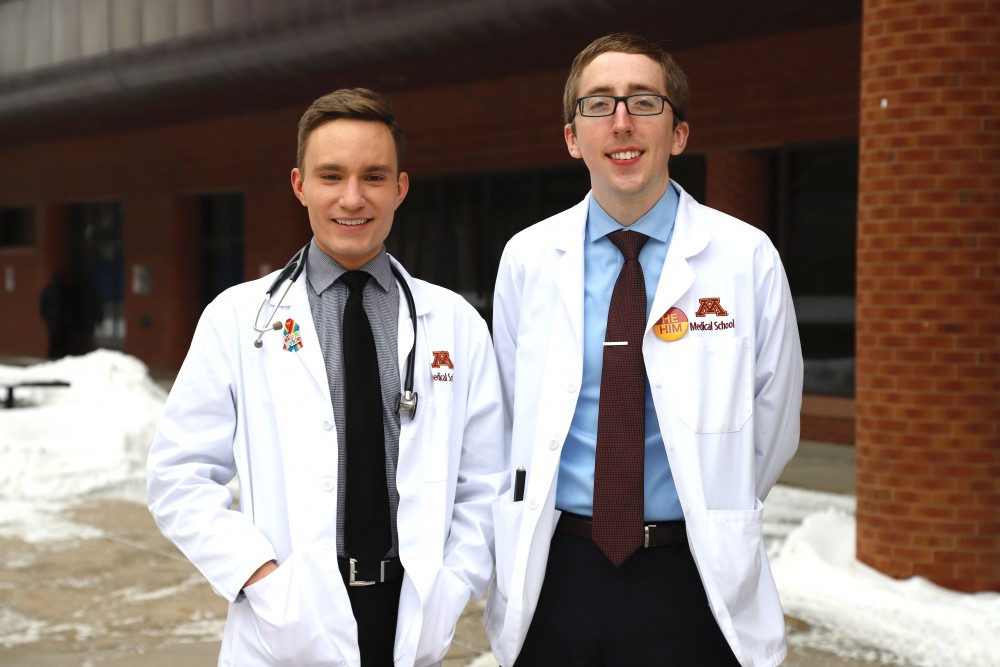 Medical students James Pathoulas and Kevin O'Donnell pose for a portrait on Feb. 22 on campus. The two are part of an effort to ban conversion therapy in Minnesota.

A statewide bill banning conversion therapy, a controversial practice aimed at changing a person’s sexual orientation, has passed its first obstacle, but debates about religious liberties and health care are only beginning to heat up.

The proposed legislation written by Rep. Hunter Cantrell, DFL-Savage, passed through the Health and Human Services Policy Committee earlier this month. It requires licensed counselors and therapists to outline that conversion therapy is deemed ineffective by major medical organizations. The ban does not apply to pastoral counseling.

Nearly all major medical organizations, including the American Academy of Pediatrics, the American Medical Association and American Psychological Association, have denounced conversion therapy, stating it is not grounded in scientific reasoning and can be detrimental to patients.

According to the Pan American Health Organization, “repression of sexual orientation has been associated with feelings of guilt and shame, depression, anxiety, and even suicide.”

“This bill is really about protecting people, especially vulnerable people from a fraudulent practice,” O’Donnell said.

Pathoulas said exact statistics about the use of conversion therapy in Minnesota are unavailable because of “coded language,” such as “restorative therapy” or “religious counseling.” A 2018 University of California-Los Angeles’ Williams Institute study estimated 689,000 LGBTQ adults have received conversion therapy nationally, and an estimated 57,000 LGBTQ individuals will receive conversion therapy before the age of 18.

One of the most adamant supporters of this legislation has been OutFront Minnesota, an LGBTQ advocacy organization. Emma McBride, who works in policy and legislative affairs with the organization, said the bill does not infringe on religious freedoms.

“The second part of the bill actually says you can’t falsely advertise goods or services. We already have that law written for a good reason — to protect consumers and vulnerable Minnesotans — and we’re just saying that that needs to apply to conversion therapy as well,” McBride said.

“I’ve met and spoken with people who have gone through transformative and compassionate sexual orientation change efforts. Their stories were really moving,” said Moses Bratrud, communications director for the Minnesota Family Council. “They don’t want the state of Minnesota to take away their choice, and it was their choice to get that counseling. We don’t want some Minnesota families to be able to get the care they want and others not to.”

He said the proposed legislation would infringe on the rights of those “who may desire to seek counseling to bring their sexual orientation or gender identity inline with their deeply held religious beliefs.”

McBride disagrees, saying the ban is aimed at protecting children and other vulnerable populations. Consenting adults would be able to address their sexuality as they see fit.

“This ban is long overdue, … what we’re talking about is manipulating, harmful therapies that tell LGBTQ people that they need to be cured in order to be loved,” McBride said.

The next step for the ban is going through the House Commerce Committee. OutFront Minnesota and other proponents of this bill are confident it will pass through the House, but they are more leery of the Republican-controlled Senate. If passed, Minnesota would become the 16th state to ban conversion therapy for minors.

According to Pathoulas, if the ban does not pass the state legislature, advocacy organizations and individuals will look to pass local ordinances banning conversion therapy and continue pushing for a ban at the state level.

“The whole point of this bill was to spark a conversation about what kind of state we want to live in, how this state is going to treat vulnerable youth, especially LGBT youth,” Pathoulas said. “The policies in this state we pass and choose to enact [create] a climate that truly impacts people’s lives.”

Clarification: A previous version of this article mischaracterized Bratrud’s description of conversion therapy.