Greeks fill up leadership roles at U

Members say networking and exposure are key to getting involved. 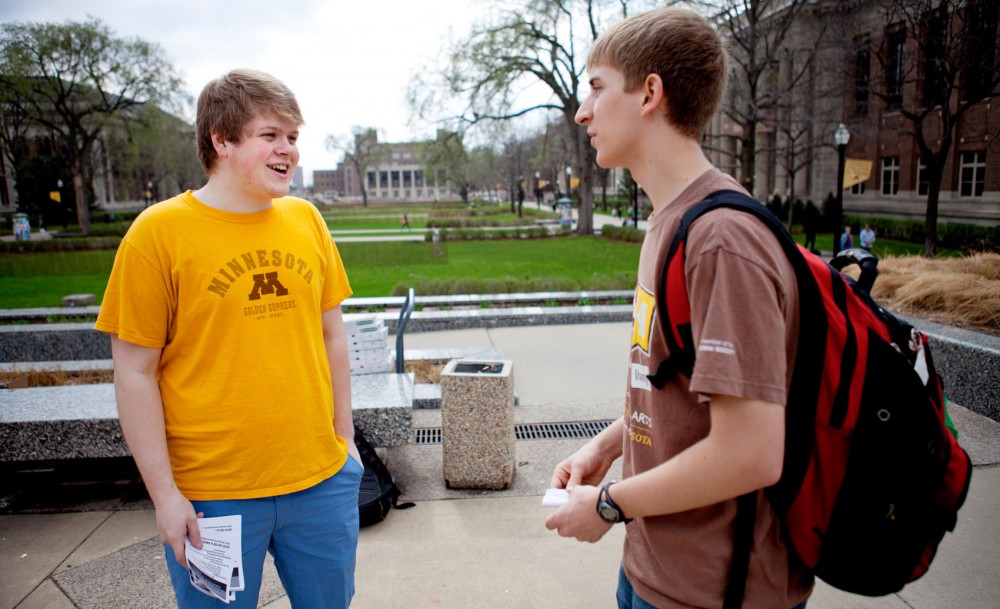 When it comes to leadership at the University of Minnesota, greeks are the first to get involved.

Though they make up just 6 percent of the University’s student community, fraternity and sorority members are some of the most active participants in student government and campus leadership groups.

“They are overrepresented in a positive way,” said Jerry Rinehart, vice provost for student affairs. “When announcements for Welcome Week and orientation leaders go out, there is a tremendous response from the greek community,” he said.

In the upcoming election for the Minnesota Student Association president and vice president, for example, all candidates are greek members. Sophomore Colter Heirigs and junior Taylor Williams are members of the Sigma Chi fraternity, while junior Angela Ugorets and freshman Jilian Koski are members of the Alpha Omicron Pi sorority.

In addition, six of the 28 orientation leaders in charge of freshmen and transfer student orientation this year, along with a “significant number” of the 400-500 Welcome Week leaders, will be greek members, said Beth Lingren Clark, director of Orientation and First-Year Programs.

“Remembering that we are only 6 [percent] of the population, that is a really impressive statistic,” she said.

There is an expectation for greek members to be involved, said Matt Levine, program director for the Office for Fraternity and Sorority Life.

“The greek community expects its members to put something into their time here,” he said.

The Sigma Phi Epsilon fraternity currently has over 90 [percent] of its members participating in activities outside of the fraternity, said Spencer Olson, chapter president, in an email.

“Participation outside the fraternity only adds to our organization,” he said.

“Other students are not fully aware about student government,” he said.

Williams said being a greek member has the advantage of using other members to become more involved and learn about the campus.

For Koski, her sorority connections exposed her to opportunities like MSA, while Heirigs said being part of the greek community “is like having a built-in network.”

Rinehart wishes more students had an inclination to be involved.

“Students who go to class and then go home are getting so little out of the University experience –– they’re not getting their money’s worth,” Rinehart said. “Those who get engaged see that their investment has a payoff.”

He said taking advantage of opportunities the University provides can help students develop skills and experiences that help clarify their interests.

“Students somehow engaged with the campus in a meaningful way have more success both here and afterwards,” he said.

Sophomore Kelly Brickl said she doesn’t mind greek members as student leaders because they are already a diverse group.

“It’s OK to have greek members holding positions as long as any fraternity and sorority associations do not interfere with the perspective of the student bloc,” Menigo said.