Riverside Plaza to be renovated

The Cedar-Riverside area apartment complex is known as a Minneapolis landmark. 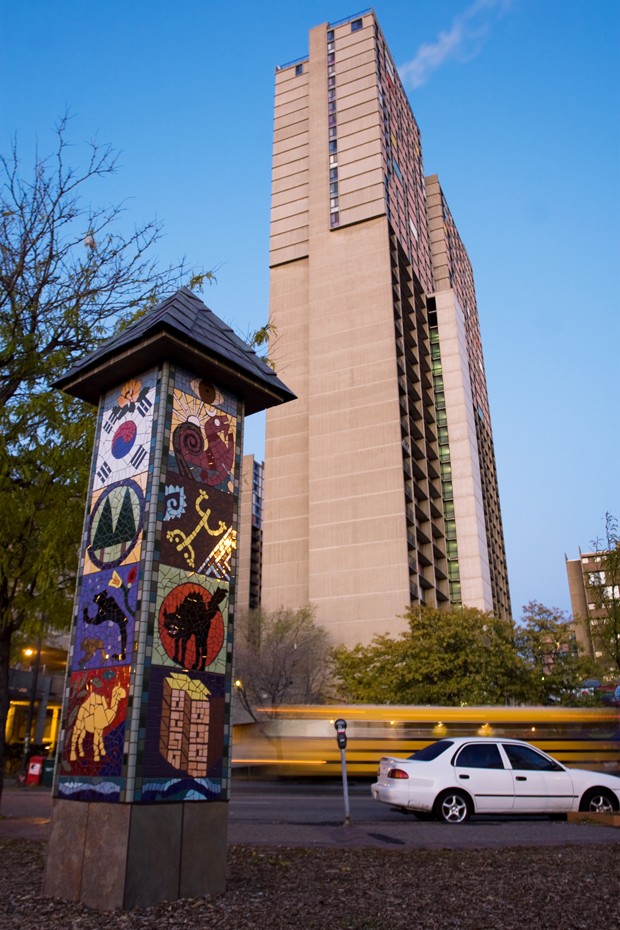 Riverside Plaza will undergo major renovations this fall to improve energy efficiency. The rehab will include the replacement of roofs, windows and patio doors as well as an overhaul of the buildingsâÄô mechanical and electrical systems. The apartment complex, located in the Cedar-Riverside neighborhood, is known as a Minneapolis landmark and is marked by unique colored panels on its exterior faÃ§ade. The complex opened in 1973 and was designed by Ralph Rapson, a renowned architect and head of the University of Minnesota School of Architecture from 1954 to 1984. Fredda Scobey, executive director of the Riverside Plaza Tenants Association, said about 60 to 70 percent of the plazaâÄôs residents are Somali immigrants, with a noticeable population of Ethiopian and Vietnamese immigrants as well. University students also live in the complex, located a few blocks away from the UniversityâÄôs West Bank campus. Roughly half the plazaâÄôs units are reserved for subsidized housing. Elizabeth Flannery, vice president of development at Sherman Associates, which owns and manages the property, said existing water pipes throughout the complex are failing and will be replaced during the rehab. She added that the complexâÄôs original 37-year-old mechanical and electrical systems could generate dramatic savings once they are reworked. âÄúWeâÄôre looking at it as a huge opportunity to make some significant upgrades and really try to realize some energy efficiencies and savings on the property,âÄù Flannery said. The total development cost will be about $90 million âÄî a significant portion of which will be used to refinance the existing mortgage on the property, Flannery said. Flannery said the plazaâÄôs owners want to preserve its 1,303 apartment units because it would be nearly impossible to replace them for the same price. Representatives from Sherman Associates have also met with residents of the building to gain their feedback. âÄúWe know this is going to be an inconvenience to residents because itâÄôs going to be a lot of construction and rehab while the units are occupied,âÄù Flannery said. Scobey said the planned repairs will be beneficial to the plazaâÄôs residents and owners, since the buildingsâÄô heating and cooling systems have caused problems with controlling the temperature throughout the complex. She said the main problem is the energy waste generated by the systems. âÄúItâÄôs more a horrible expense to the owners of the building, I believe, than actually a problem to tenants,âÄù Scobey said. Many residents are looking forward to the upgrades, including the replacement of old laundry machines, Scobey said. Flannery said developers are also exploring ways to improve the buildingâÄôs faÃ§ade, which may include work on the buildingsâÄô signature colored panels. âÄúTheyâÄôre so faded that a lot of people think it would look better to have them spiffed up,âÄù Scobey said.