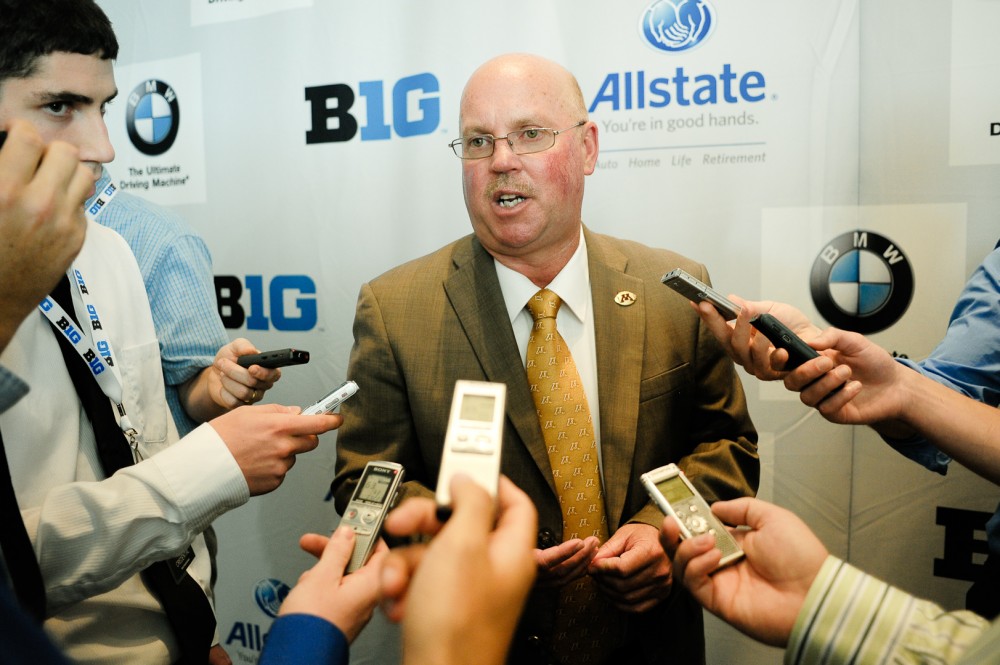 Luke Fickell stepped up to the podium at his first Big Ten football media conference and promptly announced how honored and grateful he was to represent Ohio State University before delving into the unique circumstances that confronted him and his program.

While Fickell may have the highest-pressure job in the conference, heâÄôs not the only coach that will be new to a Big Ten Program.

Five new head football coaches have joined the Big Ten for the 2011 season, each with a set of challenges facing their program. None, however, have a challenge quite like FickellâÄôs.

Former Ohio State coach Jim Tressel resigned at the end of May while he was the subject of an NCAA investigation involving Ohio State players distributing memorabilia.

Fickell, who was named head coach just days after TresselâÄôs resignation said he had no idea how to react to everything that happened.

âÄúEverything happened pretty fast,âÄù Fickell said. âÄúThe greatest thing I guess I could say is I had no time to sit and think. I had no time to feel sorry of any sort, to have a whole lot of emotion.âÄù

Fickell will have to deal with the loss of starting quarterback Terrelle Pryor, who elected to leave Ohio State, and the five-game suspensions of four other starters from the team.

The Wolverines on the other hand, can seemingly only improve under new head coach Brady Hoke.

Hoke, formerly of San Diego State, took over a Michigan program that underachieved on the field and had its own off-the-field issues under former head coach Rich Rodriguez.

âÄúOur players at this point have done a nice job handling the transition of a new staff, new system on defense, new system on offense, and how they’re being coached, what they’re being asked to do,âÄù Hoke said in his opening statement.  âÄúWe are a long way from where we need to be.âÄù

Having a player as dynamic as Denard Robinson certainly helps. Robinson was the Big Ten Offensive Player of the Year a year ago, and is the preseason favorite to win the award in 2011.

Whether Michigan will be successful will largely hinge upon whether Robinson can learn and thrive in HokeâÄôs new pro-style offense, but Hoke said he is excited for the opportunity to work with his quarterback, and is confident that Robinson will still produce.

âÄúHe’s done a tremendous job [adjusting to the offense]. I can tell you, he ran the same offense in high school, which is a plus,âÄù Hoke said.

âÄúOne of the big differences is the mechanics of taking the snap from center, the footwork, the run game, the foot patterns, the play-action game. He was ahead of the curve a little bit.âÄù

The Cornhuskers have a playmaking quarterback of their own in sophomore Taylor Martinez, and head coach Bo Pelini is excited for the HuskersâÄô arrival to the Big Ten.

âÄúWe’re excited about the season…We’ve had a great off-season. We’ve needed it. We required a lot of work because of obviously our first year coming into the Big Ten,âÄù Pelini said.

âÄúWe basically had 11 new opponents on our schedule which creates a little bit of a challenge for our football team and our kids.âÄù

Though Pelini is new to coaching in the conference, he is not new to Big Ten culture or Nebraska.

The former Ohio State safety has helped the Huskers return to national prominence, compiling a 29-12 record in three seasons as Nebraska head coach.

Although Big Ten writers picked the Huskers to meet Wisconsin in the conference championship game, Pelini said heâÄôs going to worry about the difficult regular season schedule first and foremost.

âÄúWe have a tough schedule ahead of us. But you go week by week. We always talk about, in our program, the process,âÄù he said. âÄúIf we continue to do that, we get better as a football team week in and week out, day to day, we’ll be just fine.âÄù

New Gophers head coach Jerry Kill and his long-time coaching staff share that philosophy.  Kill said his familiarity with his staff has helped him adjust in his transition from Northern Illinois to Minnesota.

âÄúI think when you take a new job over and you’re going into a new place, having people that are familiar with what you’re doing, it helps us get maybe started a little quicker,âÄù he said in his opening statement.

ItâÄôll be an uphill climb for Minnesota.  The Gophers finished 3-9 last year, and were picked by the Big Ten writers to finish last in the conference again, but Kill said he isnâÄôt concerned with predictions.

âÄúAt the end of the day you can get into predictions, things of that nature, where you’re at, so forth, but there’s a lot of things you can’t control in the game of football,âÄù he said.

âÄúNone of us know who is going to stay healthy, who has the depth, injuries and et cetera. We look forward to the challenge. We know we have one ahead of us. I think our kids are looking forward to it.âÄù

Kevin Wilson, who was an assistant at Oklahoma before taking over at Indiana, is also looking forward to changing of his new school.

âÄúTo me it’s all about the future moving forward and it starts with me. I have no issues in complaining or what should have been done or why things have happened in the past,âÄù Wilson said.

While there were quite a bit of new faces at day one of the Big Ten football media conference, a familiar old one returned for another year âÄî Penn State coach Joe Paterno. As usual he put a smile on the faces of a room full of reporters.

As he made a brief opening statement, he offered the floor up for questions but told reporters they had to âÄúspeak upâÄù if they wanted him to hear them.

When a reporter asked Paterno a question regarding his contract, the coachâÄôs response generated some laughs

âÄúWell, I feel great. I really do. Is this the last year of my contract?âÄù he said. âÄúI don’t even know I got a contract. I don’t pay attention to that.âÄù