Minnesota has a bye in the first round of the Big Ten tournament. 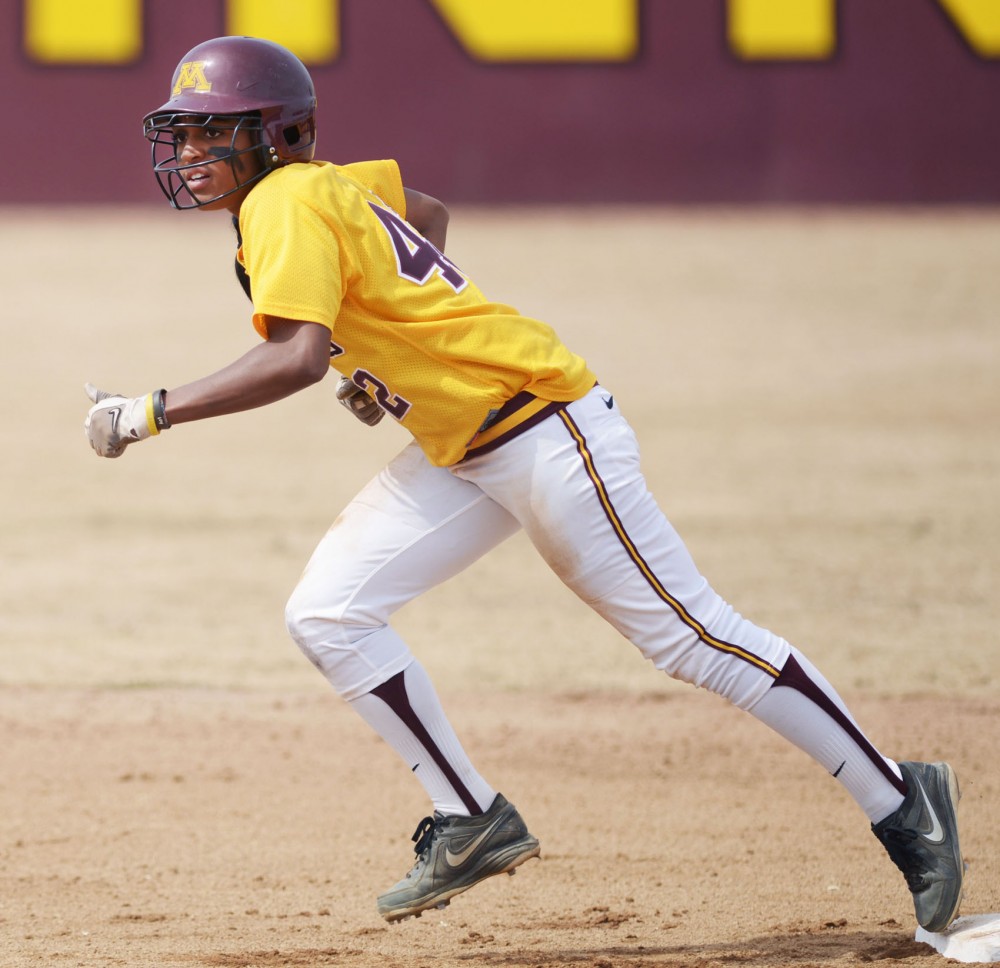 Minnesota infielder Tyler Walker attempts to steal a base against Wisconsin on April 7, 2013, at Jane Sage Cowles Stadium.

No. 14 Minnesota beat Purdue twice over the weekend to finish its regular season with single-digit losses for the first time since 1979.

It wasn’t all good news for the Gophers, though, as they were shut out for the first time all year in the series opener. Minnesota rebounded after the loss to take the final two games of the three-game set.

Gophers head coach Jessica Allister said she was satisfied with her team’s resiliency against the Boilermakers.

“I’m proud of our team for bouncing back,” she said. “That first game was a tough loss, but they showed toughness in coming back and pulling out the series.”

They continued their dominant season by giving up just five earned runs in the weekend’s three games.

Moulton earned two wins this weekend, striking out eight batters in nine innings pitched. Groenewegen picked up the loss in the first game after two of the Boilermakers’ four hits went for home runs.

Groenewegen looked excellent the rest of the weekend, striking out 21 batters in nine innings pitched, including seven in three innings of relief work Sunday afternoon. She said she was disappointed about the loss but emphasized that she’s excited about moving forward into the postseason.

“I’m excited about the Big Ten tournament. … This is the best time of the year,” Groenewegen said.

Minnesota sophomore catcher Taylor LeMay, who went 5-for-9 with four RBIs, led the team offensively during the series. Her teammate, junior infielder Tyler Walker, added to the offensive production with four RBIs of her own.

LeMay said she feels like the team is playing in postseason form right now.

“We showed a lot of character this weekend as a team, and I feel like we’re already playing with that postseason mindset,” LeMay said. She said the team will be more than ready for the Big Ten tournament next weekend.

That postseason mindset should fare well for the Gophers, who finished their regular season with a 38-9 record — one of the best marks in program history.

While the Friday loss knocked the team out of contention for the regular season Big Ten crown — dropping it to third place in the conference — the Gophers still enter next weekend’s Big Ten tournament with high expectations.

Gophers junior infielder Kaitlyn Richardson said despite likely entering the tournament as a No. 3 seed, she’s confident the team will make a deep run.

“It’ll be a tough tournament, but we’ll be back in that championship game again this year,” she said, referring to last year’s Big Ten championship game loss to Wisconsin. “And this time, it’ll have a different outcome.”