Micheletti’s U legacy lives on

Pat Micheletti was one of 13 former athletes chosen to join the “M” Club. 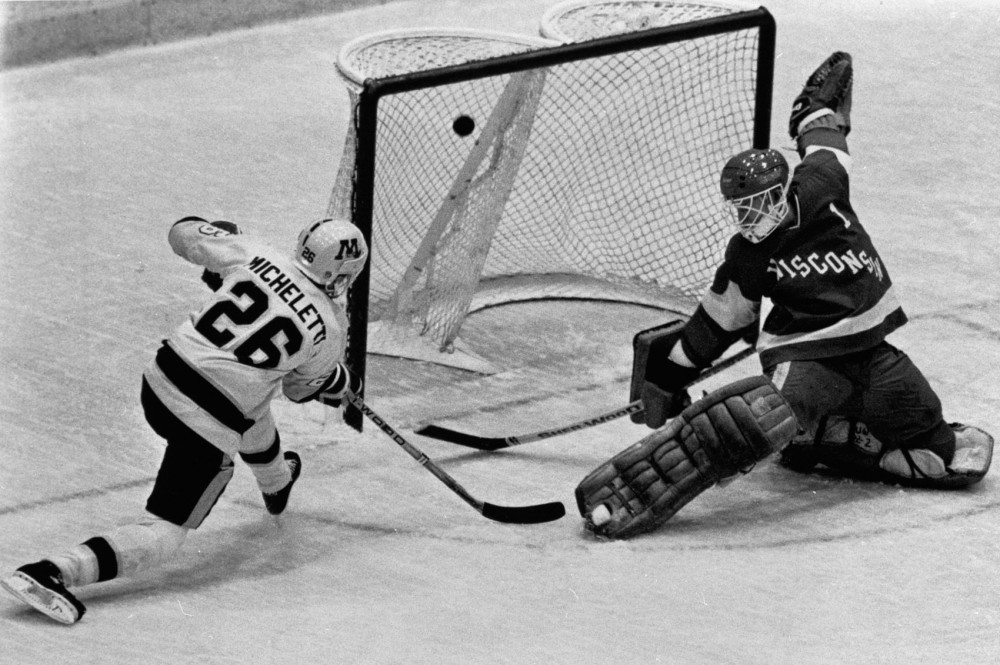 Pat Micheletti scores a goal against Wisconsin. Micheletti will be inducted into the "M" Club Hall of Fame in October.

From that year on, Pat Micheletti and his family would often hop in their car and journey over 200 miles from Hibbing, Minn., to Williams Arena to spend weekends cheering on the Gophers.

And 40 years later, Micheletti is set to head to TCF Bank Stadium this fall for his induction into the “M” Club, the Gophers’ Hall of Fame.

Micheletti was one of 13 former Gophers athletes in this year’s “M” Club class, which was announced earlier this month.

“It’s very much appreciated,” Micheletti said. “Everyone dreams, and you never know what things will actually occur.”

“M” Club Director George Adzick said the board of directors applies the same formula to every sport when evaluating possible members.

“That criteria includes the impact you had on your program, and Pat had a significant impact on the men’s hockey program,” Adzick.

On Oct. 9, the “M” Club will enshrine Micheletti for being both an exquisite marksman and an unselfish puck-handler during his four-year Minnesota career, which spanned from 1982 to 1986. He ranks second all-time in career goals and points and third all-time in assists for the Gophers.

Following college, Micheletti had a brief stint in the NHL with the Minnesota North Stars.

Micheletti’s daughter, Lindsey Micheletti, said her father was noticeably humbled by the moment and grateful for the recognition.

“When I first found out, I was extremely proud and happy for him. He is so passionate about hockey, but especially Gophers hockey,” she said.

Pat Micheletti followed two of his older brothers to Minnesota, and watching them in a Gophers uniform was integral in making him want to do the same.

“I was enthralled in the program. I was recruited by most teams in the country, [and] a lot of them shied away because they knew I was probably going to end up at Minnesota because of my brothers,” he said.

Micheletti’s childhood friend and Minnesota teammate Mike Guentzel said the stories of Pat Micheletti growing up around Gophers hockey are well known within the Hibbing community.

“[He sat] in the stands as a youngster watching his brothers play and idolizing them … probably getting pat on the back and rubbed on the top of the head by Herbie Brooks at the time, which … probably made a huge impression on a young guy like that,” said Guentzel, who is currently Minnesota’s associate head coach.

In his late teens, Micheletti departed the stands and set out to accomplish a wide array of feats at Minnesota.

He led the Gophers with 48 goals in the 1984-85 season, a total that has stood the test of time. In nearly three decades, not a single player has come within seven goals of that mark for a single season.

“It wasn’t like [Micheletti] had a cannon or even a dart,” Guentzel said. “The puck would drop 6 inches, or it would knuckle sideways and go between the goalie’s legs. I mean, it was remarkable, and sometimes you would just shake your head and go, ‘How did that go in?’”

Micheletti said he became a goal scorer by putting in the time to develop the skill before practice when many were just beginning to strap on the pads.

“I worked on my shot … a half hour before anyone got on the ice for practice,” he said.

“[Pat] accomplished just about everything a hockey player can at the University of Minnesota,” he said. “He had an extraordinary career for the Gophers, and he is very deserving of inclusion in the ‘M’ Club Hall of Fame.”

In addition to high scoring and assist marks, Micheletti was a first team All-American during his time at Minnesota. Soon, he’ll be honored for his accomplishments.

“He’s one of the greatest players in the history of Gopher men’s hockey,” Adzick said.