Minnesota won five straight matches to start the season and will head into the week with momentum. 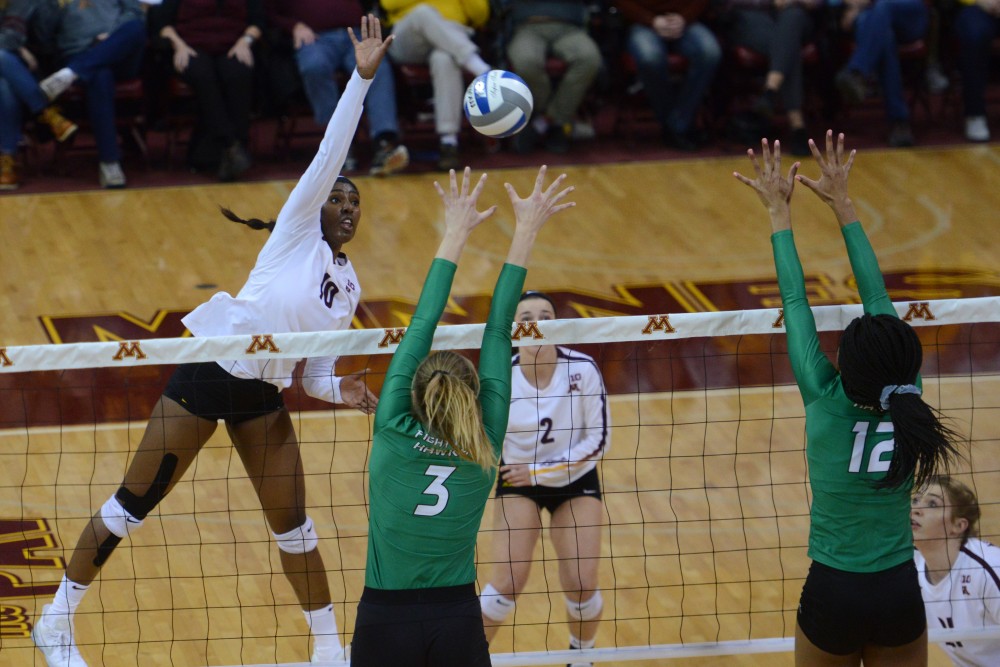 Freshman opposite Stephanie Samedy reaches to block the Fighting Hawks at Maturi Pavilion on Friday, Dec. 1.

While the temperature outside is starting to fall, the Gophers volleyball team is heating up.

“We’re a team to watch out for and we’re getting better every day,” sophomore Jasmyn Martin said.

On Friday, the Gophers returned to Maturi Pavilion for the first time this season to kick off the Diet Coke Classic.

North Dakota State (1-5), Georgia Southern (1-5) and Arkansas (3-2) played in the tournament alongside the Gophers.

Minnesota began its weekend Friday night against NDSU, where the Gophers swept the Bison 3-0.

The Gophers players were dominant and fed off the Pavilion’s atmosphere, which echoed with the constant yelling of “point U.”

“We were in control of our game and we didn’t make a lot of errors,” senior Samantha Seliger-Swenson said.

Sophomore Stephanie Samedy led the team in points with 13.5. She tallied 11 kills and five digs, which she credited to her mental game.

“I think it was my mindset to do whatever I needed to do for the team [and] make smart decisions when I needed to,” Samedy said.

On Saturday, the Gophers played two games – an uncommon event in volleyball.

“[It is] a weird day; we don’t play too many double headers,” head coach Hugh McCutcheon said.

The Gophers faced off against the Georgia Southern Eagles on Saturday morning and swept them in three sets, with final scores of 25-13, 25-13 and 25-10.

“I thought we had a really strong performance this morning,” McCutcheon said.

The Gophers rallied behind a defense that tallied 12 blocks. Eight of these were made by sophomore Regan Pittman, who said she’s worked on that aspect of her game.

“I’ve been really focusing on my blocking,” Pittman said. “I still have a lot of work to do, but I’m getting there day-by-day.”

The final game for the Gophers was against Arkansas in the steamy Pavilion, but that didn’t affect the electric crowd or Minnesota. Like the first two games of the tournament, the Gophers swept the Razorbacks 3-0. The scores were 25-15, 25-19 and 25-18.

Freshman Adanna Rollins, along with Seliger-Swenson and Pittman, were named to the all-tournament team. Pittman was also named tournament MVP.

“It feels good to be MVP, but I wouldn’t have done it without my teammates,” Pittman said.

The season began with the Big Ten/ACC Challenge on Aug. 24 at the Target Center, this year’s host of the final four.

“I think everyone after playing in there was like, dang, we need to do everything we can do to get back [in the tournament],” Martin said.

The second matchup was against North Carolina (2-3).

The Gophers answered in the fourth set and finished off the Tar Heels 25-23. Pittman led the team with 21 points.

“When we weren’t playing particularly well, we still found a way to win,” McCutcheon said.

No. 3 Minnesota will travel to California to compete in the Big Ten/Pac-12 Challenge where they will play against Oregon and No. 1 Stanford on Sept. 7 and 8.