Michael Handel is on the baseball team, and his dad works in the athletics dept. 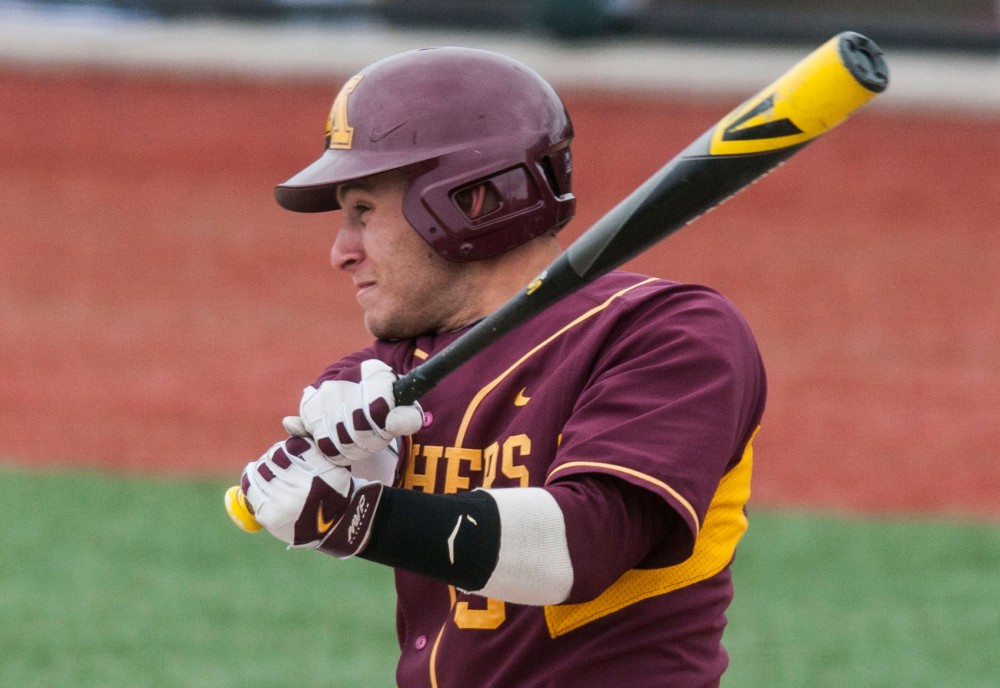 Gophers shortstop Michael Handel hits the ball during a game against Nebraska on Feb. 13, 2014 at Siebert Field.

Michael Handel grew up in Sun Prairie, Wis., 30 minutes from the University of Wisconsin-Madison.

He was raised a Badgers fan, and his father, Randy, even worked in the university’s athletics department.

But the Badgers haven’t had a varsity baseball team since 1991, so Handel was forced to alter his allegiance to continue playing baseball.

Just before his senior year of high school, Handel committed to the University of Minnesota to play baseball. And during the summer before his first semester of college, he learned his dad and family would be moving with him, as Randy was hired as Minnesota’s associate athletic director for development.

While they perform in different capacities for the Gophers, the Handel family’s impact on Gophers athletics is apparent.

For Michael, the opportunity to play close to home has been increasingly rewarding since he stepped foot on campus in 2010.

“One of the biggest things that was important for me was taking location into account because I wanted my parents to be able to come watch me play,” he said. “They’re huge supporters and fans, and it always means a lot when they’re at the games.”

When the opportunity arose for the elder Handel to join, Randy checked with his son to ensure it would be OK for him to work at Minnesota while Michael attended the University.

Michael had no problem with it.

“I couldn’t imagine going through college without my parents being so close to me,” he said. “Just even being able to go home Sunday for dinner or something like that … I’m really grateful for choosing Minnesota.”

Randy, who also serves as an adjunct professor in the sport management department, said he enjoys the proximity to his son, too.

“As a parent, to be able to watch your son develop lifelong friendships and play a game he loves in the Big Ten is truly a blessing,” he said.

As associate athletic director for development, Randy oversees day-to-day operations for the Golden Gopher Fund, which is responsible for the athletics department’s fundraising.

Head baseball coach John Anderson has seen the Handels’ influence firsthand — he worked alongside Randy in developing Siebert Field and coaches his son.

“[Randy has] brought a lot to the table here as far as his expertise in raising our ability to generate the funds to have a facility that allows us to play baseball in the Big Ten,” Anderson said.

Anderson said Michael, who starts at shortstop for the Gophers, is important to his team’s success, too.

“He’s a key piece in our lineup, and I think not having him on the field the last couple weeks showed we missed his leadership, his offense and his defensive skillset,” Anderson said.

Off the field, Michael studies business and marketing education with a minor in sport management.

He once took one of his dad’s classes, which proved to work out.

“In my first class with him, I didn’t really know how it was going to go,” Michael said. “But he didn’t treat me any different than other people.”

From there, he knew he had a favorite professor to check in with on campus.

“When I was living on campus, I would stop in for lunch [with him] about as often as I could,” Michael said. “If I’m heading to Bierman [Field Athletic Building] for a lift before practice, I try to find time to stop in and see how he’s doing because it’s not every day you get to see your parents when you’re in
college.”