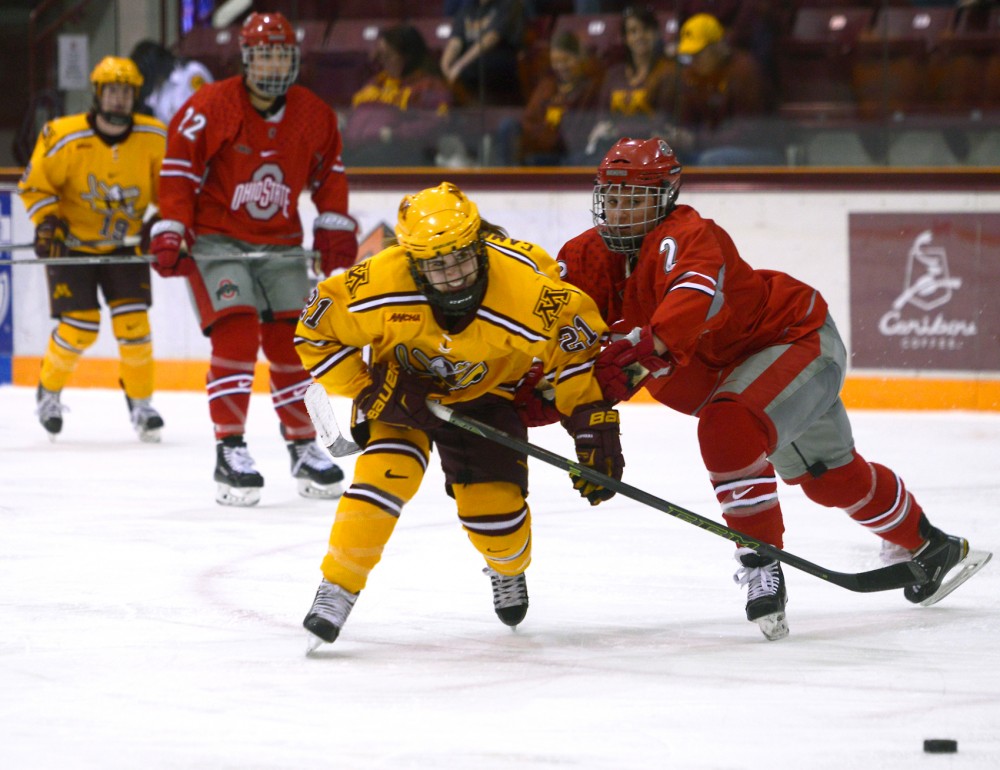 Gophers forward Dani Cameranesi battles for possession of the puck at Ridder Arena Saturday, when the Gophers defeated Ohio State 5-0. Cameranesi scored a hat trick in the victory which will advance the Gophers to next weekend's WCHA Final Face-Off.

2) for the second consecutive game Saturday 6-2, making for a sweep of the Gophers’ first weekend of play.

The Gophers unloaded on the Lions early, putting themselves on the board at the 5:32 mark in the first period. Junior forward Caitlin Reilly netted a rebound, and was assisted by sophomore forward Sarah Potomak and freshman forward Alex Woken.

Lindenwood bounced back almost immediately and knotted the score 1-1 at the 10:41 mark, the first goal Minnesota has allowed this season.

The score stayed tied through the first period, but Minnesota led in shots 9-4.

Freshman forward Lindsey Agnew scored her first collegiate goal less than two minutes into the second period off an assist from senior forward Dani Cameranesi to give Minnesota the lead and an early energy boost.

Minnesota started a 5-on-3 power play five minutes into the second period, and capitalized with a close-range goal from senior defenseman Megan Wolfe, assisted by Potomak and junior forward Kelly Pannek.

Lindenwood refused to yield and scored at the 8:33 mark, narrowing Minnesota’s lead to 3-2.

Minnesota put the final nails in the coffin with two goals in the third period from Cameranesi, and one from Woken, the first of her career.

The Gophers had a huge shot on goal advantage for the match, and outshot Lindenwood 32-10. Redshirt junior Sidney Peters and freshman Serena D’Angelo shared time in net.

Cameranesi ended the game with two goals and one assist, while Woken had a goal and an assist. Potomak and Pannek had three assists each.

Minnesota hits the road next week to open up WCHA play, playing at Bemidji State next Friday and Saturday.