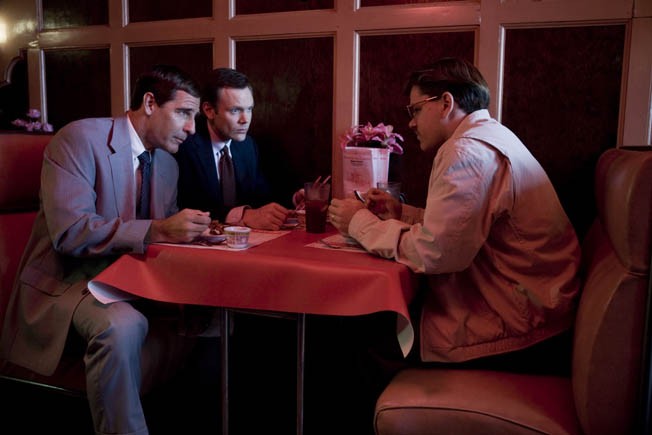 âÄúThe Informant!âÄù DIRECTED BY: Steven Soderbergh STARRING: Matt Damon, Joel McHale, Scott Bakula RATED: R SHOWING: Lagoon Theatre Cue the hazy lighting that emblemizes early âÄô90s film; enter the mustachioed and charming but spacey biochemist Mark Whitacre (Matt Damon) at work in Decatur, Ill . Steven SoderberghâÄòs âÄúThe Informant!âÄù unravels like a satirical interpretation of a John Grisham novel. The plot, based on a true story by Kurt Eichenwald , centers on WhitacreâÄôs collaboration with two FBI agents (Scott Bakula and Joel McHale of âÄúThe SoupâÄù and âÄúCommunityâÄù ) to crack an international agricultural price-fixing scandal. WhitacreâÄôs company, ADM , works in the corn product business, producing compounds and additive elements that continue to arouse suspicion in todayâÄôs glamorization of the organic and the natural. The company works specifically with lysine, a corn product that still finds its way into every form of hyper-processed food, from cocoa to popsicles. The early âÄô90s are flawlessly recreated through intricate set and costume design, with WhitacreâÄôs flimsy, flower-print ties and hung tapestries of quilted birdhouses. In the informantâÄòs office hangs a brass Illinois plaque, and enormous Abraham Lincoln busts are perched atop the bookcase. But thatâÄôs where the film becomes less apt and more drab. No matter how accurate the depiction of middle America, the rest of the aesthetic elements feel schizophrenic, lacking the coherence that makes a film seem like it was melded by an overarching creative direction. The scenes march from country to country, Paris to Japan to Britain, while the music oscillates between thick âÄúAustin PowersâÄù brass to crawling âÄúThe Talented Mr. RipleyâÄù violin solos. The filmâÄôs saving grace is WhitacreâÄôs tendency to venture into his own head. His mind takes breaks from would-be stressful connections with the FBI to ruminate on Amazon butterflies with fantastical color patterns, Michael CrichtonâÄôs âÄúRising SunâÄù or the hazards of wool sweaters. WhitacreâÄôs snappy stream of consciousness hops from one disjointed meandering to another, with lines like, âÄúI donâÄôt like wool on skin âÄ¦ not even that merino wool they have at Marshall FieldâÄôs in Chicago. My wife says itâÄôs form-fitting âÄ¦âÄù While McHale fails miserably in a foray into âÄúseriousâÄù acting, DamonâÄôs character play electrifies scene after scene in a film that is otherwise stagnant. His commitment to the idiocy of his character nudges the film slowly along its narrow tracks. During a business meeting, Whitacre wanders off and thinks, âÄúThereâÄôs a sale at BacharachâÄôs on those Oscar de la Renta ties that nobody ever buys.âÄù As much as âÄúThe Informant!âÄù capitalizes on set and costume design, clever writing and Matt DamonâÄôs perfectly manicured mustache, nothing can rescue the pseudo throwback from its mediocre plot development and an overwhelming cast of unenthusiastic actors.