Fraternity offers a taste of cultures 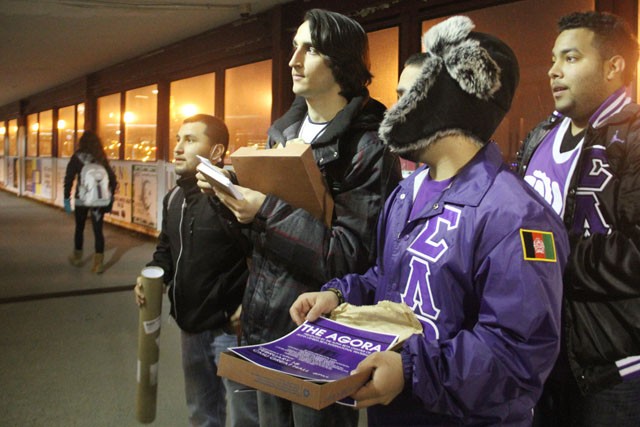 Paolo Espanola thought he would never join a fraternity. His mother hoped he never would.

“My mom nearly freaked out when she heard,” the University of Minnesota accounting junior said. “In the Philippines, where IâÄôm from, fraternities are actual gangs âÄî they actually kill people.”

Espanola said joining the UniversityâÄôs Alpha Beta chapter of the Sigma Lambda Beta fraternity has offered him an experience far more positive than what he or his mother could have expected.

Today, Espanola and the other 13 undergraduate fraternity members are wrapping up preparations for the groupâÄôs eighth annual cultural celebration âÄî “the Agora” âÄî which will take place Friday in Coffman UnionâÄôs Great Hall

Fraternity President Sherief Elabbady said fraternity members established the event to highlight the cultural diversity on campus and broaden the perspectives of those yet to explore it.

The group has carried on the tradition ever since, but itâÄôs taking a different approach this year, said Espanola, the fraternityâÄôs director of cultural awareness.

He said after attending similar events on campus he came up with a better way to do things.

Instead of performances and food, this is a “marketplace of cultures” where participants will navigate a series of booths, each showcasing aspects of a different culture represented on campus, Elabbady said.

Most of the 13 booths have been put together by student cultural groups.

One booth will be hosted by the Somali Student Association.

“The event goes in line with what we strive for as a cultural group,” Somali Student Association President Abshir Mohamud said. “Things like including other student groups, representing our culture and supporting cultural awareness.”

Groups were discouraged from simply “showing poster boards with different regions of their countries,” Espanola said.

In addition to the usual performances and food, Elabbady said there will be opportunities to learn cultural dances, get henna tattoos and play games from different regions.

“The food is what brings people in,” he said, “but we hope that the opportunity to learn allows them to leave with a better sense of culture.”

Sigma Lambda Beta, which will also be performing at “the Agora,” is expecting a crowd of about 400 people and has been planning for the event since early October.

Most fraternity members are involved in other student groups, which helped when handling the stresses of planning the event, Espanola said.

“ThatâÄôs part of what encouraged me to join,” he said. “I admired the confidence, multiculturalism and especially the motivation of the guys. For me, it wasnâÄôt just about the brotherhood.”

The group also has an array of cultures and includes Latino, Philippine, Afghani, Egyptian and Somali members.

Jamelah Hersh, president of the Middle Eastern Student Association, which will host a booth, said seeing the diversity represented by the fraternityâÄôs board sends a message.

“ThatâÄôs what they stand for,” she said, “multiculturalism.”

Elabbady, who grew up in an Egyptian household, said despite his hopes of impacting all who attend, there is one person he is most excited to see.

“My momâÄôs going to be here for the first time,” he said. “SheâÄôs very excited, so thereâÄôs a little added pressure.”

Both Elabbady and Espanola agree the main goal of the event is not to highlight differences but focus on the ideas that connect all cultures.

“I hope that people can come out and broaden their perspective of the world at least a little bit,” Elabbady said. “The more we can appreciate other cultures, the more we can be aware of ways weâÄôre always interconnected as humans.”