Dayton sworn in as Minnesota’s governor

Dayton called for collaboration with legislative Republicans, who will be hold majorities in both the House and Senate when they're sworn in Tuesday. 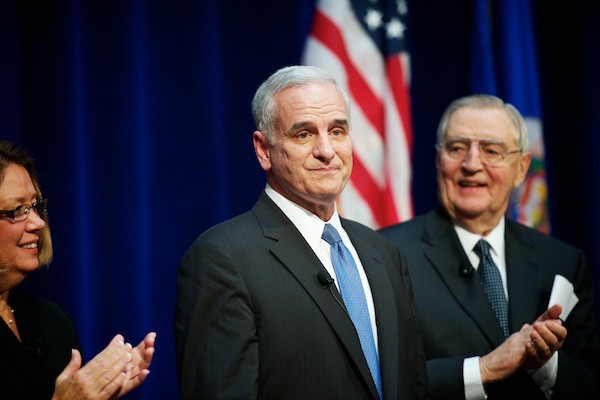 Minnesota Gov. Mark Dayton said Monday that collaboration will be a key priority in bringing jobs to the state and balancing a projected $6.2 billion budget deficit.

Dayton was inaugurated as MinnesotaâÄôs 40th Governor, and the first DFLer since 1986, on Monday in St. Paul. The inauguration marked the beginning of a tough legislative season for both parties.

The session begins Tuesday, bringing in a contingent of new Republican lawmakers and a historic Republican majority in both chambers of the Legislature. But a pervasive good mood seemed to dull looming partisan disagreements at Dayton’s swearing-in.

Though Dayton repeated, âÄúletâÄôs get Minnesota working again by working togetherâÄù in his speech, he remained on-point in his message for more progressive taxes. Dayton campaigned on a proposal to raise $1.9 billion biennially in new taxes on MinnesotaâÄôs highest earners – individuals making more than $130,000 yearly and couples earning more than $150,000 in the same period.

In the past, Senate Majority Leader Amy Koch and House Speaker Kurt Zellers have strongly opposed any tax increases, following a lead set by Pawlenty during his term.

At the inauguration Koch simply said of Dayton, âÄúThis is his day.” Though she added the state should live within its means.

In his speech, Dayton challenged those who decry new taxes to bring him a balanced budget âÄúwithout destroying our schools, hospitals and public safety.âÄù

The inauguration, held at the St. Paul Landmark Center, was officiated by former Vice President Walter Mondale and presided over by justices from the Minnesota Supreme Court. Chief Justice Lorie Skjerven Gildea swore Dayton in.