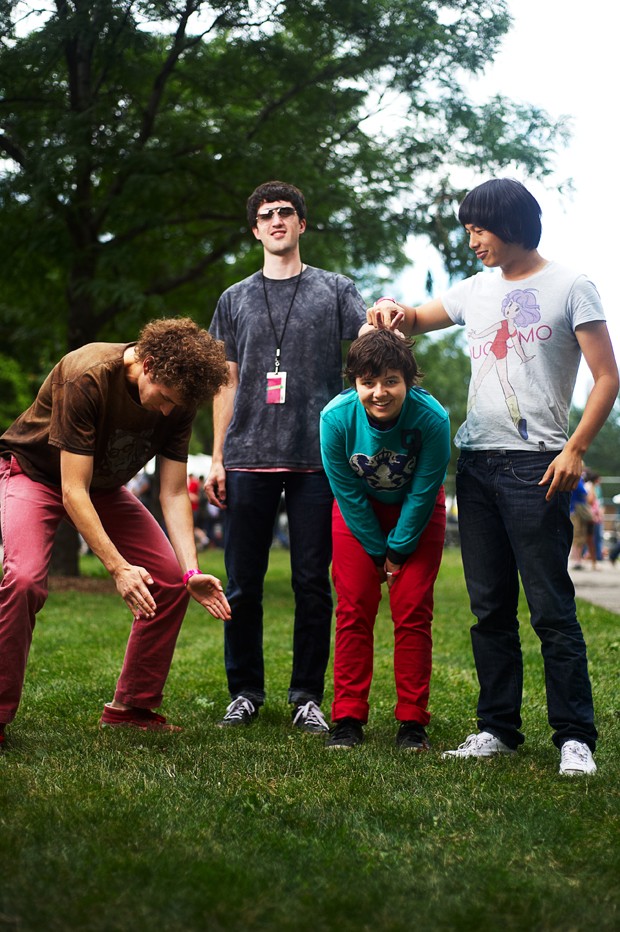 Ponytail was formed in art class. Yeah, they got an A.

Ponytail is a four-piece act from the experimental band incubator that the city of Baltimore has become. They met in an art class and found that they shared a proclivity for chaotic but structured soundscapes, complete with vocals that have been called everything from âÄúYoko Ono-likeâÄù to pre-linguistic. In person, Ponytail are a friendly group, half of them donning pink pants and the other half in blue pants. Kind and excitable, they were even polite enough to give this A&E reporter suffering from laryngitis a few tips on herbal remedies (no, that doesnâÄôt mean weed). What bands are you most excited to see? Dustin Wong (guitarist): I think LindstrÃ¸m because I donâÄôt know anything about them. Ken Seeno (guitarist): If we can see Yeasayer, theyâÄôre playing right after us. IâÄôd like to see them. Fucked Up (the band). All around: Killer Whales Seeno: We didnâÄôt even know who was playing âÄôtil we got here. You guys are from Baltimore. Are you part of the Wham City [arts collective] scene? Do you work with Dan Deacon? Wong: WeâÄôre good friends with him. WhatâÄôs the scene like? Molly Siegel (vocalist): ItâÄôs a supportive, small town. Seeno: ItâÄôs like a small âÄ¦ nebulous. I read that you guys met in a class âÄ¦ it was called âÄúparaphotographyâÄù or something. [Laughs] Wong: It was called âÄúparapainting.âÄù What is that? Can you explain? Jeremy Hyman (drummer): The main idea is that youâÄôre working with music the way you would work with painting âÄ¦ in parallel. It has nothing to do with painting, just like the methodology and the practice and the observations a painter would make. How did you apply the theory to your sound? Hyman: ThereâÄôs really no theory. It was just the fact that we all didnâÄôt know each other [the people in the class had to form bands with other class members]. Wong: Four different colors meeting. Hyman: Now weâÄôre brown. Seeno: If anything, the class is supposed to see what happens if you get an artist perspective on a new medium. We studied as fine artists starting a rock band. Do you apply painting principals to analyzing music? Like figuring out foreground /background? Wong: Sure âÄ¦ but it can be even more abstract than that. Siegel: The idea of parapainting is like, âÄúWhatâÄôs going on with these different movements in art and painting? WhatâÄôs going on parallel to that? What was the scene? âÄ¦ What was happening in culture? Now weâÄôre playing a festival, and weâÄôre in a band, but weâÄôre not doing traditional music and weâÄôre sort of using all these different ideas. Wong [sarcastic]: ItâÄôs all about departures âÄ¦ you know âÄ¦ for the sake of liberation. Changing gears, IâÄôve read a lot of reviews and they seem to concentrate on your [SiegelâÄôs] vocal stylings a lot. I was wondering, are they influenced by Xena: Warrior Princess at all? Siegel: Not directly. Subconsciously? Did you watch it as a kid? Siegel: Maybe. I watched âÄúXenaâÄù a little bit. Wong: SheâÄôs a strong woman. What about The Sims? Seeno: ThatâÄôs never come up before. Have you played The Sims? Sielgel: IâÄôve seen it. Seeno: You canâÄôt really understand it. You guys donâÄôt have a bass player. Do you feel a connection with The White Stripes because of that? Wong: IâÄôve never thought of that. Seeno: IâÄôve never connected with The White Stripes, like ever. ItâÄôs just not my band. All Around: I like them. Do you ever get asked to justify not having a bass player? Wong: TheyâÄôre fine with it. Siegler: I think itâÄôs one of the biggest complaints we get about our songs. Seeno: But weâÄôre working on that. When you write your songs, do you improvise? Wong: ItâÄôs all nuanced improvisations, little tweaks. A lot of improv bands have a bass player. Seeno: Yeah, to hold it down. Do you have a Japanese influence in your sound? Wong: I grew up in Japan, so maybe a quarter. Seeno: When we started playing, I got really into a lot of Japanese bands âÄ¦ Flower TravellinâÄô Band âÄ¦ Yellow Magic Orchestra and stuff âÄ¦ old Japanese psychedelic stuff. Then thereâÄôs the new stuff; people notice the influence, like Boredoms.