Find your way out of campus and into a colorful world of chilles and pastries that will leave you begging for mas. 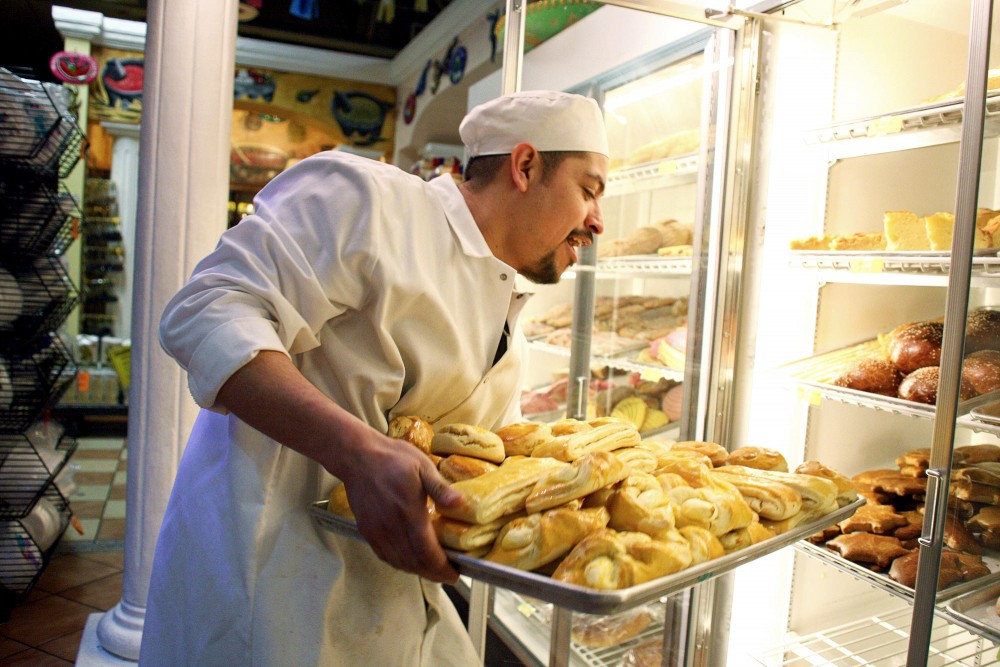 The Twin Cities have a rich cultural legÂ­acy, impor ted by successive waves of imÂ­migration. Major populaÂ­tions representing nearly ever y continent on earth (still searching for penÂ­guins and kangaroos) have settled throughout MinÂ­neapolis and St. Paul, and the character of these citÂ­ies is largely created by the cultural interactions found within. Ojibwe and DaÂ­kota peoples met with the original Anglo-European immigrants, who were folÂ­lowed by Scandinavians, African-Americans, LatiÂ­nos, Hmongs and Somalis, among many others. The beauty of an urban area is contained in its diversity and breadth of potential experience. Thus it is no wonder why the Twin CitÂ­ies shine so brightly.

College students unÂ­fortunately do not seem to take advantage of this rich tapestry nearly as much as they could. Sticking close to the University (or bar-spots), we often fail to exÂ­plore the parts of the city that are truly rich in life force. One of those parts is Lake Street between Hiawatha Avenue and UpÂ­town, a dense tapestr y of color and flavor.

A&E wandered down Lake to three dif ferent Mexican marketplaces, cornerstones of the Latino community. There we samÂ­pled and compared the two best parts of most cultures: their spice racks and their desserts.

The first of the markets walking west (toward UpÂ­town) from the University area is La Alborada, slightly hidden inside a colorful storefront. The market conÂ­tains an eatery of its own, as well as little alcoves sellÂ­ing shoes, books and other necessities of living. La AlÂ­borada is bustling, even on a cold Saturday afternoon, and its staf f are all very kind and helpful. The smell on the inside is great, and chatter fills the space with warmth. Feeling right at home, A&E went looking for the groceries.

The grocer y section of La Almorada is small but dense and ridiculousÂ­ly cheap. An entire wall sprawls with different types of dried peppers in the back, each carrying a disÂ­tinct shape, color and flavor. The spice selection, too, is outstanding âÄî by far the best of the markets âÄî with every conceivable type of herb, powder and flower. Truly drool-inducing for any fan of Mexican cuisine.

The panaderia, or bakÂ­ery, of La Alborada is nearly as enticing as the spice rack at first glance. Rows of sweet breads, or pan dulces, sit waiting to be chosen by gigantic plastic tongs. Plus, they cost only 75 cents, cheapest of all the markets. After selecting a few, howÂ­ever, it is soon obvious why they can charge so little. The panadero (flaky pasÂ­try with empanada dough on top) isnâÄôt so much flaky as crumbly, and the inside seems a three-to-one ratio of lard to sugar. The elote (named after corn, covered with square ridges) is deliÂ­cious but dense and hard to eat. The concha (seashells, fluffy bread topped with patterned sugar paste) is pleasant but missing someÂ­thing. La AlboradaâÄôs treats are good if you want a lot of ultra-sweets for cheap, but not the best quality.

Mercado Central, a few blocks west of La AlboraÂ­da, puts even the warmth of that lovely market to shame. The restaurant/ clothes/shoe/books/blanÂ­kets/trinkets emporium is filled to the brim with life of all ages, though the bustle gives the staff a rather harÂ­ried air.

CentralâÄôs groceries are the least impressive of the lot, though still fun comÂ­pared to Rainbow. A decent array of spices and chiles, slightly expensive tortillas (compared to La Alborada) and a small refrigerator unÂ­derwhelm, but the number of canned goods weâÄôve never heard of will certainly pique curiosity. The real joy of CenÂ­tral, however, lies in the âÄ¦

âÄ¦ pan dulces, which are far and away the best of all three markets. The conchas are air y and just sweet enough to delight the palate without hurting any teeth. The elotes and panaderos are certainly rich and gooey, but more nuanced than the pure sugÂ­ar-fat of the other bakeries. There is, however, a price to this perfection: each of the massive confections costs a whole dollar. One whole dollar!

Across the street from the Mercado Central, SuÂ­permercado la Mexicana is more of a traditional grocery store and less of a street bazaar. It stands larger, emptier and colder than the previous markets; it lacks their soul. Even the employees seem distant and restrained, bored from sitting alone for hours. That being said, their selection of groceries is something like IâÄôd never seen before.

The ingredients here are phenomenal, of an incredible breadth and variety. Rows of queso fresco, tamale masa, papayas and tortillas. The chile and spice selections arenâÄôt outstanding, but are made up for by the butcherâÄôs counter âÄî a veritable menagÂ­erie of animals past. Without question, Supermercado la Mexicana is the place to head if you want to attempt some seriously impressive MexiÂ­can cooking.

The pan dulces are not a focus here as they were at Central, but they are a far sight better than those at La Alborada. And, at 80 cents they are an excelÂ­lent bargain. The elodes, panaderos and conchas all taste good, but nothing stood out in particular, just like the pastry sections in some other supermarkets that I know.