The Philadelphia Eagles have been using the Gophers' new facility since Monday. 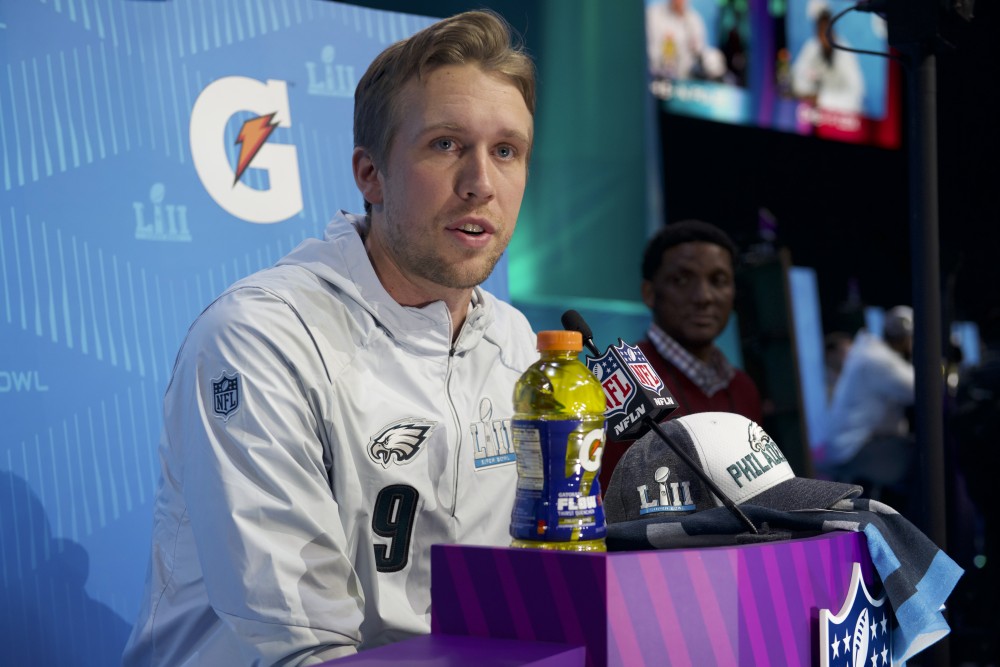 Philadelphia Eagles quarterback Nick Foles speaks with members of the press during the Super Bowl LII Opening Night event at the Xcel Energy Center on Monday.

Even with the college football season done and the Vikings out of the playoffs, the University of Minnesota campus can’t seem to escape football.

With Super Bowl LII coming to Minneapolis, the school has had to contribute to making the big game run.

The Philadelphia Eagles have been using the Gophers facilities and the new Athletes Village facility since Monday, and will continue practice there until the day before the big game.

“We’re in that locker room and that indoor [facility] is very nice,” Eagles running back Jay Ajayi said. “It’s been kind of cool for them to open their doors to us. I haven’t met any of the players there, but definitely appreciate them opening their doors and allowing us to practice in their facility.”

As the away team in the Super Bowl, Philadelphia uses the University’s facilities, while the Patriots are practicing at the Minnesota Vikings’ building in Eden Prairie. The Gibson-Nagurski Practice Facility, the old football practice facility, is the current practice home of Gophers softball and baseball.

The Gophers were allowed into the new Athletes Village project first on Jan. 17, but have not had practices on it, allowing the Eagles to break it in for them.

The Eagles said they had not had any contact with Gophers player during the process. Minnesota hasn’t been kicked out of all it’s buildings, though, with the new Larson Football Performance Center solely in their control, the Pioneer Press reported.

“They got their place well protected. They’re not letting people anybody in,” Eagles defensive lineman Fletcher Cox said. “When we’re there, we’re there for walkthroughs, practice, post practice deals, and then we’re out.”

The Gophers’ new facility has been under construction for more than two years, but now the $166 million project is up and running. Former Gophers coaches have long pushed for a new practice facility to compete for recruits, as opposing Big Ten teams look to do the same or already have.

“What a state-of-the-art facility,” Eagles quarterback Nick Foles said. “The locker room and everything about it is awesome. Haven’t run into any Gopher players but I can see that it would be easy to recruit here with the facilities they have.”