Lura mighty accomplished for a third-stringer 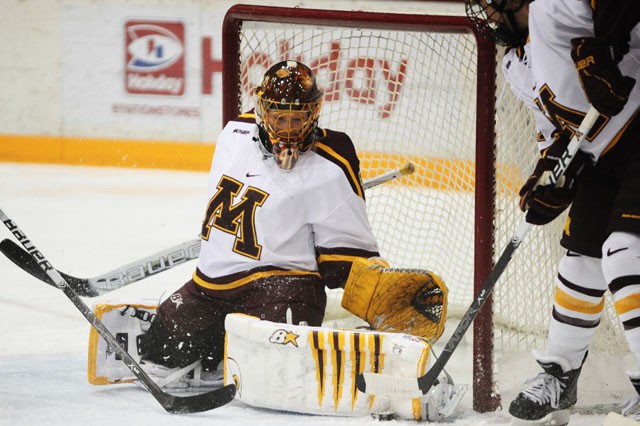 Every game since ninth grade, senior goalie Jenny Lura has listened to the Brad Paisley song âÄúMud on the TiresâÄù before heading on to the ice. But for the past two years, Lura hasnâÄôt had the chance to get âÄúmud on the tires,âÄù or more literally, ice shavings on her goalie pads. Lura, the GophersâÄô third-string goalie for the past two seasons, has seen her playing time all but disappear because of the emergence of Finnish phenom Noora Raty as the GophersâÄô top goalie and the steady play of her counterpart, junior Alyssa Grogan. It wasnâÄôt always this way. As a freshman Lura compiled a 10-4-2 record, a 1.92 goals allowed average and a .910 save percentage, good enough to make the WCHA all-rookie team. She was even better as a sophomore. While splitting time with Grogan she amassed a 15-2-1 record and allowed just 1.62 goals per game, the fourth-best average in the nation. With two solid years and a 25-6-3 overall record, Lura was on the rise. That was, until, Raty signed with the program. Raty, a goalie for the Finnish national team since age 15, was one of the top-rated goalies the program ever signed. And with Grogan coming off of a 16-2-2 season WCHA goaltending championship title, Lura understood her time in front of the net was about to significantly diminish, even though, head coach Brad Frost said, âÄúIf she was on another team, sheâÄôd probably be starting.âÄù âÄúItâÄôs obviously hard, âÄòcause the first two years I was a starting goalie here,âÄù Lura said. âÄúBut after a couple of weeks of realizing that I was going to be more of a supporter on the team, my attitude kind of changed to supporting the rest of my team and doing what I can in practice to help them get better.âÄù Lura has continued her team-first attitude, despite only playing four games in the past two seasons. âÄúTo have a real positive attitude and just to be really team-first is not easy, and sheâÄôs done a great job of that over the last two years,âÄù Frost said, âÄúI canâÄôt say enough about her attitude, or how sheâÄôs handled the situation over the past couple years.âÄù While Lura didnâÄôt expect much ice time this season, she got her first chance last weekend against Harvard. Raty left the game after taking a hard blow to the head in the second period Friday. With Grogan still sidelined due to an injury that has kept her out since mid-October, Lura got a shot. Lura saved all ten shots she faced and helped the Gophers preserve a 3-0 win over the Crimson. âÄúShe just came in and shut the door,âÄù Frost said, âÄúFor her and Noora to combine on a shutout like that was really big for our team.âÄù Raty was back in net on Sunday and barring another injury, Lura will probably continue her routine of the past two seasons: practice with full intensity during the week and watch with anticipation on the weekend. âÄúJust being a good teammate and working hard in practice, thatâÄôs all I can do,âÄù Lura said. Erickson returns to her hometown Junior Sarah Erickson brings a nice scoring streak into this weekendâÄôs series against her hometown school, Bemidi State. Erickson leads the Gophers with eight points in her last eight games. She has a point in each of the Gophers last four series and has come up clutch in key moments. She scored the game-winner against Minnesota State on Nov. 19 and the goal that put the game out of reach Nov. 5 against Wisconsin. EricksonâÄôs family will be in attendance over the weekend. âÄúYouâÄôre the main topic when you go back to youâÄôre hometown, so youâÄôve got to be on youâÄôre A game,âÄù Erickson said.