Maggie Bollig has developed into one of the top runners on the squad. 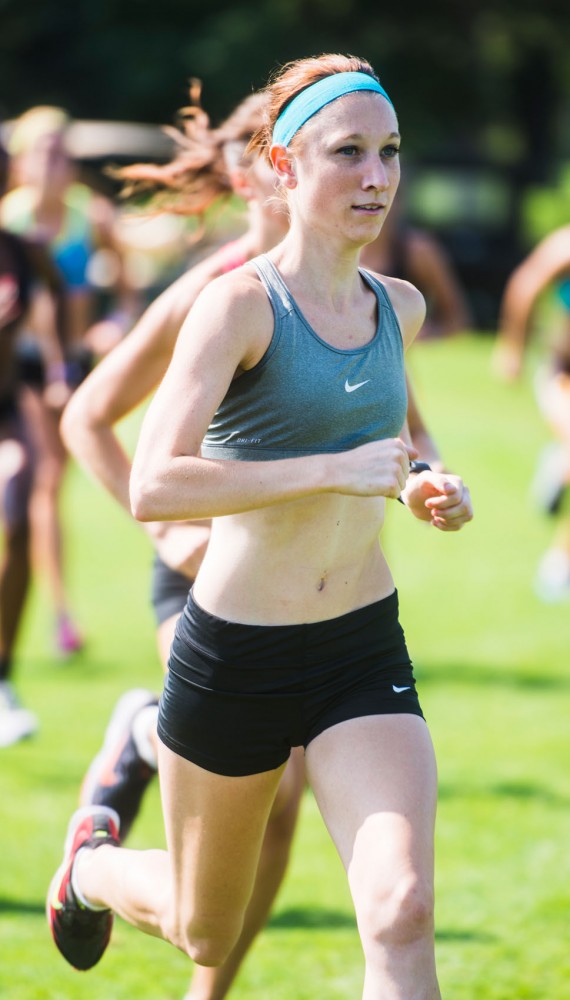 Maggie Bollig is starting this season right where she left off.

Bollig started last season with an eighth-place finish at the Oz Memorial. Steadily improving throughout the year and at NCAA Championships, she emerged as the third finisher on the team and 128th in the country.

Gophers women’s cross country head coach Sarah Hopkins said in years past, Bollig has been “kind of content with [the attitude], ‘I’m going to come in and just get better as I go.’”

This year, Hopkins said in her preseason meeting with Bollig, the senior said her goal was to start further up and keep improving.

“[She] has a little more confidence in her strength and [knows] that she’ll still be able to finish the season really strong even if she starts off a little stronger [than last year],” Hopkins said.

Bollig called last year her “breakout season” and credited part of her improvement to sticking with the top group of runners both in races and in practice.

Hopkins said that Bollig is starting to put herself at the front of the group instead of being in the top group but toward the back.

Bollig said one of her themes for the season is to get “comfortable with the uncomfortable” and to not be afraid to take risks in races or practices. That means closing gaps between herself and junior Molly Kayfes and senior Laura Docherty, the team’s top two runners.

Hopkins said packing helps runners gain energy from each other, and if runners are within 10-15 seconds of each other, the motto is to “suck it up and stick,” instead of falling behind the group.

So far, Bollig has been doing well closing gaps.

Senior Kelli Budd said she could see Bollig being the team’s No. 1 or No. 2 finisher at times during the season.

In the team’s Intrasquad 5K, Bollig finished about nine seconds slower than Kayfes, the top finisher.

She said one of her main goals for the season is to stay in the top-three mix. It’s important to close the gaps within the runners so the team can keep “the pack” close together, Bollig said.

Budd said she thought Bollig, as a senior, is “realizing that this is our last shot so you might as well push yourself to the next level.”

She said Bollig has a lot of positive energy and her confidence builds yearly.

As Bollig has ascended to senior status, Hopkins said she has seen consistency and improvement every year. After last year’s finish, Bollig said she is coming in confident.

“I just want to keep the momentum going and keep myself in a positive mindset all season,” she said. “And I think by doing that, hopefully I’ll be able to continue to meet all my goals this season.”