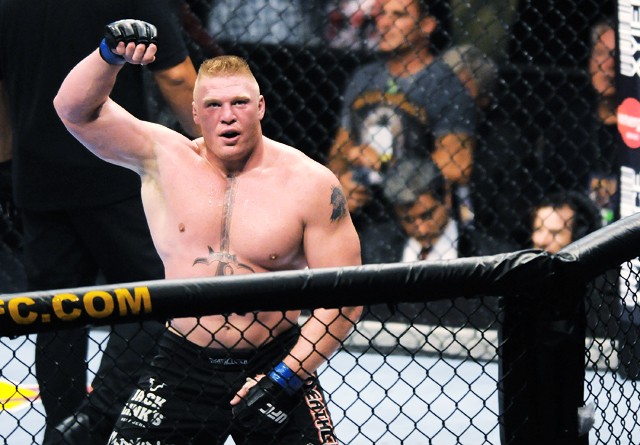 Former Gophers wrestler Brock Lesnar has been an NCAA champion, World Wrestling Entertainment champion and is now the heavyweight champion in the Ultimate Fighting Championship. Some say Lesnar may be the most promising fighter in UFC today, and his continued success could mean record ratings for the up-and-coming sport. That is, if he is ever able to fight again. In late October, Lesnar collapsed at one of his homes in Canada after battling what was thought to be a bad case of mononucleosis. UFC President Dana White told ESPN Radio that LesnarâÄôs problem is a perforated intestine, called diverticulitis. Lesnar recently had surgery, but itâÄôs unknown if the hole was completely closed. White said Lesnar had been fighting with the condition for a year. LesnarâÄôs Jiu-Jitsu trainer told TMZ recently that Lesnar would be back in six months. However, White said in a statement last week that Lesnar may never fight again. Whatever the case, LesnarâÄôs promising career is in jeopardy. From the farm to the U After two junior-college championships, Lesnar transferred to the University of Minnesota and was one of the largest people on campus, former teammate and current assistant coach Brandon Eggum said. âÄúThat car he first came to school in was a tiny little car, and it was hilarious to see this huge guy driving around in it,âÄù Eggum said. âÄúHe would have the front seat put all the way back, and it was hilarious to see him pulling down the street in this car. It didnâÄôt look right.âÄù Born and raised on a farm in Webster, S.D., Lesnar still keeps in touch with former mentor and high school wrestling coach John Schiley. Schiley speaks to Lesnar at least once a week, he said, and has only missed one of his high-profile fights. Schiley last spoke to Lesnar from his home in Alexandria, Minn., on Sunday. He said Lesnar sounded like he was in a large amount of pain. âÄúHe was resting comfortably,âÄù Schiley said. âÄúHeâÄôs going to the Mayo Clinic on Monday, and then it will be a bit before doctors decide if he will fight again. He thinks he will be fighting again.âÄù If LesnarâÄôs career was to end and his upcoming fight against Shane Carwin was to be canceled, UFC would be missing out on a considerable amount of revenue; the league had billed the fight as the most anticipated heavyweight bout in UFC history. Steroids and the media Some have speculated that steroids were a contributing factor to the illness, but Lesnar has always denied taking any performance-enhancing drugs. LesnarâÄôs enormous size has always drawn such speculation, Gophers wrestling coach J Robinson said. âÄúBecause heâÄôs so big, every conversation somehow gets back to [steroids]. I had him tested when he was here; he was fine with it, and there was no problem,âÄù Robinson said. âÄúPeople want to jump to conclusions instead of just giving him his due.âÄù Robinson noted that Lesnar never failed a drug test throughout his college career. From his high school wrestling days to his fights in the octagon, Lesnar has always garnered a considerable amount of attention. âÄúHe draws a crowd,âÄù said assistant wrestling coach Joe Russell, who worked with Lesnar. âÄúMedia inquiries went up a ton. It was stressful for him; he did not want to be high profile. But now heâÄôs parlayed it into a career.âÄù Media and public attention have followed Lesnar through all of his endeavors, especially during his stressful time in WWE, Schiley said. Once, Lesnar flew Schiley out to spend 10 days with him on the road for the WWE tour, Schiley said. From morning until night, Lesnar balanced workouts with autograph inquiries, he said. âÄúYou couldnâÄôt stop and eat,âÄù Schiley said. âÄúSometimes, [Lesnar] would throw on some greasy coveralls and a trucker hat and try not be noticed. Sometimes he would be, and sometimes he wouldnâÄôt.âÄù Schiley said Lesnar would not be devastated if his health problems keep him from fighting in the UFC. âÄúHe knows he canâÄôt fight forever,âÄù Shiley said. âÄúIf itâÄôs time to stop, itâÄôs time to stop.âÄù