Minnesota went to extra sets with both Michigan State and Michigan at home. 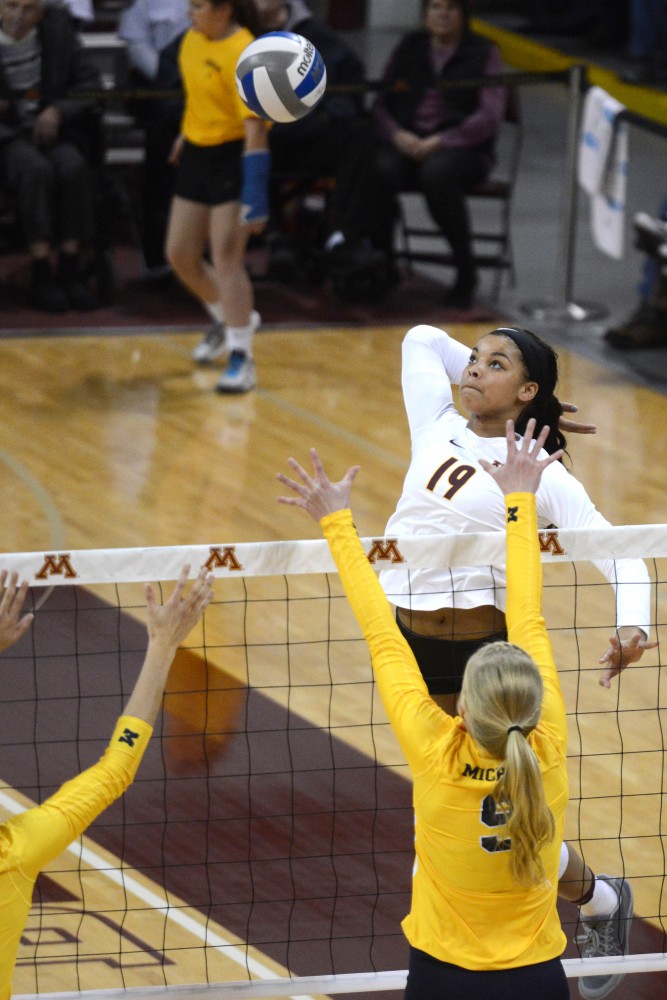 Gophers outside hitter Alexis Hart winds up a spike against Michigan on Sunday, Nov. 20, 2016 at the Sports Pavilion.

The Gophers played their first matches back at home over the weekend after a three-game road trip — and they certainly made things interesting.

No. 2 Minnesota won five-set matches Friday and Sunday against No. 13 Michigan State and No. 18 Michigan in thrilling conditions.

Minnesota took the first two sets in each match, but dropped the next two to force a fifth both times.

“It’s life in the Big Ten,” said head coach Hugh McCutcheon. “It’s a game of inches. All the sets were closely contested, and that’s what happens when you play a good team.”

Minnesota (23-4, 15-3 Big Ten) faced one of the hardest-hitting teams it has all year in Michigan State (23-7, 12-6 Big Ten) Friday. Earlier in the year, the Spartans beat the Gophers and dealt them their second Big Ten loss.

A more defensive Gophers lineup, which included increased roles from Katie Schau and Alyssa Goehner, helped dig the Gophers out of sticky situations. The team amassed 67 digs in total.

The hero of the game proved to be freshman Alexis Hart, who twice delivered kills when the Gophers faced Michigan State’s match point.

Hart led Minnesota with 20 kills and hit a staggering .419.

“One of the strengths of this team is that at different times it’s been different people [leading], but it’s always been someone, and tonight, obviously, it was Alexis,” McCutcheon said.

Minnesota found itself in a similar situation against Michigan (21-9, 10-8 Big Ten) Sunday after the Gophers won the first two sets and dropped the third and fourth.

With Minnesota trailing deep into the fourth set, several controversial calls got the Minnesota bench riled up and elicited a conversation between McCutcheon and the line judge.

Michigan ended up taking the set 25-23 to force a deciding fifth set.

Minnesota took control of the fifth set early and went on a 5-1 run with kills from senior outside hitter Sarah Wilhite and junior middle blocker Molly Lohman.

Wilhite carried the team through the final set to a 15-12 victory and a 3-2 match triumph.

Wilhite had 26 total kills, as well as 13 digs on the defensive side.

Sophomore setter Samantha Seliger-Swenson had seven kills to go along with 55 assists, a big offensive output for a setter.

“I was just trying to be confident in [my attack] and do anything I could to help my team win,” Seliger-Swenson said. “It was working well, so I just continued to do that.”

Junior libero Dalianliz Rosado was the backbone of the Gophers defense and tallied 24 digs — a team high.

Despite already facing two high-class opponents on this final homestand, the competition only grows from here.

“If we play Gophers volleyball, and if we play good for a long period of time, I think we can get them,” Wilhite said.