The new location will be a more convenient place for U students to campaign. 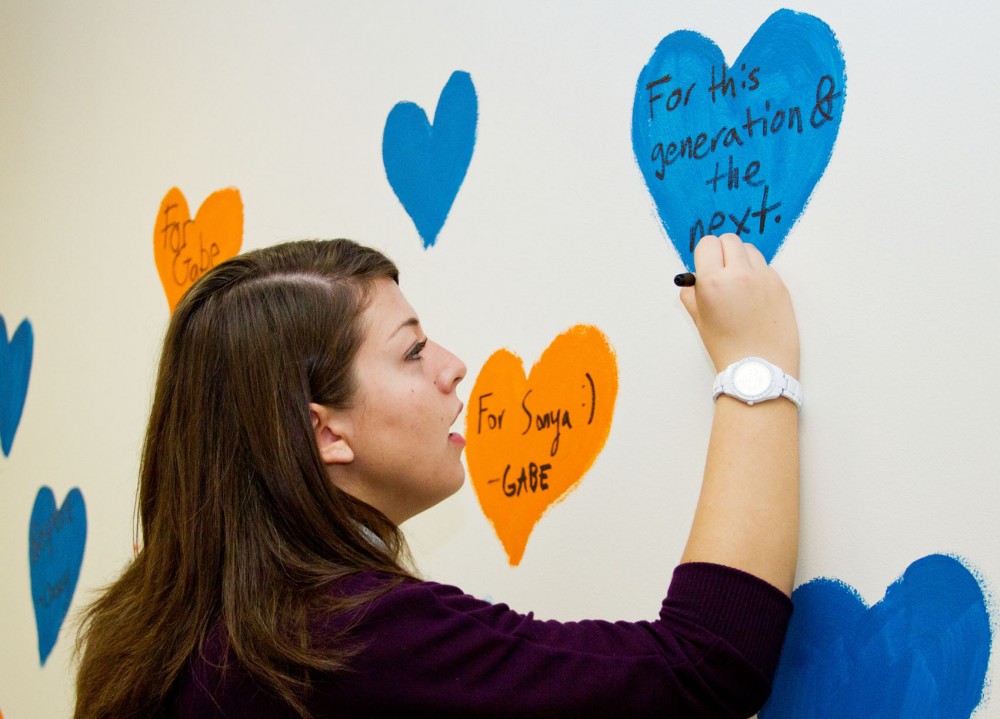 Alissa Clark helps decorate the walls in the new Minnesotans United for All Families office in Dinkytown. The organization held an open house on Saturday to kick off the final few weeks of the campaign.

With just over two weeks left until Election Day, opponents of the marriage amendment are narrowing in on the University of Minnesota campus.

Minnesotans United for All Families, the main opponent of the amendment to constitutionally define marriage as between one man and one woman, opened a temporary office in Dinkytown on Saturday.

The new “action center,” located in the University Technology Enterprise Center, will provide a next-to-campus space for University students to participate in Minnesotans United campaign activities.

“We’ve had so many students on campus who have been involved with the effort to defeat the amendment,” Minnesotans United spokeswoman Kate Brickman said. “We just wanted to be able to have one space that was large enough to accommodate everyone and that could be a regular place for students to come and get involved in the final weeks of the campaign.”

The new action center near Burrito Loco and Duffy’s Dinkytown Pizza will be used for phone banking and in-person volunteer recruitment. It’ll also be a place for students to meet before campaigning on campus.

Mike Griffin, youth organizer for Minnesotans United, said the group will ramp up its campus efforts as the election approaches.

Explaining what the amendment means, Griffin said last week, is “going to take us having conversations with literally as many students as possible over the next 18 days, and that’s something this office is going to be able to do.”

Minnesotans United has dozens of action centers around the state, Brickman said. The campaign’s main offices are in St. Paul on West University Avenue and in Minneapolis near Loring Park.

Brickman said she believes it’s important for the campaign to have a place that’s accessible to students who are often too busy with classes and work to travel to offices off-campus.

“I know that students have really busy lives on campus. This is just a great way right on campus for students to get involved in a way that fits in with their lives,” she said.

Aderhold lives in Pioneer Hall and said the new location is more accessible.

“It’s more convenient than the downtown office,” he said. “It’s much easier for students that live on campus to get to.”

He plans to go to the location often to participate in evening activities such as phone banking.

At Saturday’s event, members of Minnesotans United painted their names and reasons for voting down the amendment on the wall inside hearts in blue and orange — the colors of the campaign.

They then took to the Marcy-Holmes and Southeast Como neighborhoods, door-knocking and talking to people on the street about the amendment and the campaign.

Griffin said Minnesotans United will try to reach as many students as possible through a variety of social media platforms and activities like canvassing and door-knocking.

Griffin said he feels that young people are important to the Minnesotans United campaign because the marriage amendment directly affects them.

He said the final two weeks will be crucial to getting students to the polls.

“I feel very strongly that we need to include and empower as many young people to be involved in this campaign as possible,” he said.