Susan Gaertner’s gubernatorial candidacy has been marked with activists’ accusation of political motivations in the courtroom. 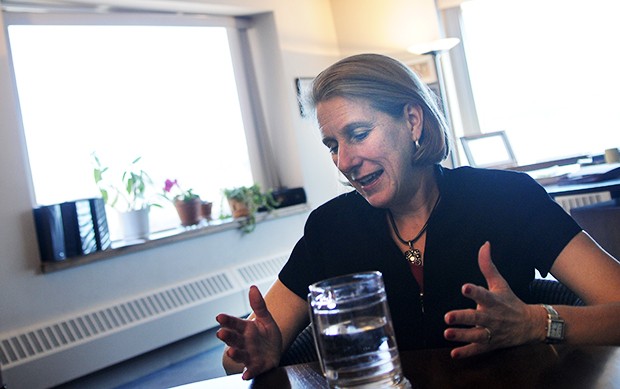 Ramsey County Attorney Susan Gaertner , the county’s top prosecutor, is seeking the DFL endorsement for governor. Her office is currently prosecuting the RNC 8.

When Ramsey County Attorney Susan Gaertner heard the Republican National Convention was coming to St. Paul, she didnâÄôt welcome the idea. Her reaction was âÄúnot printable,âÄù she said from her downtown office, overlooking the river and the site of an RNC mass arrest. âÄúTake âÄòoh, phooeyâÄô and kind of start there.âÄù As the countyâÄôs top prosecutor, Gaertner knew sheâÄôd find herself at the center of controversy after her city agreed to host what turned out to be a highly contentious event with about 800 arrests logged over four days in early September. âÄúBasically nobody got hurt, thatâÄôs important. The Republicans got their business done, theyâÄôre gone,âÄù Gaertner said. âÄúIâÄôm left with the rest.âÄù And now, as she seeks the DFL endorsement for governor, sheâÄôs juggling dual roles as a candidate and a prosecutor under fire for leveling divisive charges against leftist protesters. The criminal reports from the St. Paul Police and Ramsey County SheriffâÄôs departments during the RNC were funneled to GaertnerâÄôs office, per protocol. From there, she and her staffers decided which cases merited criminal charges. The vast majority of the arrestees went uncharged or had their charges dropped. But more than seven months later, eight activists, arrested preemptively in late August for allegedly planning to violently disrupt the RNC, remain in a high-profile legal standoff with Gaertner.

Changed charges
Gaertner says sheâÄôs confident her office can prove beyond a reasonable doubt that the activists, dubbed the RNC 8, conspired to riot and damage property. They say her prosecution is a political move meant to make examples of them. The charges filed against the eight activists previously carried terrorism enhancements under the controversial PATRIOT Act . Coupled with the fall announcement of GaertnerâÄôs run for governor, the RNC 8 launched a campaign of its own to vilify the attorney and condemn the charges as politically motivated âÄî a showpiece for potential voters. Gaertner, who said the charges were initially filed by a different prosecutor in her office, has maintained the charges followed the law âÄî MinnesotaâÄôs version of the PATRIOT Act. Earlier this month, GaertnerâÄôs office dropped the terrorism enhancements. The activists said that move was also political, and a result of mounting pressure they and allies within the DFL party put on Gaertner to avoid using the PATRIOT Act to label political organizers as terrorists. âÄúThe fact that we dropped the terrorism charges isnâÄôt even a commentary on whether or not we can prove it,âÄù Gaertner said. âÄúIt was a commentary on whether or not it was good trial strategy to keep going, whether it was going to produce a just result. We didnâÄôt think so.âÄù The prosecutor has said from the day she announced the dropped charges that the word âÄúterrorismâÄù could confuse or distract potential jurors. According to sentencing guidelines, the activists face five yearsâÄô probationary sentence, which could include, for example, jail time or community service, but not prison. The potential sentence wasnâÄôt altered by the terrorism enhancements. University of Minnesota student Max Specktor , who is part of the RNC 8, said thatâÄôs a clear indicator that the terrorism charges were unnecessary. âÄúIt goes to reinforce the idea that the PATRIOT Act was a political tool,âÄù he said. âÄúIt wasnâÄôt just them trying to punish us for a crime we committed. It was just a political maneuvering.âÄù Gaertner, speaking as a candidate outside her administrative office, hinted that the controversy-wrought statute is bothersome. Legislators have even spoken against its application in the RNC 8 case, she said. âÄúThe law has to be looked at,âÄù the candidate said. âÄúI think it should be revisited, repealed, reformed because we came to the conclusion that it doesnâÄôt comport with the community.âÄù Gaertner could have used her discretion as a prosecutor to avoid using the PATRIOT Act altogether, Specktor said. But Gaertner said as a prosecutor, sheâÄôs obligated to enforce the laws passed by the Legislature. âÄúWe canâÄôt, on a routine basis, pick and choose the laws we want to enforce,âÄù she said. âÄúThat would be an abuse of discretion.âÄù
The road to the Capitol
From her kick-off fundraiser in late fall, the RNC 8 and supporters have shown up along the campaign trail to rally outside GaertnerâÄôs events. That night, the activists announced their tongue-in-cheek endorsement of the prosecutorâÄôs gubernatorial bid. And while Gaertner said she doesnâÄôt tune out the boisterous festivities the RNC 8 has pledged to bring to her events throughout the campaign process, she said they donâÄôt particularly bother her either. âÄúAs long as people are respectful and as long as theyâÄôre not abusive or threatening, itâÄôs not a problem,âÄù she said. The RNC 8 prosecution has been challenging, Gaertner said, speaking as a candidate âÄî not as an attorney. âÄúI donâÄôt want to oversimplify this, but IâÄôve had my life threatened, IâÄôve had my tires slashed, IâÄôve been called all kinds of names in connection with prosecutions,âÄù she said. âÄúHaving a few political struggles over a decision that I made isnâÄôt going to weigh me down.âÄù Specktor and RNC 8 supporters say the charges, even without the terrorism enhancements, could set a serious precedent for political organizing by criminalizing it. âÄúWeâÄôre still facing jail time and I still donâÄôt want to go,âÄù Specktor said, noting that the charges he and his co-defendants face are for âÄúconspiracyâÄù âÄî not an actual act that occurred. A certain segment of the DFL, predominantly its activist community, has been encouraged by the RNC 8 to express discontent with GaertnerâÄôs prosecution. But the candidate remains optimistic of her chances to secure the partyâÄôs nomination and the stateâÄôs top office. âÄúIt comes with the territory,âÄù she said. âÄúIt isnâÄôt something thatâÄôs going to affect the general election.âÄù University of Minnesota-Morris political science professor Paula OâÄôLoughlin said Gaertner is probably right. âÄúTo the extent that she increases her name recognition among the delegates as well as the greater Minnesota public, she benefits from this,âÄù OâÄôLoughlin said. âÄúIâÄôm not saying sheâÄôs doing this prosecution for this purpose, but it doesnâÄôt hurt her.âÄù Plus, securing the nomination requires the support of those active in the party, not necessarily the people involved in protesting the RNC 8 prosecution. âÄúAnd even though probably some party activists are not happy about what sheâÄôs doing,âÄù OâÄôLoughlin said, âÄúif they think she is the strongest candidate, they want her to emerge from the convention.âÄù Gaertner, in line with OâÄôLoughlinâÄôs analysis, isnâÄôt shaken by the criticism. But for now, she has to strike the most comfortable balance she can between her two roles. âÄúClearly the RNC prosecutions have not been politically advantageous to me,âÄù she said, as a candidate. âÄúI have to separate the political from my role as a prosecutor.âÄù âÄîKarlee Weinmann is a senior staff reporter