The new restaurant fills a hole in Uptown’s dining scene 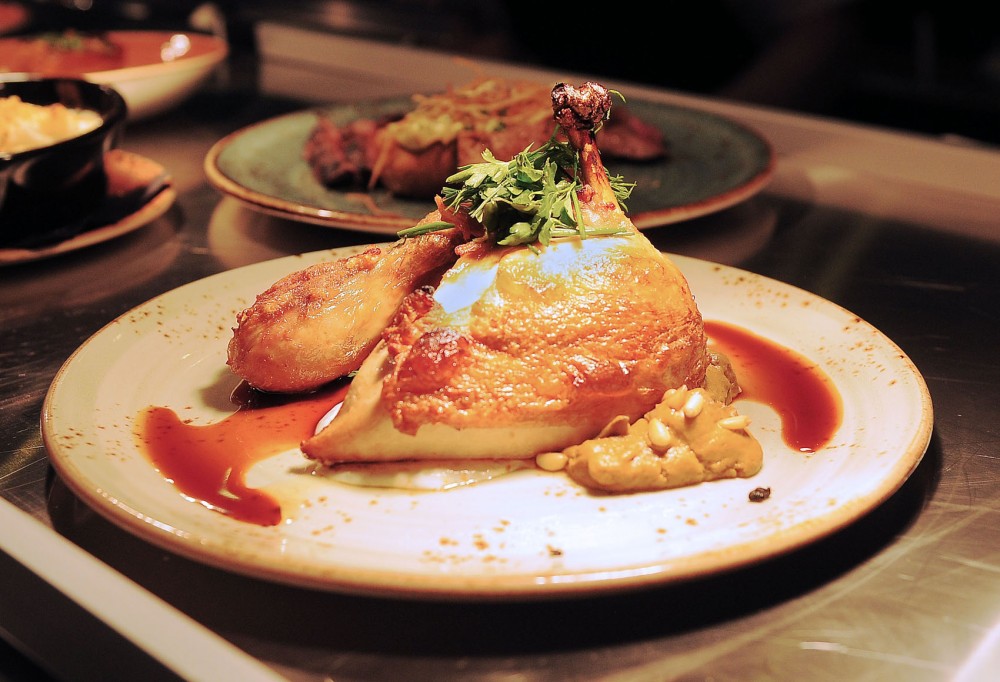 A coup d’etat means overthrowing an established order in the pursuit of different ideals. Uptown’s new restaurant, Coup D’Etat, lives up to its name. It doesn’t just change the area’s dining; it seizes it with force and turns it upside down.

Coup D’Etat is more New York City than Lake and Hennepin, thanks to the dÃ©cor. The chandelier above the bar, the huge patterned installation in the back and a large group area resemble a mix of Great Gatsby elegance and the street-cred of the “Watch the Throne” album cover.

The ornate back wall design, crafted by a Coup D’Etat staffer, perfectly balances out the half-finished nautical mural adjacent to it. If the setting were slightly less modern, it would have felt at home in “Mad Men.”

But you can still channel your inner Don Draper by ordering a Parlour Old Fashioned, a strong mix of bourbon and rye that lightweights should avoid. Coup D’Etat’s version, crafted by bartender Jesse Held, is punctuated by piloncillo, a Mexican sugar that balances out the bitter liquor. Besides the Old Fashioned, Coup D’Etat offers nine other cocktails, an extensive wine list and a craft brew-heavy beer selection.

Coup D’Etat’s menu is what separates it from the neighborhood’s bars and Barbettes that deliver good food but lack the quintessential oomph — instead serving plate after plate of palatable but insipid burgers, fries, chicken wings and tacos. Coup D’Etat does not serve bar food.

Coup D’Etat’s deviled eggs show why they’re a trend again. The delicate ova are topped with smoked trout roe, and a hint of preserved lemon adds a bitter sweetness.

Coup D’Etat also excels at complex salads, exemplified by a winning escarole (long-leafed endive) and treviso (similar to radicchio). The piquant, smoky blue cheese bounces off ripe medjool dates, and marcona almonds add a smooth crunch. With varied flavors, it functions well both as a starter and a palate cleanser.

The main dishes are meant for sharing, and the pizzas are no exception. They’re a marriage between Minnesota-style square-cut pizzas and Neapolitan cooking methods — imagine if Red’s Savoy and Punch Pizza had a one-night stand.

The sausage pizza is particularly good. Beef and pork Italian sausage are accented with juniper, chile flakes, garlic and fennel, and topped off with crunchy red onions. The veggie pizza is also wonderful — topped with roasted San Marzano cherry tomatoes and mushrooms that melt in your mouth. The understated presence of kale rounds out the pie.

Don’t miss the tagliatelle, one of four pasta dishes. Creamy porcini mushrooms are the star of the show, complementing but not overpowering the subtle pancetta and pearl onions.

Coup D’Etat also puts a new spin on spaghetti and meatballs. Their version uses curly, homemade egg noodles and meatballs that capture the retro Italian-American trend. A mixture of beef and pork, they’re spicy and substantial — the crown jewels of the dish.

Though not advertised on the menu, the restaurant does serve dessert. The obvious choice was the mini-donuts. Six small beignets are paired with candied bacon and spicy Mexican chocolate sauce. The flavors are sensual, reinforcing why chocolate is an aphrodisiac (and why, in certain circles, donuts and bacon may be as well).

For diners wanting to wet their whistle on more typical Uptown pub fare, fear not. Coup D’Etat will have you covered — come spring. An after-hour walk-up window is in the works. According to Chef Tyler Shipton, the window will be open from around 12 a.m. to 3 a.m. and will serve the burgers, fries and wings bar-goers know and love.

Service at Coup D’Etat went above and beyond, which is rare for a newly opened restaurant. Servers checked in frequently without being bothersome and were happy and willing to talk about the food. Other Twin Cities restaurants take note: This is how you keep customers coming back.

Be prepared for high noise levels — from the second floor balcony, it was easy to hear first floor conversations. And if you go on a weekend, expect a long wait.

Prices are reasonable, especially considering the quality of food in Uptown’s haute cuisine wasteland. Dishes are made for sharing, making Coup D’Etat ideal for both date nights and large meals with friends or family.

If you’re headed out for a casual dinner in Minneapolis, Coup D’Etat is the place to see and be seen and also to be taken by the food. Why would you go to a restaurant where the food doesn’t seize you by force?