The freshman came to Minnesota from England to play NCAA golf. 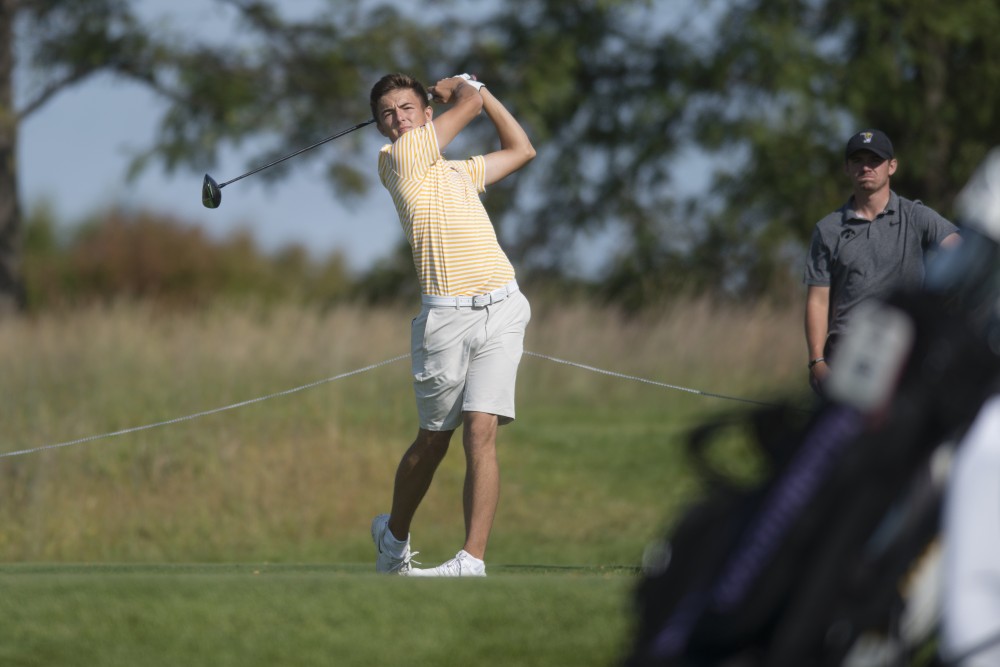 The Minnesota men’s golf team relies on international recruiting as an integral key to their success, a fact associate head coach Justin Smith knows better than anyone.

“We’ve always had a strong international presence,” Smith said. “Being a northern program, you have to focus there. Priority number one is our home state, then you look at the Midwest and then you look internationally pretty quickly thereafter.”

In recent years, European golfers have played important roles for Minnesota. Rúnar Arnorsson, who hails from Iceland, graduated in the spring after four successful seasons with the Gophers. Englishman Angus Flanagan came to the Twin Cities last season and immediately became one of the squad’s most important members.

After bringing Flanagan aboard, coach Smith once again focused his efforts on Surrey County, England, located just south of London, where he recruited Harry Plowman-Ollington.

“I got along with coach Smith really well,” said Plowman-Ollington, citing that chemistry as a big reason for choosing Minnesota. “When coach Smith and [Director of Men’s Golf John Carlson] … invited me to the U, I really enjoyed the prospect of coming around here and studying and being an athlete.”

Plowman-Ollington was one of the top young golfers in England. He came in 10th place at the Carris Trophy in 2017, England’s Under-18 championship.

“Harry is someone we did a lot of homework on,” Smith said. “He has an absolutely great family, he’s a great kid — very, very smart kid. He’s a great fit with our program and he has worlds of talent, so we’re excited to see where it goes.”

It’s no coincidence that he joined his Surrey golf teammate, Flanagan, at Minnesota. Plowman-Ollington said the two were in contact despite having an ocean and half-continent between them.

“When I had my visit, [Flanagan] was the one who helped show me around,” said Plowman-Ollington. “It influenced my decision quite a lot.”

The two are excited to reunite with the Gophers and compete together moving forward.

“It’s really nice, to be honest,” Flanagan said of Plowman-Ollington joining the team. “We played a lot of junior golf together.  It’s just nice having someone there who I’ve known for a while. It’s made it easier for him to gel with the boys, I think.”

The transition to college is even more difficult when the student travels abroad to a different culture and coach, a difficulty Smith acknowledged.

For Plowman-Ollington, the opportunity to come to America was appealing in large part because of the nature of college golf in the United States.

“It’s a completely different environment,” he said. “There’s so much money put into it, there’s nothing like it back home. It’s kind of cool seeing the nationals last year and seeing the winners on T.V., stuff like that. It’s quite cool.”

Despite the distance created between friends and family back home, coach Smith said coming to the United States to play college golf is often in the best interest of recruits.  When pitching Minnesota, he always made sure to explain the benefits of playing Division-I golf.

While the coaching staff is excited about Plowman-Ollington’s prospects, he may have to wait to join Flanagan as a regular in the Gopher’s starting lineup.  In his college debut at the Gopher Invitational, Plowman-Ollington competed with the B-lineup, shooting a 54-hole score of 245 (+32).

“It takes some time for them to settle in,” Smith said of international players. “But in the long-run, it’s always a win.”