Mixed Precipitation brings their unique style to an opera about busted kneecaps and bruised egos. 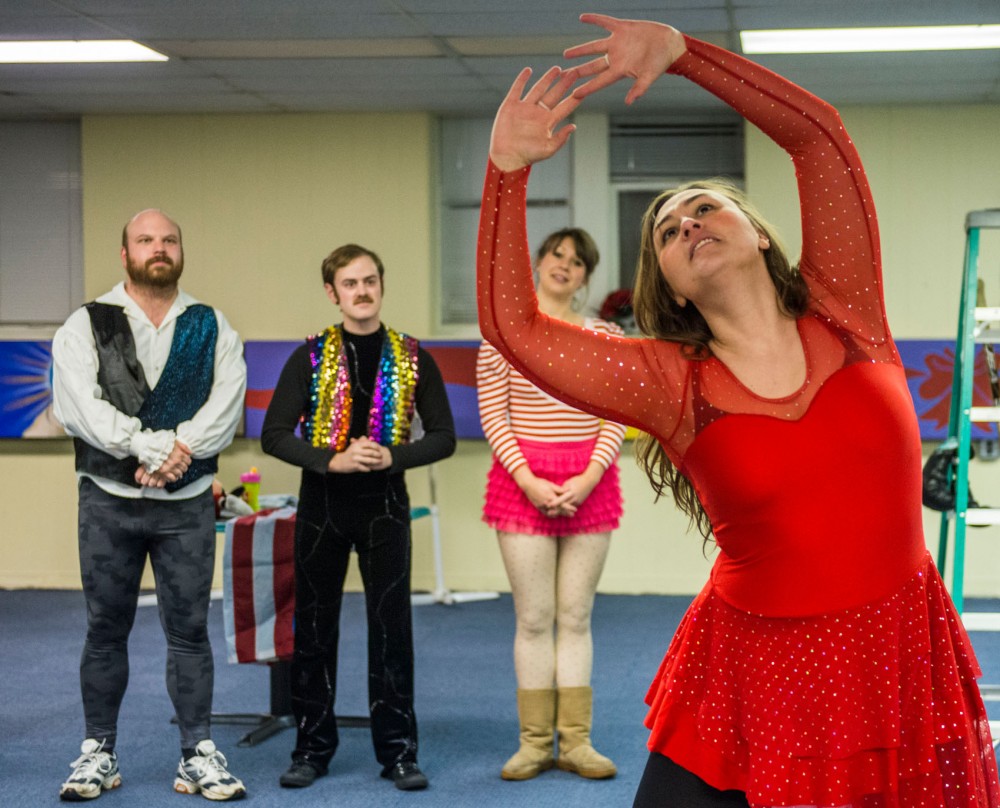 Performers from Mixed Precipitation rehearse in Minneapolis on Tuesday. The company will perform "Tonya and Nancy: The Opera" at the Amsterdam Bar and Hall on Thursday.

Downing shots while listening to a soprano nail an aria might not sound like Thursday night plans.

Scotty Reynolds of Mixed Precipitation — a performance initiative that stages everything from operas to Harold Pinter — would disagree. He’s staging his latest show at the Amsterdam Bar.

“I’ve always been interested in creating opportunities for social connectivity, which is sort of me toying with the idea of social change,” said Reynolds, artistic director for the group. “I don’t think the fact that this is in a bar is the most important thing about the piece, though.”

The company’s latest production is a staging of librettist Elizabeth Searle and composer Abigail Al-Doory, “Tonya & Nancy: The Opera.”  In only 30 minutes, the work tells the scandalous story of Tonya Harding and Nancy Kerrigan, two U.S. figure skaters in the 1994 Winter Olympics.

The specifics of what happened are still under debate, even 20 years later, but the tale goes like this: Harding and Kerrigan were both competing for spots on the U.S. team, and in order to secure her spot, Harding’s ex-husband hired someone to break Kerrigan’s leg so she couldn’t skate. The job was done, but it only left Kerrigan with a bruised kneecap, and she went on to take silver in ’94.

It’s all dramatic and slightly ridiculous, which is perfect for Mixed Precipitation’s interpretation of “Tonya & Nancy.” The text of the opera is something of an oral history of the scandal. It’s taken directly from news reports and interviews with the skaters.

While Reynolds said that the work isn’t going to change the way we look at society forever, it’s not pure campiness.

“It’s musically demanding, it’s taxing on the body and, like figure skating, it’s got to come off as graceful,” he said.

The score for “Tonya & Nancy” is atonal and modern, which plays up the melodrama of the situation with sharp changes in rhythm and pitch.

“I loved figure skating as a kid and remember practicing the routines in my house while it was on television,” Reynolds said. “It seems sort of funny, and it is, but the sincerity of it is what we’re trying to capture.”

Leah Reddy, who plays Kerrigan, said the many obstacles provided by the piece — the performers must mimic other Olympic sports and interact with the crowd on top of the music and choreography — are what make it exciting.

“It changes so rapidly,” she said. “The ensemble tries to be curlers while dealing with constant time signature changes. It’s challenging.”

Reddy grew up figure skating and provided the spark inspiring Mixed Precipitation to work on the piece. Her husband was flipping through ESPN the Magazine in 2006 and found a small article on the premiere of the opera.

“He told me that if I ever had an opportunity to do it, I should,” she said. “My friend pointed me in Scotty’s direction, and here we are. It’s one of the craziest ways to combine these two parts of myself.”

“Tonya & Nancy” certainly isn’t framed like most works — the Sochi women’s figure skating long program will be playing during the performance, and the piece will be peppered with Olympics trivia for the audience.

“The Olympics bring people together in a room to share an experience that’s happening thousands of miles away,” Reynolds said. “We want to encapsulate that in our performance.”