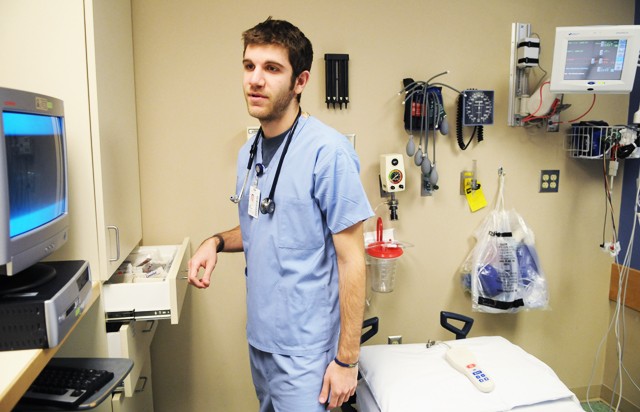 In a field where women outnumber men by a 16-to-1 ratio nationally, a group of University of Minnesota male nursing students have come together this semester for some male bonding and to increase awareness of their craft. âÄúWhen people find out IâÄôm in nursing school, some people will say things like âÄ¦ âÄòwhy donâÄôt you be a doctor?âÄô âÄù senior nursing student Amir Zadaka said. âÄúNursing offers the opportunity to really get to know the patient.âÄù Zadaka started the group Men Enjoying Nursing (MEN) this year after being named a Densford scholar. Zadaka started MEN to fight the stereotype that nursing is a womanâÄôs profession. âÄúWhen people see and respect what you do, and you do it well, then gender doesnâÄôt matter,âÄù Zadaka said. Male nursing students at the University are outnumbered by a 6-to-1 ratio. There are 116 men enrolled in the nursing school this semester, compared to 730 women, according to statistics from the University Office of Institutional Research. Zadaka said a loose form of the group has been around for a few years, but that it was officially registered this semester. The group held its first meeting in late October, when a male nurse spoke about volunteer work he did in Kenya, Zadaka said. Throughout the spring semester, Zadaka hopes to get male nurses with various types of experiences to speak at monthly meetings. âÄúSince men are underrepresented, itâÄôs kind of [about] just coming together and acknowledging the fact that there are men in nursing and that there are men in nursing doing great things,âÄù Zadaka said. MEN is the newest of a crowd of groups at the University that cater to an underrepresented gender in a certain major. The Society of Women Engineers (SWE) at the University caters to the 1,517 women that make up 20 percent of the Institute of Technology student body. Claire Rydeen, SWE secretary, said the group gives women engineers âÄúa support system âÄ¦ to help them succeed.âÄù Nationally, 5.8 percent of registered nurses in 2004 were men, according to that yearâÄôs National Sample Survey of Registered Nurses, administered by the U.S. Department of Health and Human Services. The survey reports the âÄúnumbers [of male nurses] have continued to grow,âÄù as 5.4 percent and 4.9 percent of nurses were male in 2000 and 1996, respectively.