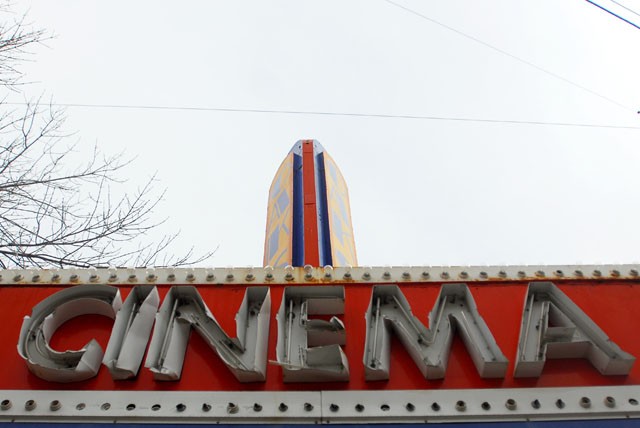 Converted into a theater from an old garage, the Oak Street Cinema has lost much of its original art deco renovations. Even its marquee sign has been extensively altered.

Another Doran Companies student-housing complex could replace the 95-year-old building that houses Oak Street Cinema in Stadium Village.
Doran Companies has yet to purchase either the cinema or adjacent Golden Bowl building but has already begun seeking the approval from the city of Minneapolis for its construction plans. The developers have proposed a six-story apartment building with retail space on the bottom floor. Doran Companies also built Sydney Hall and renovated the Dinkydome, and its 412 Lofts is under construction.
Last week, the Minneapolis Heritage Preservation Commission approved the demolition of the Oak Street Cinema after determining the building is not a historical landmark.
The HPC did not determine the building was unsafe or dangerous but found it has not retained its historical integrity, according to the commissionâÄôs report.
Built as a garage in 1916, the building was converted to be the Campus Theatre in 1935. But much of the art deco renovations and designs have been lost since then.
Ornamental designs that once ran up the front faÃ§ade are gone, and the marquee has been extensively altered.
Doran CompaniesâÄô proposed Oak Street Flats would sit next to another development companyâÄôs planned complex, Stadium Village Flats.
Originally Opus Development CorporationâÄôs Stadium Village Flats were to be twice as large, knocking out the Oak Street Cinema and Harvard Market. But developers later decided to scale down the project, leaving the cinema lot out of its plans.
The HPC also approved the theaterâÄôs demolition in 2008 before Opus Development Corporation downsized the plans.
City planner John Smoley said the commission didnâÄôt ask for community input when approving the theaterâÄôs demolition but said the areaâÄôs property owners had been notified of the hearing and will continue to be notified of hearings in the future.
A sole community member protested the demolition at the commissionâÄôs hearing, hoping to preserve the theater, Smoley said.
A block of history
If Doran Companies follows through on its proposal, the Golden Bowl building, which once housed Lotus Vietnamese restaurant, would also be demolished.
Originally the Golden Bowl building was built for a Red Barn fast food restaurant. It was a site for many Red Barn protests in 1970.
The protests were in response to another Red Barn being built in Dinkytown, which, to the protesters, symbolized a corporate invasion of campus. Some protesters were arrested, and a car was even driven through the windows of the restaurant during the protests.
To mitigate the loss of the Oak Street Cinema, the HPC approved the demolition under the condition that the building be documented for the Minnesota Historic Property Record.
Additionally, the marquee and 10 original light fixtures in the auditorium will be kept by Minnesota Film Arts, which currently owns the theater.