Joel Maturi will step down as AD but stay on for a year as a special assistant to President Eric Kaler, making his same $345,000 salary. 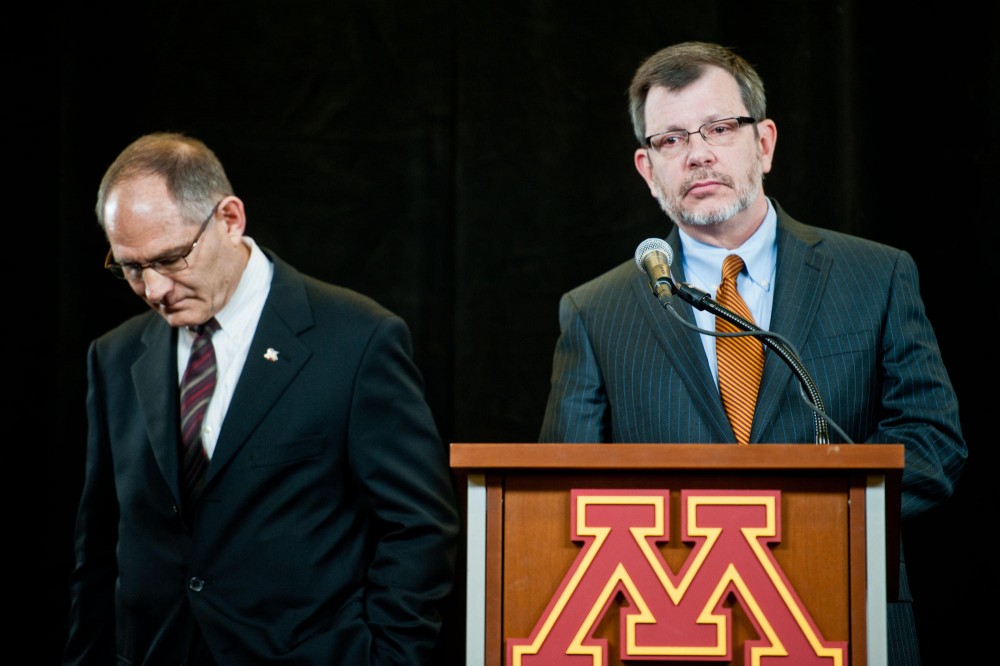 Minnesota athletic director Joel Maturi, left, announced he would step-down from his position during a press conference with University President Eric Kaler, right, on Thursday morning at TCF Bank Stadium.

After 10 years marked by struggling teams and the construction of a new football stadium, Joel Maturi will step down as the University of MinnesotaâÄôs athletics director June 30.

His retirement announcement Thursday ended more than a year of speculation about his future with the University. He choked on his words as he talked about the end of his time at the school.

âÄúIt makes a lot of sense to make a change now,âÄù he said at a press conference Thursday morning with President Eric Kaler. âÄúWe have a new president, and we have an old athletics director.âÄù

The national search for MaturiâÄôs replacement will begin as soon as possible with the intent of installing the next athletics director in July, Kaler said.

But Maturi wonâÄôt be leaving the University for another year. HeâÄôll stay on through June 2013 to teach and help with course development in the College of Education and Human DevelopmentâÄôs kinesiology department. Maturi will also help with fundraising and âÄúspecial projects.âÄù

In that newly created role as a special assistant to Kaler, heâÄôll receive the same $345,000 salary âÄî plus benefits and contributions to his retirement fund âÄî he has collected since his last contract extension began in 2009.

âÄúMaintaining his current compensation level for one year reflects the market for someone with his skills and years of experience,âÄù she said.

Kaler lauded Maturi at the press conference for the accomplishments during his tenure and his commitment to the academics and integrity of Gophers student-athletes.

âÄúJoel is first and foremost a terrific human being and a tireless champion for this University, especially for our student-athletes,âÄù Kaler said.

Kaler highlighted the merger of the menâÄôs and womenâÄôs athletics departments in 2002, fundraising for and construction of TCF Bank Stadium and a handful of national championships in wrestling and hockey.

Former University President Bob Bruininks hired Maturi in 2002. He had previously served as the athletics director at Miami University in Ohio and at the University of Denver.

Throughout his decade-long tenure, Maturi was both celebrated and criticized for his commitment to nonrevenue sports like rowing and track and field âÄî sometimes at the expense of the schoolâÄôs hockey, basketball and football programs.

His critics point to the decline of the schoolâÄôs three revenue-producing sports, especially the football program âÄî a financial lifeline for athletics departments today.

Maturi also headed controversial hiring and contract decisions that sometimes left the University on the hook for expensive contract buyouts when a coach didnâÄôt pan out.

He fired head football coach Glen Mason, who had a 38-25 record in the time since MaturiâÄôs arrival, at the end of the 2006 season and brought in Tim Brewster the following year, who had no head coaching experience above high school.

The firings of Brewster, Mason and menâÄôs basketball coach Dan Monson âÄî two of them within just a year of signing contract extensions âÄî racked up a $4.1 million tab in contract buyouts for the athletics department.

After BrewsterâÄôs ouster in the middle of the dismal 2010 season, a group of University alumni and former student-athletes mobilized against Maturi and his search for a new coach. The group launched a campaign claiming it had been shut out of previous searches and that Maturi should not be trusted to find a suitable replacement.

In an interview with the Minnesota Daily, football booster club President Bob Hughes called Maturi a tireless worker who accomplished a lot but guessed that he may have one regret.

âÄúIf he had a chance to do things differently, he knows that the football program is the driver of everything at the U and the athletic department, and IâÄôm sure he wouldâÄôve liked to have seen more victories and more continuity in his coaching staffs,âÄù Hughes said.

Maturi said that his successes and failures with the athletics department were âÄúin the eye of the beholder.âÄù

The University put its reputation in MaturiâÄôs hands when he took over in 2002. Just three years prior, the Pioneer Press blew the lid off one of worst academic fraud scandals to rock collegiate sports: an office manager in academic counseling had completed coursework for nearly 20 current and former Gophers basketball players.

The NCAA revoked awards, records and titles. Then-head coach Clem Haskins was forced to resign and blackballed from coaching in the conference.

As a result, compliance issues are reported to the UniversityâÄôs General Counsel Mark Rotenberg, rather than the athletics director.

Throughout ThursdayâÄôs press conference, Kaler stressed the fact that Gophers athletics didnâÄôt commit an NCAA or Big Ten infraction with Maturi at the helm. But in the past decade, two scandals have tarnished the department.

The University is still in a legal battle with Jimmy Williams, who claims menâÄôs basketball coach Tubby Smith wrongly promised him an assistant coaching job.  The Minnesota Court of Appeals ruled in favor of Williams for $1 million in October. The University appealed that decision, and the case is headed to the stateâÄôs Supreme Court.

Former Gophers womenâÄôs assistant golf coach Katie Brenny also filed a sexual discrimination lawsuit against the University in January 2011 that alleged her former superior, golf director John Harris, discriminated against her and fired her for being a lesbian. Harris resigned from the program in June.

Former President Bruininks offered Maturi a contract extension in 2010 that would have kept him with the school until 2014, but he declined because the University was in the process of selecting BruininksâÄô successor.

Maturi explained at the press conference that he wasnâÄôt sure whether the next president would want him around and whether the two would have a good relationship.

On Jan. 25, Kaler said they were âÄústill in conversations about what his future will be. DonâÄôt have a deadline.âÄù

Many Gophers coaches âÄî some of whom Maturi hired âÄî attended the press conference and praised their boss for his decade in office.

Jerry Kill thanked Maturi for choosing him to replace Brewster as head coach of the football team in December 2010.

âÄúNobody really expected me to be a head coach at the University of Minnesota,âÄù Kill said. This fall, Maturi signed the new coach to a seven-year, $8.4 million contract.

Kill said that MaturiâÄôs departure puts the pressure on him and the football team.

âÄúI want to make sure that he leaves out of this thing knowing that he made the right hire,so we need to win,âÄù he said.

Dave Mona, a special assistant to Maturi who helped hire Kill, said the coachâÄôs success or failure will have a big impact on MaturiâÄôs legacy.

âÄúThe final analysis of his career has yet to be written, ironically, as it hangs on the ultimate success of Jerry Kill,âÄù Mona said.

âÄúWhen kids have issues, Joel is the first one to talk to the Trevor MbakweâÄôs, the Royce WhiteâÄôs,âÄù Smith said. âÄúHeâÄôs one of the first guys to be involved, to help. IâÄôve always been impressed with that.âÄù

Smith and the University had been working to extend his coaching contract, which expires in 2014. Kaler said that decision and all other contract discussions will be put on hold until MaturiâÄôs replacement takes over.

The next athletics director

A search firm will soon start scouring the nation for MaturiâÄôs successor.

âÄúThereâÄôs a thirst for success, but I also think thereâÄôs a desire to do it the right way,âÄù he said.

In an interview with the Daily after ThursdayâÄôs press conference, Maturi guessed that âÄúthe next [athletics director] will be far more business knowledgeable than I and far more important for that aspect of college sports.âÄù

Many have questioned whether his successor will fight as vehemently for a âÄúbalancedâÄù athletics department, with commitment to nonrevenue sports. Kaler was noncommittal about the topic.

âÄúI think obviously the next AD will have an opinion about that, and weâÄôll take that in balance as we evaluate the candidates,âÄù he said. âÄúI do share a commitment to a broad range of sports. We just need to look at the financial viability of doing that.âÄù

Maturi admitted heâÄôd like to have had more success on the football field. A trip to the Rose Bowl would have been great, he said.

Once his successor is chosen, Maturi will aid in the transition process on top of his new duties as a special assistant.