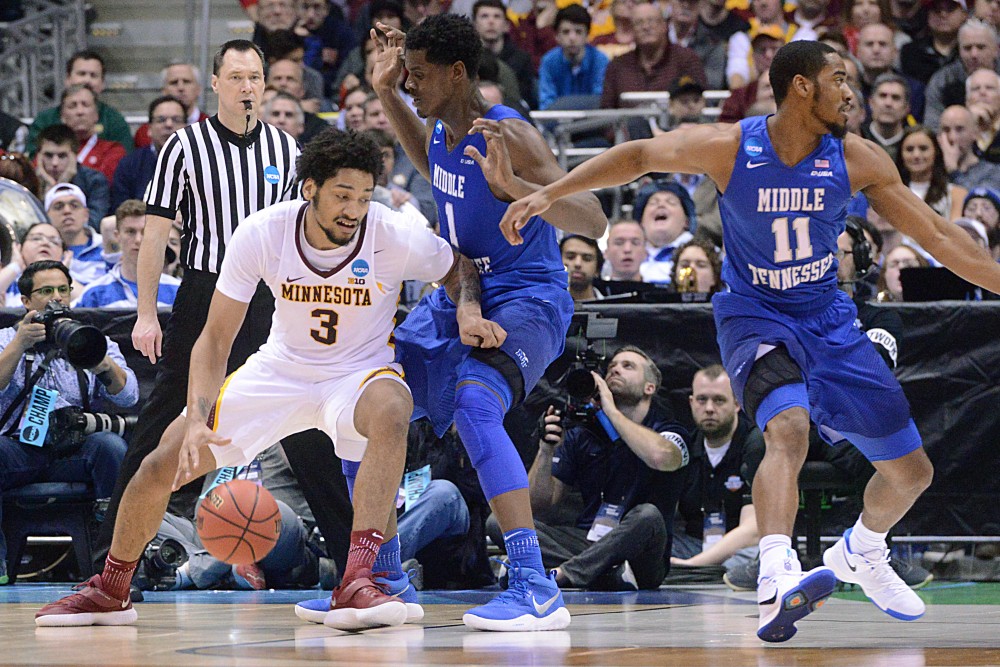 Sophomore forward Jordan Murphy looks to get around the Blue Raiders defense on Thursday, Mar. 16, 2017 in Milwaukee, Wisconsin at the Bradley Center. The Gophers played against Middle Tennessee Blue Raiders.

Minnesota’s crowd at the Bradley Center in Milwaukee suddenly had life late in the game.

The Gophers had shaved a late 17-point deficit to four in five minutes, and the Minnesota fan base was on its feet for the first time in a while.

But just as the Gophers had life, Reggie Upshaw hit a 3-pointer to spark a Blue Raiders’ run, spelling an early exit for the Gophers in an 81-72 loss in the first round of the NCAA tournament.

While the Gophers were the higher seed in the game, national pundits overwhelmingly predicted that Minnesota would be upset by the 12th-seeded Blue Raiders.

The game appeared over for Minnesota with 11 minutes left. The Blue Raiders were up by 16 but began to lose their lead.

Amir Coffey made a 3-point shot for the Gophers and hit two free throw attempts. After back-to-back field goals by Coffey and Dupree McBrayer, plus a 3-point play from Eric Curry, it was a 4-point deficit for the first time since late in the first half.

But that’s when Minnesota’s flaws leaked back into the game.

Three key players for the Gophers — Reggie Lynch, Jordan Murphy and Curry — were in foul trouble and there was nothing the Gophers could do to stop Middle Tennessee State from closing out the game.

“We were in that comeback, we were excited trying to get over the hump,” Coffey said. “[We were] trying to get it up and take the lead but just didn’t get there.”

Upshaw — who finished the game with a game-high 19 points — scored seven straight points after Minnesota brought the game within four as he took advantage of a hobbled Mason.

He extended his team’s lead to eight with 4:30 remaining, and later had three rebounds to help finish the Gophers off.

The Blue Raiders guard said after the game that his team was able to easily score on Minnesota.

“I felt like this was the perfect time for me to step up,” Upshaw said. “Shoulder the offense and try to get everybody else going.

Pitino admitted that depth was a significant problem for the team.

The team was already low on depth after senior guard Akeem Springs suffered a torn Achilles in the Big Ten tournament.

He was forced to leave Mason in even as the guard was injured and in the middle of one his worst offensive performances all season. Mason finished the game 2-10 on field goal attempts but played 38 of 40 minutes in Thursday’s loss.

“We were not very deep late in the season and that caught up to us,” Pitino said. “When you can’t sub, [it’s] really, really hard because [Mason] needed a break.”

Except for Michael Hurt, who played three minutes, every Gophers player finished with one or more foul.

Lynch, Murhpy and Curry ended the game with four fouls each.

“Foul trouble affected us a lot,” Murphy said.
“[It] may have made us a little bit less aggressive going down the stretch, so
it really hurt us.”