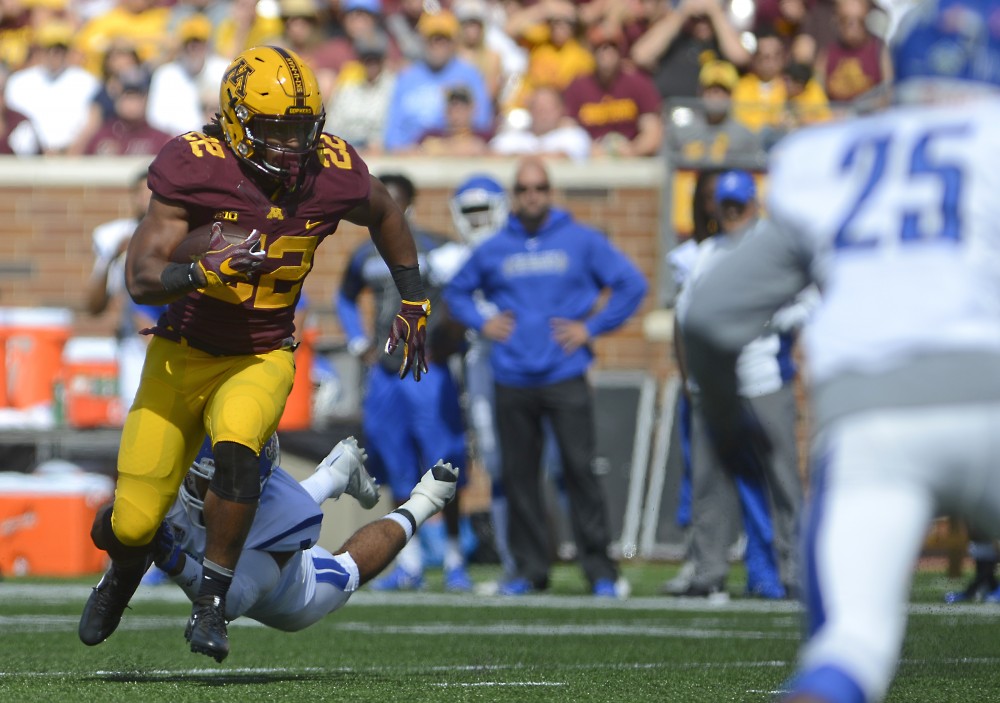 Kobe McCrary was out to prove something in his second career game.

The junior running back — who transferred to Minnesota from Butler Community College during the offseason — wanted to show the world he was more than a 1-yard running back and not just the third option behind redshirt sophomore Rodney Smith and an injured sophomore Shannon Brooks.

He accomplished his goal Saturday against Indiana State, running for 176 yards on 17 carries with two touchdowns in a 58-28 Minnesota win at TCF Bank Stadium.

“I just came [to Minnesota] and felt like I can bring some depth,” McCrary said. “All three of us [are] a three-headed monster, that’s the way I figured.”

McCrary showed what he was capable of during the second half, when he rushed for 108 yards on only six carries.

McCrary had runs of 43 yards and 50 yards on one drive — the latter giving him his second touchdown of the day.

McCrary almost ran into an Indiana State lineman at the beginning of his 50-yard run, but then stepped to the side, dodged a diving linebacker and kept running straight to the end zone.

“I just saw a lot of pushing,” McCrary said. “The offensive line blocked very well today, so I just made one cut and I saw a crease, so I just hit it.”

Cobb, who played with Leidner from in 2013 and 2014, finished with the seventh most rushing yards in Minnesota history.

“Everything he does is so similar to Cobb,” Leidner said. “We know he’s an explosive player; a really smooth runner and he can make guys miss. He’s similar to David Cobb where they are not going to truck you and run you over like crazy all over the place. For how big he is, he’s going to make people miss.”

McCrary said that he’s watched Cobb before and models his game after him.

“[Head coach Tracy Claeys and running backs coach Pat Poore] know I can catch the ball out of the backfield,” he said. “I feel like I try to expand my game a lot, watching Rodney [as well].”

Smith was the main running back during the game against Oregon State, rushing for 125 yards and scoring two touchdowns. Brooks is currently injured, but is expected to come back after the bye week to play against Colorado State.

With McCrary’s emergence, the Gophers now have three running backs who have shown they are capable of big games.

Claeys said McCrary’s role in practice will be expanded this week.

“It’s hard to get an opportunity the first game when you’re playing with Rodney in there,” Claeys said. “It’s a good problem to have what we’re going to have; the [three] people we’ll have at tailback.”

McCrary transferred to Minnesota knowing he would be the third option behind Brooks and Smith, but said he knew he could provide some depth to the group of running backs.