The men failed to advance to the team finals and no men or women qualified for the event finals. 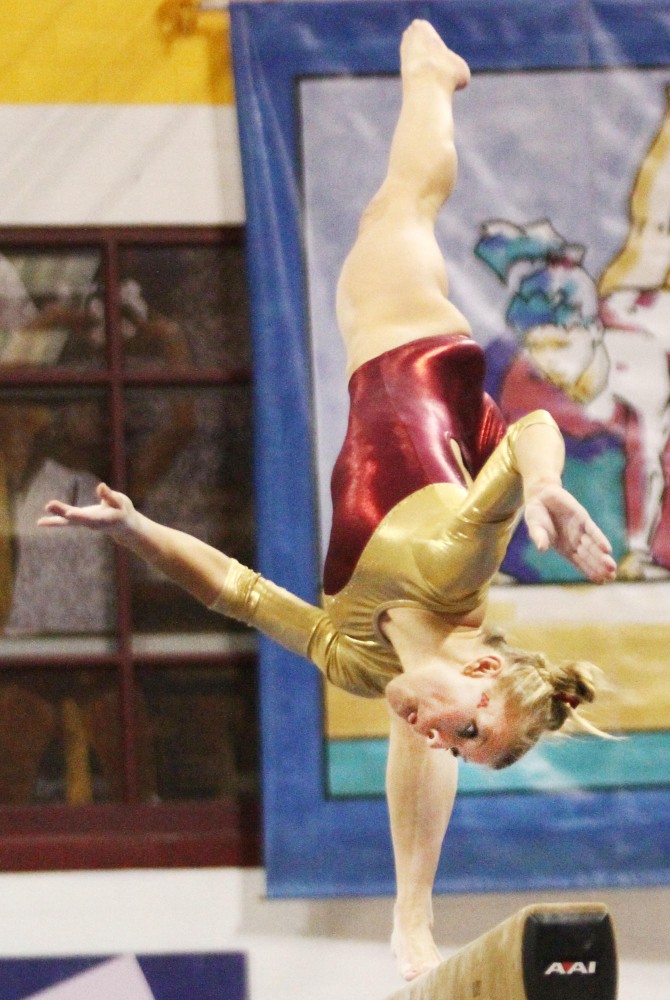 Minnesaota's Dusti Russel competes on the balance beam Jan. 28 at the Sports Pavilion.

Both Minnesota gymnastics teams’ seasons were cut short this weekend at the NCAA championships.

The men’s team failed to qualify Thursday in Norman, Okla., for the team finals for the second straight year. The women’s team sent two individual competitors, and both failed to advance to the meet’s second day.

The Gophers men’s team was seeded third in its session but placed fourth, one spot short of making the finals.

“[I’m] pretty disappointed. We didn’t perform at all like a team that should be in a team final. We performed like a fourth-place team,” head coach Mike Burns said Thursday night. “We didn’t compete like a championship-level team.”

No. 2 seeded Illinois placed first in the session with 356.25 points. No. 1 and host Oklahoma followed in second with a 356.2. No. 4 California-Berkley bypassed Minnesota to claim the last qualifying spot with 351.15 points. Minnesota finished well behind at 343.35.

Illinois and Oklahoma finished in the same places at the team finals Friday. Penn State rounded out the podium.

Illinois is now the reigning Big Ten and NCAA champion.

“I’m really happy for Illinois and for the Big Ten,” Burns said.

Although Minnesota did not compete at the team finals, individual gymnasts did advance on each of the six apparatuses to attempt to qualify for Saturday’s event finals.

Of the eight Minnesota gymnasts that made qualifiers, three were seniors, one was a sophomore and four were freshmen.

However, none of the eight placed in the top-10 of their events, the mark necessary to move on to the event finals.

Senior Russell Dabritz came the closest with an 11th-place finish on the parallel bars.

His 14.9 slowly dropped down the scoreboard as more competitors performed. When it eventually fell out, Dabritz said he was not surprised.

“I should’ve done a lot better. … I had a couple hand placements that took a lot of tenths off. … I couldn’t have expected to make finals after that,” Dabritz said. “I’m disappointed, but it’s not a huge deal.”

“It’s been kind of setting in the last week or so, but having it finally set in is pretty nice,” Dabritz said. “I’m definitely done. My body hurts, and it’ll be nice to try new things.”

Burns said his feelings toward the five graduating gymnasts are a little more bittersweet.

“It’s always hard when you get to the end of the season and you know your guys who are done with their careers and all the time and effort that has gone into preparing them for these meets,” Burns said. “It’s obviously time well spent, but they’re going to move on to different aspects of their lives.”

After a season of disappointing fourth-place finishes at postseason meets, Minnesota will look forward to strengthening the 26 of the 36 NCAA routines that will return.

DJ Repp was one of the six seniors nominated for the Nissen-Emery award for outstanding gymnastics, academics and sportsmanship. Illinois’ Paul Ruggeri won the award at the onset of the NCAA championships.

Two women done after one day

Minnesota’s women had two NCAA championship competitors, and they finished their meet Friday in Duluth, Ga., after one day.

Sophomores Kayla Slechta and Dusti Russell placed 14th and 16th in their session of the all-around with a 39.05 and a 38.9, respectively. Each was well behind Florida’s eventual-champion Kytra Hunter’s 39.725.

Russell almost qualified for Sunday’s event finals. She tied for 12th on the balance beam with a 9.85. She was only .025 points away from qualifying after what head coach Meg Stephenson called the “best routine she’s done all year.”

“They developed a lot of consistency over the season,” Stephenson said. “We’re so proud of both of them, and they’re only sophomores, and they have such a strong team that they’re a part of. … Needless to say, we’re really, really excited for next year.”

Although Russell faltered on uneven parallel bars with a 9.425, she said her first experience on the national stage was positive. However, it could have been improved by having the entire Gophers team competing.

“Going in as an individualist is very hard, which is why we are going to do everything we can to get our team in next year,” Russell said. “Being a team there, you might get a little more credibility from certain judges.”

Slechta said she agreed that Minnesota’s team has the potential to compete at the NCAA championships next year.

“We are not far away from those teams that went, and … we are good enough to be there,” Slechta said.

The Gophers will only graduate three seniors. Slechta has two years of national experience, and Russell has one. Stephenson said the sophomores can help inform the team about what it takes to compete nationally.

“We’ll give them an opportunity to kind of share their experience and what they learned,” Stephenson said. “That’s always a very educational part for the rest of the team.”

Alabama repeated its 2011 triumph with another NCAA team championship. Florida and UCLA followed in second and third.