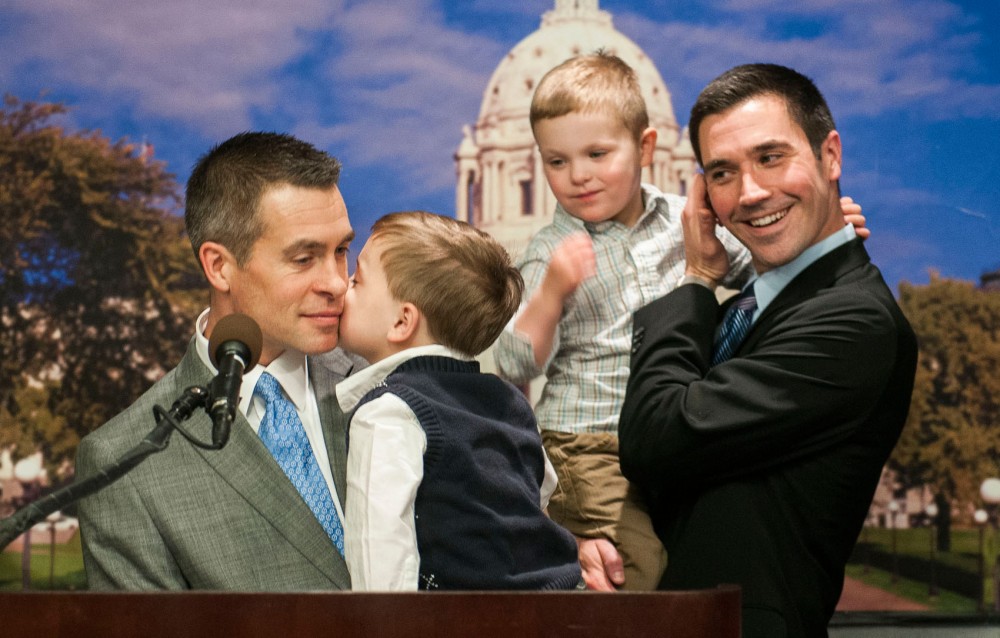 Paul Melchert (left), a pediatrician, speaks to the media about his support of the legalization of gay marriage while accompanied with his partner James Zimmerman (far right), and their two sons, Emmett (left), and Gabriel Melchert-Zimmerman (right). Sen. Scott Dibble and Rep. Karen Clark, chief sponsors of the bill to legalize gay marriage in Minnesota, held a press conference introducing their bill Wednesday at the Capitol.

A bipartisan bill to legalize same-sex marriages in Minnesota was introduced at the state Capitol on Wednesday morning.

Sen. Scott Dibble, DFL-Minneapolis, is sponsoring legislation that would repeal the state’s 1997 ban and let same-sex couples wed in Minnesota.

It would allow — but not force — Minnesota’s religious institutions to perform and recognize same-sex marriages.

“The journey has been long, it’s been hard fought,” said co-author Rep. Karen Clark, DFL-Minneapolis. “Minnesota spoke so loudly during this last election. We’re ready to take the next step.”

Dibble, who, like Clark, is openly gay, said it’s time for the Legislature to settle the issue.

Set to be formally introduced for the House and Senate on Thursday, the same-sex marriage legislation is getting support from both sides of the party line — but will still face resistance in the coming months.

GOP activist and former state auditor Pat Anderson supports the bill, and Sen. Branden Petersen, R-Andover, signed on as a co-author, the first Republican lawmaker to do so.

“This is not a partisan issue,” Dibble said. “This is an issue that is shared broadly because the values that it speaks to — the values that unite us,” like love and family.

Jake Loesch, spokesman for Minnesotans United for All Families and a Republican, said having Republican support is something that’s really important for their campaign to legalize same-sex marriage.

“Folks … from all political backgrounds believe in the freedom to marry and support it,” he said.

University of Minnesota political science professor Howard Lavine said it’s a “hot-button issue” that will gain a lot of buzz.

The movement is facing heavy opposition from both state and national organizations.

The National Organization for Marriage, an organization that opposes same-sex marriages, pledged to spend $500,000 to defeat any Republican legislator that votes for changing marriage laws in Minnesota.

Minnesota for Marriage, another opponent of the legislation, campaigned in the fall to pass a constitutional amendment to prohibit a same-sex marriage bill, said spokeswoman Autumn Leva.

In November, 52.5 percent of Minnesotans voted down or didn’t answer the ballot question on same-sex marriage, which both count as “no” votes.

People statewide have expressed confusion and concern, Leva said. Just because their vote counted as a no, that doesn’t necessarily mean they’re in support of same-sex marriages.

“I think legislators are becoming aware that a vote against a constitutional amendment is not the same as a vote for legalizing gay marriage,” she said.

Leva said the organization will speak with legislators as the session moves forward to advocate against the bill.

The likelihood of the bill passing is uncertain, and proponents will use forthcoming committee hearings to challenge the views of same-sex marriage opponents, Dibble said.

Some DFL legislators from rural areas are expected to oppose the bill despite their party’s tendency to back it, while Clark said she expects some Republican legislators to support it.

The bill would repeal the state’s 1997 law that bans marriage between same-sex couples.

The legislation is expected to be discussed in the Senate Judiciary Committee and the House Civil Law Committee in the coming weeks.

Kathleen Hull, sociology associate professor at the University, started her sociology of sexuality class this semester with an anonymous survey about same-sex marriage.

Of the 50 students questioned, 96 percent said they agree with legalizing same-sex marriage, she said.

“I think the student body is kind of much skewed towards acceptance,” Hull said. “Most students don’t really understand why this is even an issue.”

Anthropology senior Anastaisha Lee, a proponent of same-sex marriage, said the state has waited too long to move this forward and said she hopes it passes this year.

Lee, co-chair of the University’s Campus Atheists, Skeptics and Humanists student group, said the organization discusses same-sex marriage, as well as other gender, sex and religion topics at the group’s meetings.

Although same-sex marriage supporters are typically more vocal on campus, there are student opponents, as well.

Originally raised in a Buddhist home, architecture senior Bang said after attending Bible study two years ago, she realized homosexuality is “a rebellion against God.”

“We’re not respecting our bodies if we’re going to use them against nature. … Nature tells us already that it is one man and one woman,” Bang said.

On a college campus, students who oppose same-sex marriage legislation can often be characterized as homophobic, which Hull said isn’t necessarily accurate.

Homophobia is an outdated term and used as shorthand for people who have clear negative perceptions of sexual minorities, she said

“The problem with the term homophobia is it implies any dislike, discrimination or bigotry towards sexual minorities based on fear — that’s not always the case,” Hull said.

Academics use “heteronormativity” and “heterosexism” instead when discussing society’s “privileging of heterosexual identities and practices,” she said.

“We never called racism people-of-color-phobic,” she said. “We kind of recognized other forms of bigotry are based on more than just fear of the group.”

Most opponents of same-sex marriages express their concern about children and their belief that they deserve to be raised by their two biological male and female parents, Hull said.

“They’re not comparing apples to apples,” she said. “When those kinds of studies are done, so far, [same-sex parents] really haven’t shown any negative effects on kids.”

She said the data from the surveys in her course consistently match the national studies.

Students at the University who know someone who is gay are more likely to support the proposed legislation, Hull said.

“People who believe homosexuality is a choice are less likely to support it,” she said.

Beau Miller, a biochemistry and genetics, cell biology and development junior, said he campaigned against the marriage amendment last fall with Minnesotans United.

With the movement for legalizing same-sex marriage picking up again this spring, Miller said he’s likely to talk to his legislator about passing the bill.

He said he’s optimistic about it passing.

“A lot of other states have been doing so, and it’s likely that we are going to follow suit,” Miller said.

“Economic issues tend to be technical and difficult for people, whereas sociocultural issues, like gay marriage, are very easy,” Lavine said. “You don’t have to have a lot of information to know if you are for it or against it.”